A look back at 2008 Donruss Americana (A TCIC Feature)

2011 Panini Americana has been on the shelves for a few days now, but Donruss Americana has been in existence for nearly five years. The 2008 issue was the second series, and was numbered 101-200. Subsequent sets would restart at card number 1.
This is just a look at a few of the base cards, of course.

Rob Schneider has never hit it big, but his movies are still enjoyable. I love that image of Peggy Fleming, as it captures her in a way that makes her look like just another girl headed off to the ice rink. Diane Franklin may be a nobody to most of you, but I remember her as one of the princesses in Bill and Ted's Excellent Adventure.

Ed Asner is insanely old, and has worked on nearly 300 movies and television shows. Most of his acting now is voice work, but I remember him most in Elf. Yes, Elf. I met Erik Estrada a few years ago, and he's a great guy. Arielle Kebbel is another one of those B-level actresses I attached to, this time from Gilmore Girls and American Pie Presents Band Camp. I like the strangest combination of shows, don't I?

John Cusack's sister is the most annoying woman on film. John Cusack, on the other hand, is not. I know he was in a bunch of 80s movies, and Eight Men Out, but I liked him best in High Fidelity. I'm not sure why. Taryn Manning draws me in for some reason, and again, I can't figure it out! Maybe it's from Crazy/Beautiful, a Kirsten Dunst movie that never really took off. Gigi Edgley is a name you won't know unless you're a Farscape fan. I never got into the show, but I met her once at a convention and she's such an amazing person. She was signing autographs, along with a few other actors from the show. 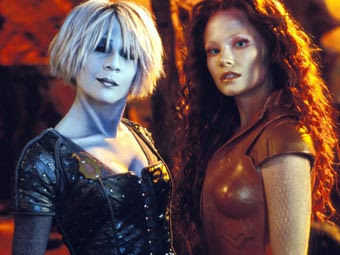 Gigi is on the left in full makeup, and Raelee Hill is on the right. They were side by side, and I picked a photo of Gigi in the same outfit you see. The two ladies weren't exactly busy at the time (all the Farscape fans must have been in a panel), so they proceded to have a discussion about Gigi's breasts and how kinky her outfit was. It was an interesting conversation to be a part of, to say the least. Raelee gave me a similarly "kinky" (her words) signed photo (see below for image). It was certainly an experience! Both of them are Australian (I love those accents) and with Virginia Hey I have three autographs from Farscape. Virginia Hey was also a James Bond girl, which is why I grabbed hers. 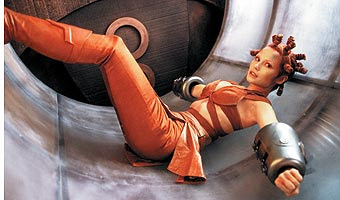 One of the fantastic parts about fan conventions (including the National show) is meeting actors or sports heroes and being involved in their discussions. It's something I miss living here in San Francisco. DragonCon is a country away, and ComiCon is impossible to attend.

So, what makes the Americana series so cool? It brings me the opportunity to own cards, relics, and autographs of actors and actresses I otherwise wouldn't have access to. The names don't need to be big, as long as they bring a connection to someone. I can't afford or validate buying a hobby pack of the product, but my personal collection is full of relics and autographs from the Americana series.
at 5:11 PM