This Card Is Cool: A League of Their Own 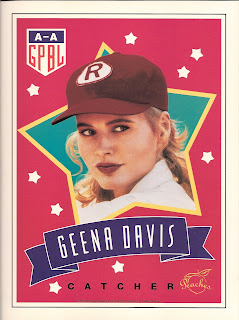 Flashback: 1992. That was a big year for me. In February, for the first time since before preschool, I moved. For the first 13 years of my life, I lived in the southern San Francisco Bay Area, and most of that was spent in the same apartment in Santa Clara. It was off to Georgia for me! With very little else going on, I dove headfirst into collecting. 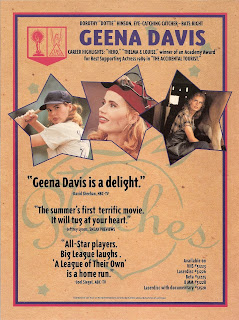 Things happened outside of my life, too. It was a leap year. George HW vomited on the Japanese. We elected Billy Jeff as president. LA erupted in riots after the Rodney King verdict. Euro Disney opened. 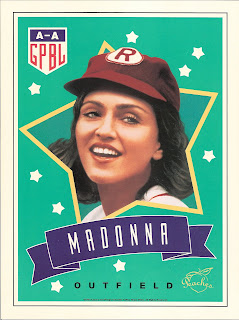 The highest-boxing movie of the year was Aladdin, but coming in at number ten: A League of Their Own. 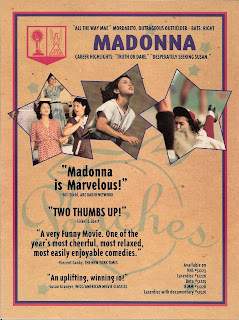 If, for some reason, you haven't seen the movie in the past 20 years (yes, it's been that long), you're missing out. Any list of top five baseball movies should include A League of Their Own. While we're at it: the other four, in my mind: Major League, Field of Dreams, The Sandlot, and Bull Durham. 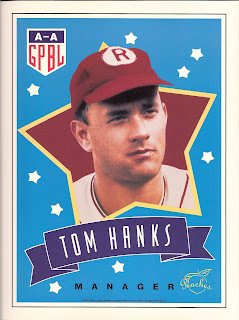 The movie stars my favorite actor of all time, Tom Hanks, and introduced me to Geena Davis and Lori Petty. I met Lori Petty a couple years ago, and she is an amazing person. She reminds me more of her Tank Girl character than anything else, and is a lot of fun to be around. 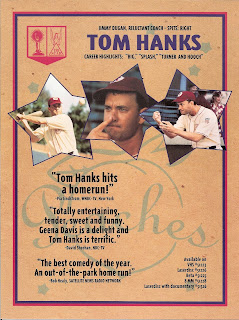 I've seen these cards here and there over the years. They're full-page size. I didn't measure them, but I believe they're 8.5" x 11". Printed on the same kind of card stock you'd find on 1992 Topps cards, the three-card set features one card for each of the three "biggest" actors in the movie. The backs feel like promotional trading cards, with positions and career highlights. The cards were in their own pack, the front of which looks like this: 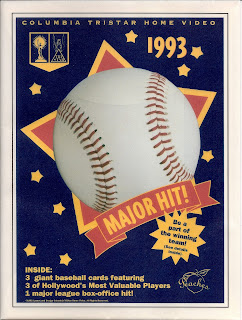 As you can see, the "cards" were released as a promotional item when the movie hit VHS in 1993. Their large size means I can frame and display them prominently when I have a place to do so.
This is the only card set devoted to the movie. I would love to see a trading card set with all the main characters inserted into a premium DVD/Blu-Ray release celebrating the 20th anniversary of the movie.
If you like the topic of AAGPBL, there are several books (I have three which I haven't read yet: The Women of the All American Girls Professional Baseball League, Girls of Summer, and When Women Played Hardball).  There is also a large (421) card set issued by Fritsch Cards. It's one of my most-wanted items.
at 5:01 PM

Labels: This Card Is Cool