Hungry for some pack busting!

I took some of the last of my cash to Japantown here in San Francisco and browsed the offerings of a couple of the collectibles stores. I get the impression that most Japanese don't do cards. Most of the collectibles stores around here carry figurines, and they aren't made by McFarlane. They generally focus on anime and cutesy things. I grabbed a few promising pieces and ripped them open when I got home.
If you're not familiar with these things, they're packed in a bag or box such that you can't see what's inside, just like a pack of cards. There are several different options, sometimes with variations. Until you open the package, you don't know which figure you have. It seems that at least with some releases some figures are more rare than others, especially with some of the variations.
The first of three packages I bought was a small key chain/backpack fob thing labeled "FOOD" in English. Each piece is packaged in a little sealed plastic bag; the box contains pictures of all the possibilities. Inside each package is a list of figures and probably information on rarity. You can enlarge the scan to see all the options. It's difficult scanning these things since they don't properly sit flat.

These are mostly desserts, though the burger and the pancake stack look great. I ended up with figure 2: 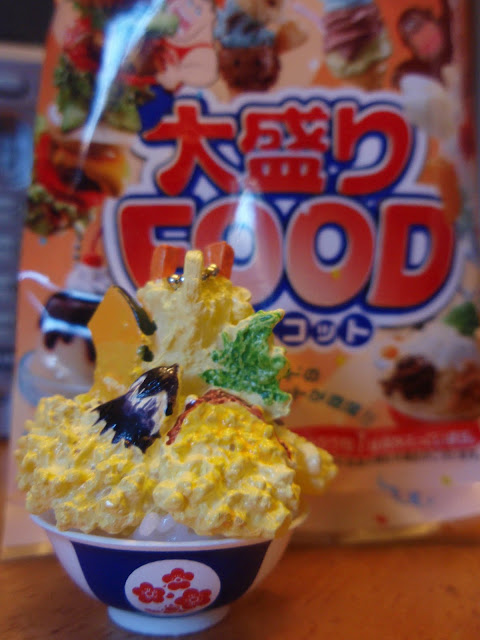 You can see the key chain attachment at the top. Yummy, right? I'm not even sure what this is. I'd prefer a dessert. I'll probably buy one more just to try for a cool dessert.

The next piece came from different food set. They look like sushi. I don't eat sushi, but as far as food goes it's one of the most beautiful. Someday I may give sushi a try. In the meantime, here are my non-edible food choices:

Really, I couldn't go wrong with any of the pieces. I pulled item 12, which looks really cool especially when I photography it using a macro lens: 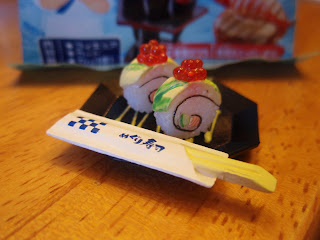 The chopsticks are plastic. The whole piece is. Some assembly required - the plate, two pieces, and chopsticks are all individually posable, if posing food is your thing. I may have to buy several more of these. If you want a size comparison, the plate is a little bigger than a quarter.

The third and final piece was of something you wouldn't normally want around your food. We're talking life-size bugs, here! I thought this would be kind of fun. While the other two came in bags, this set comes individually boxed. It's still a mystery which figure you receive until you open the box, and to make things even more exciting, one of the figures is a mystery figure. Here's the sheet:

The non-beetles are the most attractive, though all of them are enticing. I had a 50/50 chance of pulling a "cool" figure. Did I? No. Well, it's still cool, just not my favorite: 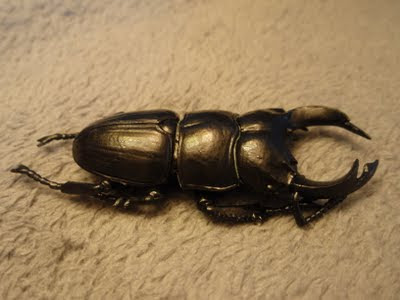 That's one big beetle thing. For a size comparison, it's about the same length (left to right as you see in the picture) as a baseball card, though it is a little narrower. As far as I know, it looks real. Unless you flip it over - it has a tiny, powerful magnet so you can put it on your fridge and freak out your parents, wife, sister, etc. Being a larger figure, it was a bit more expensive, but I may buy a couple more.

I really like the food ones, and there were some larger options that I might explore next month. This is my first time opening non-character packages. I usually pick up cool-looking anime ones, and I never attempt to finish a set. Here's one I bought last time I browsed the shops (nearly a year ago): 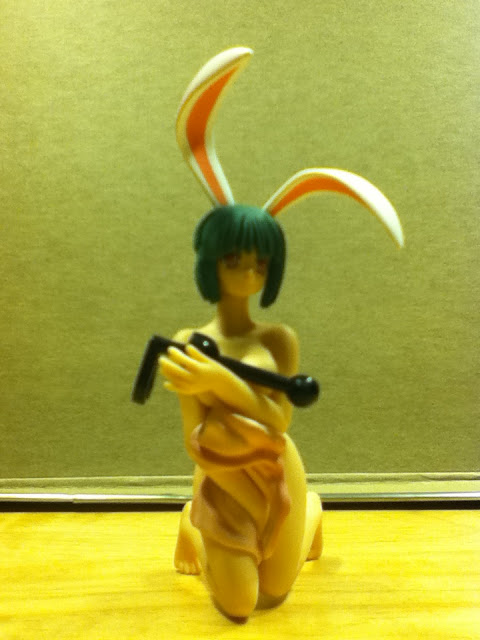 I took this photo with my iPod, so it's blurry. She's cute, and naked. I put a small stand piece to cover up some naughty bits. Most figures aren't so revealing, and are great little displays.

I'm not about to stop collecting cards, but these are fun little diversions from two-dimensional pictures of men!

Speaking of being hungry, I spent the last of my cash yesterday and now I want some fried rice for dinner. I wonder if they take debit...
at 5:45 PM