Back to Back to the Future II

A very large portion of my collection awaiting me back in America is non-sport cards. How large? I have over 750 different sets, not counting the dozens I've picked up here in Japan. There are still more than 500 sets I'd like to get, but let's be honest - my focus is on baseball and Japanese cards right now, and with shipping prices as they are, I'll have to come across a dealer with cheap sets I need at a card show to be able to afford it. 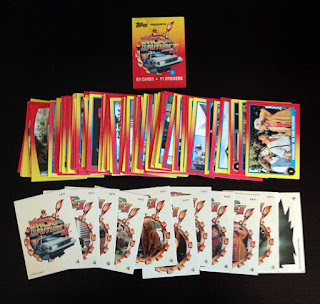 One of those sets in the "need" column is the set Topps issued in 1989 for Back to the Future II. Like most of America, I was all about this movie. I probably had at least a few cards from this set pulled from packs with, of course, chalky bubble gum. The full set has 88 cards and 11 stickers.
Once relegated to the junk bin, the continued interest in this movie series (including today being the date they travel to in the future) has created a premium on the set. Sets on eBay run about $20. Maybe I'll have some luck getting it cheap at some point in the future...

Who Should Be in Americana?

Recently, the question of who should appear in a Panini Americana set has been posed. And while Panini themselves never asked me personally, I'm always glad to chime in about my opinion. While some of the people below might have appeared in other Americana or pop culture sets this is my perfect set. It's packed with superstars but there are some smaller "minor" celebrities who I feel deserve a card - and who I'd be happy to get a hit of.

So, without further annoying commentary, I give you my Americana checklist. 162 cards, so it'll fit evenly in 9-pocket pages. 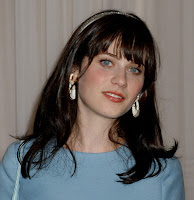 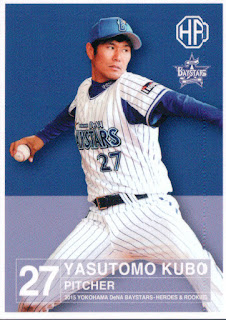 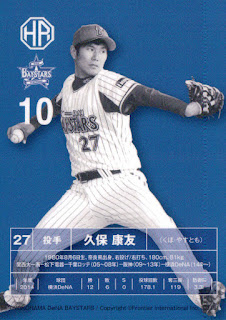 Frontier has seriously cut back its releases this year, though they did issue a Heroes and Rookies set for the always-collectible BayStars. (Seriously, why are they so popular with collectors?) The base cards are pretty simple, but I do like the design. The backs use a black and white verion of the front photo and include some basic statistics. This set isn't about the base cards, though.

In addition to the full 15-card base set, each box contained one or two autographs. 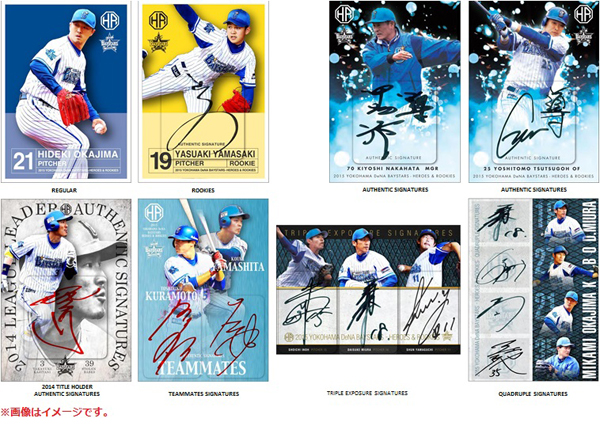 Additionally, special autograph cards are all serial numbered and have red ink parallels; some cards also have inscription parallels.
Original information stated there would be 15 Authentic Signatures cards and two Triple Exposure Signatures cards, but perhaps one of the signers didn't return their stickers or they were unusable. In all, I count 874 signatures, which puts the total set print run less than that, but at least 437.
at 3:00 AM No comments: 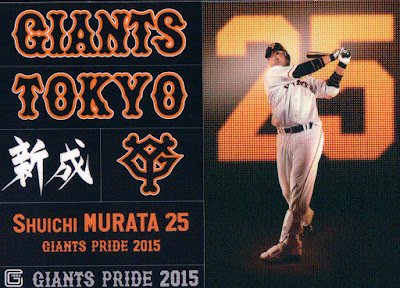 The Giants issue a series of stickers every year similar to a card set under their "Giants Pride" brand - this brand is also seen in a BBM insert set and other souvenirs and marketing materials.

The 2015 stickers are pretty easy to identify due to the year located on two of the stickers found on the card-sized sticker sheet. There are also Giants and Tokyo text-logo stickers, the Yomiuri Giants interlocking YG logo, some fancy kanji that I don't recognize. The largest sticker features one player in front of a "scoreboard" featuring his jersey number. The backs are blank.

I'm not really sure how the Giants issue their annual cards/stickers, though the fan club may have something to do with it. I picked my copy up at one of the Tokyo-area card shops. Anyone with additional information on distribution is certainly welcome to comment below!
at 3:00 AM 1 comment: 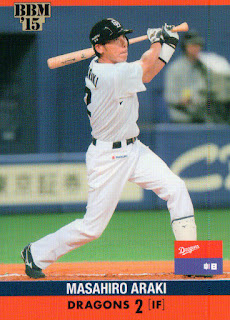 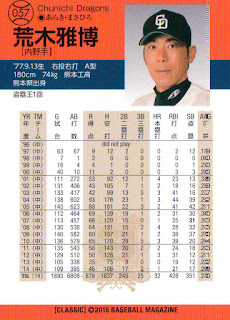 BBM's now-annual throwback, Topps Heritage-style, is in its third year, and is exactly what you'd expect from the card company at this point. And that's not a bad thing - Topps Heritage has a core "formula" that works and BBM seems to have found a good release format.

Unsurprisingly, the set's base design is a standard-sized, modern version of the 1993 issue. There is a "Classic" watermark behind the statistics, and BBM uses its standard copyright line now. But the logo on the front is true to the original, and the logos are similar-style. There are 72 active players in the set which use the '93 design. 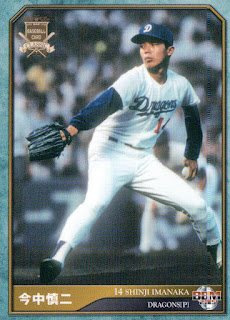 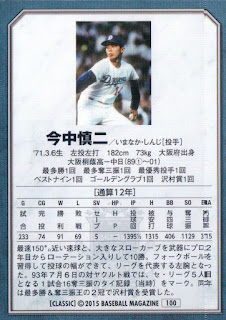 The remainder of the set uses a marble-bordered original design similar to last year's issue, with 36 "OB" (retired) players rounding out the set at a total of 108 cards. 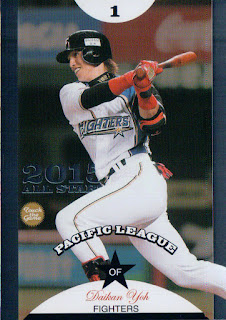 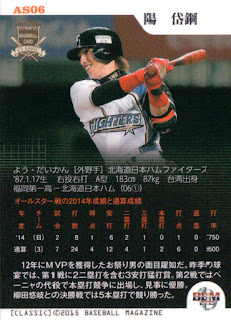 BBM didn't issue many inserts or special sets early on, so the inserts borrow from other sets. The 24-card All-Stars insert set is taken from the 2002 Touch The Game insert of the same name, with a parallel version. 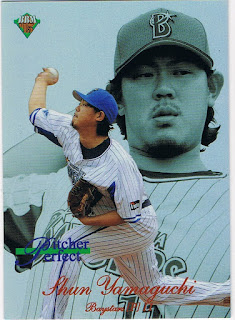 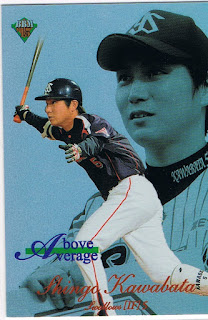 The 1999 Diamond Heroes insert sets "Above Average" and "Pitcher Perfect" are reprinted in 12-card sets, 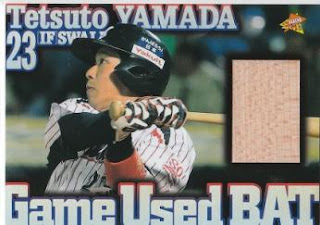 Relics are found in the 2000 Diamond Heroes memorabilia design. 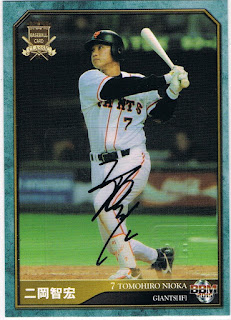 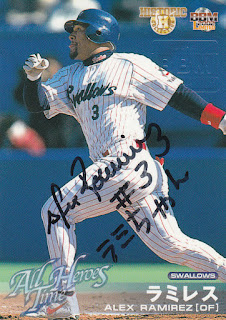 I enjoy this set. I don't have the original BBM base sets (except 2014); if I stick around long enough in Japan and money flows freely enough I'll certainly be tempted to go after a full run.

I now have all three base sets and I intend on continuing the collection. Seeing the throwback designs on the insert sets is certainly great, but I wish they would be true to the year. As I said before, BBM didn't really issue insert sets in 1993, but they could have possibly pulled from the subsets. BBM issued team logo holograms that year which would have been a fun pull, and there are some short prints found early in the set which could have been used.

That said, 1994 is when BBM really started getting insert sets and other issues, so they have more to choose from for the next release. Again holograms were inserted, but in 1994 they featured players. There are also the Electric MVP insert cards found in the All-Star box sets and Perfect Pitching, a special set issued to honor Makihara's perfect game that year. They could also issue an insert set or subset borrowing from the 1994 Tigers box set design, or using the Sluggers set design. And while I like the design for the OB players, BBM could should be using the "Nostalgic Stars" subset design instead.
at 3:00 AM No comments:

It's probably too late now to call most of these "new releases" but I would still like to summarize the other sets that have been released this year. 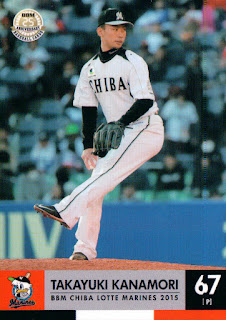 The Marines set has a very blocky design, including a tri-colored rectangular border at the bottom on the front, repeated on the back. Otherwise, the design is similar to BBM's other team sets - 81 cards in all, with a few subsets included. Each subset has three cards. 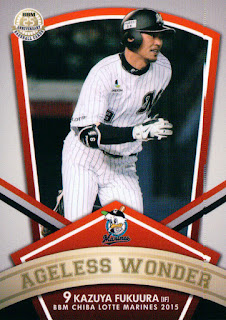 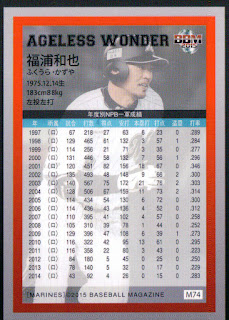 First is Ageless Wonder. This small subset has the old veterans of the team - Fukuura here has been with the Marines since 1997.

I don't get "Real Steal" by name. I figured at first it would be players who are great on the base paths. But it's quickly obvious that it's not about runners. Instead, it appears to be players who joined the team and then performed well. 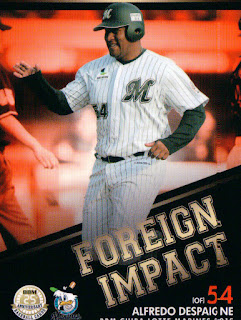 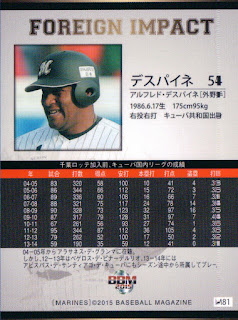 Last is Foreign Impact. As you can probably guess, it features foreign players. Despaigne played his early career in Cuba, and the stats reflect that (the season plays over the winter). 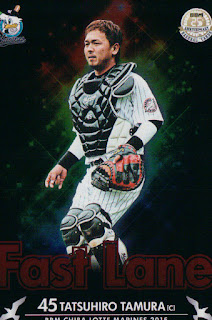 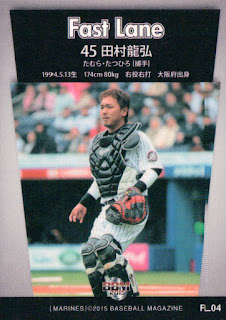 The Marines got three insert sets, though they total 18 cards like most of the team issues. Fast Lane is the "first" with six cards. There doesn't seem to be a point to this set other than "ooh shiny!"

Likewise, the three card "Spring Fever" set has a green "spring" feel but ... why is it here? Why are these players on these cards? 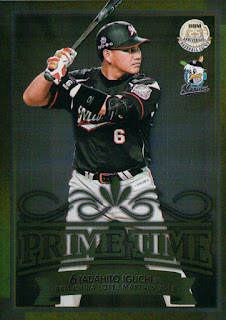 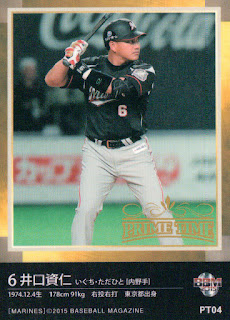 The "premium" insert is Prime Time, a nine card set with double foil! That's about all that makes this set premium.

Speaking of premium, there are several autographed cards to be found. 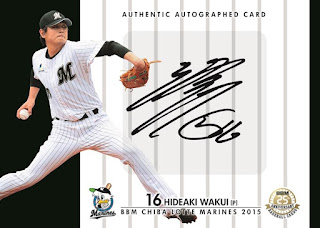 Base autographs can be found for 70 subjects including three mascots; print runs are up to 60 copies each. A total of 3701 cards were inserted into packs. 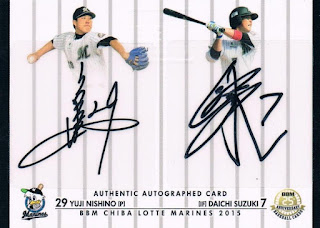 Combo signature cards are much more rare. BBM didn't release information on their website, but I found details that show three cards were issued: 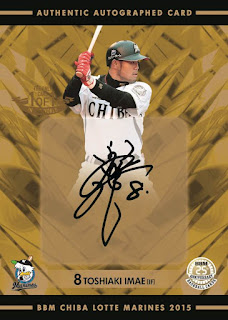 Also found in the Marines set are the "insert" autograph cards. Silver and Gold versions are available - silver print runs are usually 5, but two players have print runs of 10 and 12. All gold cards are 1/1. 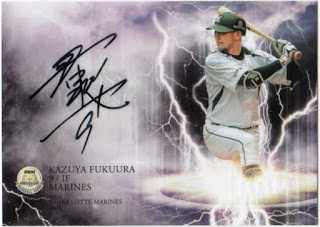 Finally, the cross-brand autographed cards are found for three players with a print run of 15 copies each.