Aikatsu: The Card Game Sweeping the Nation (in Japan, at least)

You can forget about Pokemon. The latest craze for little boys is Yokai Watch. But that's for another day. Instead, let's talk about something for girls... and old men?

Aikatsu is a card/video game of sorts, which is basically slang for "Idol Activities" in Japanese. The game is based on collectible cards, similar to CardGen, which instead of players feature articles of clothing. You use these cards to "dress" your idol, which helps her to pass auditions and become more successful.

The game came into being in late 2012, and continues to be highly popular today. There's an anime (cartoon on TV), movie, and two Nintendo 3DS video games. Plus a manga (comic book).

Many elementary school girls are obsessed with this game, and I've been curious about it for a while now. I've come to find out that many adult men enjoy playing the game too, which is kind of disturbing but not so surprising when you know how obsessed men can be with idols and games.

I'm still learning and I'm interested in sharing more details with you. The official website (in Japanese only) has images of all the cards, and several of the special cards feature actual performers. I'll have some regular cards for you at some point to share (because, hey, it's fun to try to figure this all out), but I'm currently trying to build a set of all the performer cards. 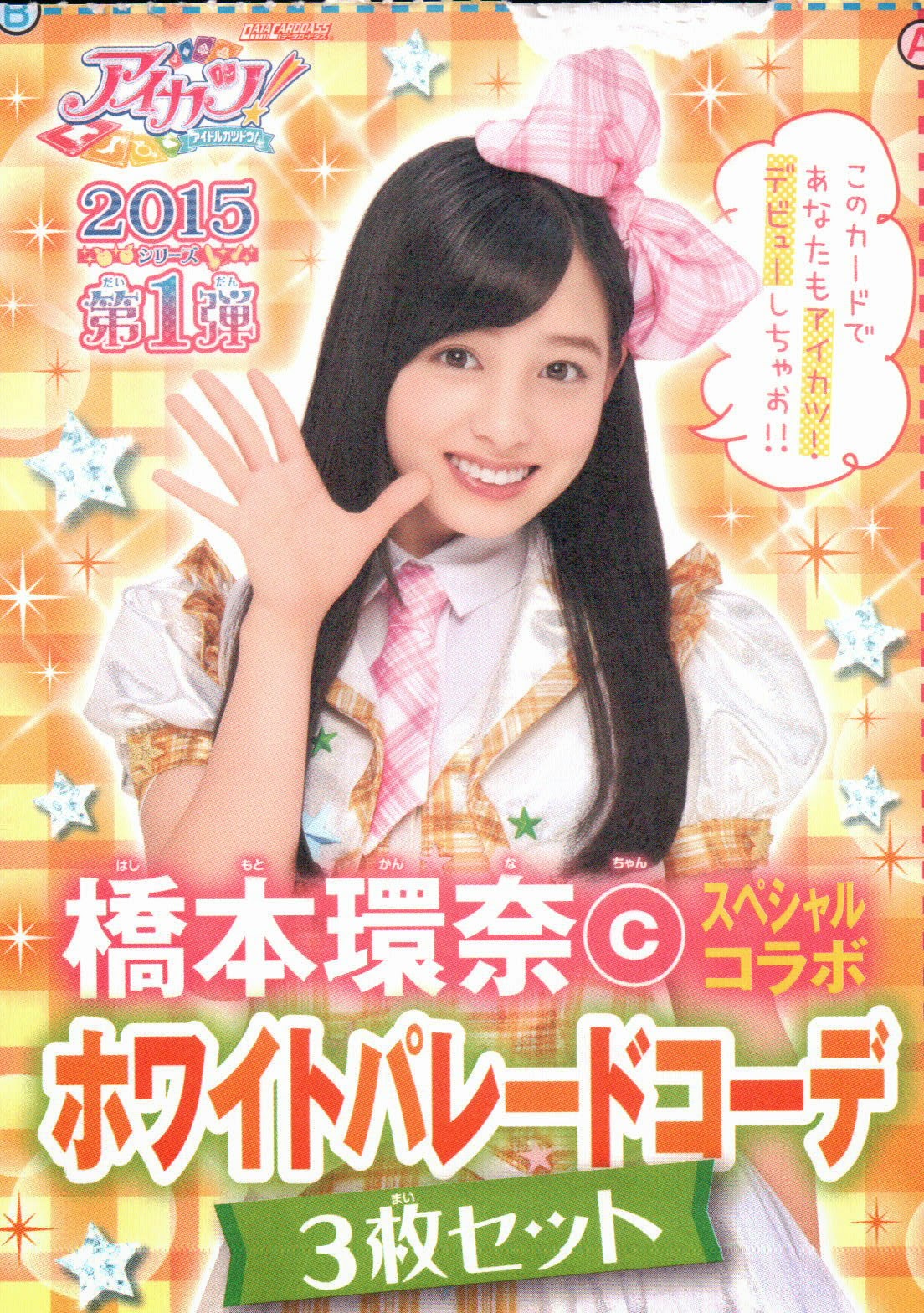 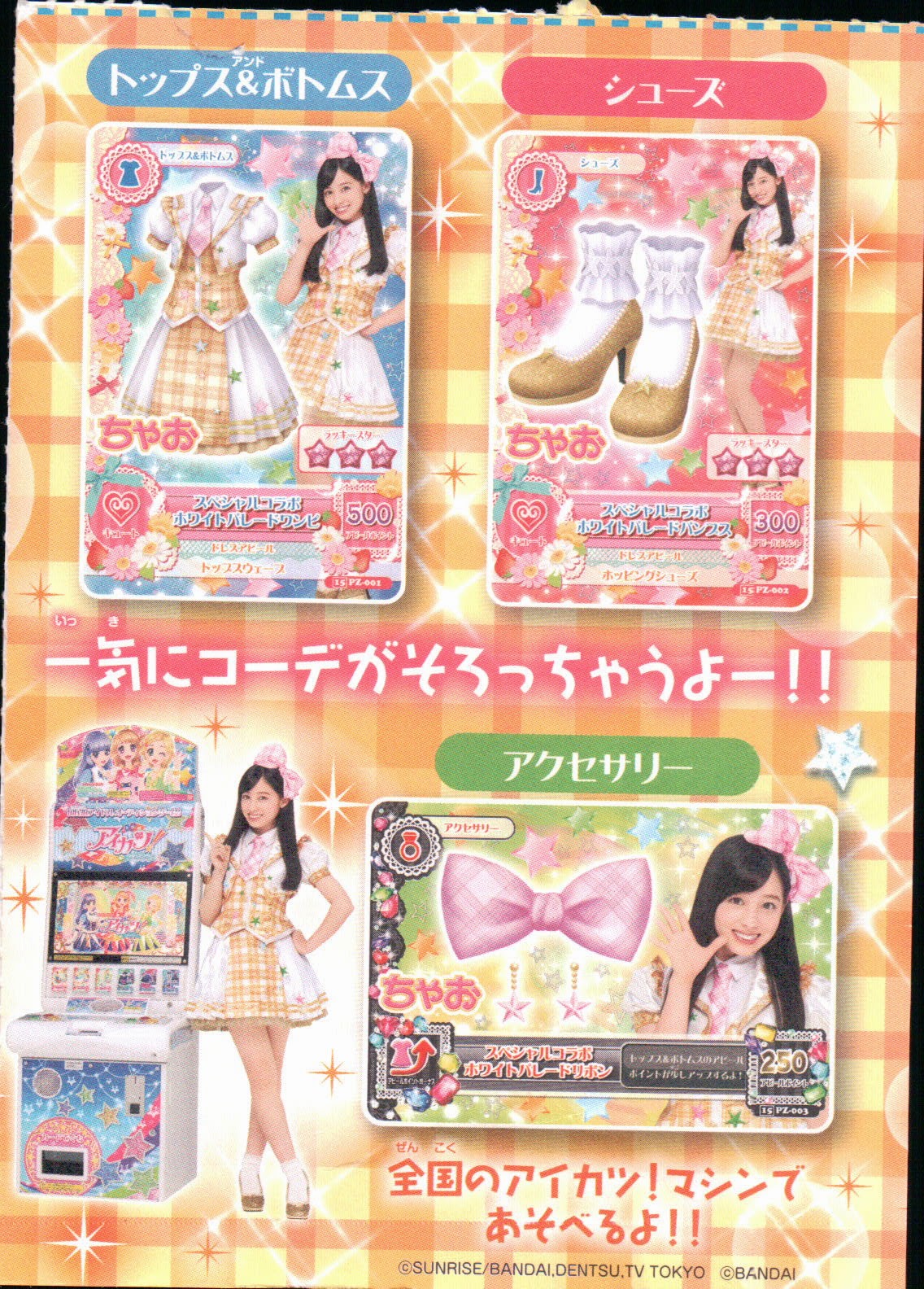 I first discovered that the above girl, Kanna Hashimoto, has a few promos for the 2015 first series set. All three are pictured above.

The outfits coordinate, with tops, bottoms, shoes, and occasional accessories. The accessories might not exist for every outfit; I haven't figured that out yet and I'm not sure I want to put in the time to find out. 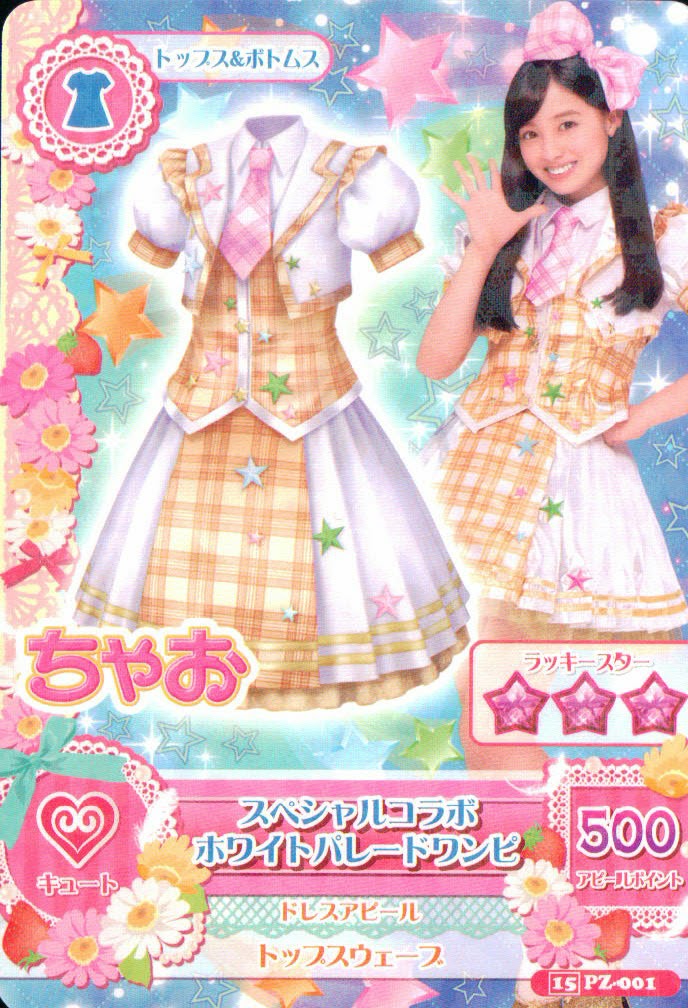 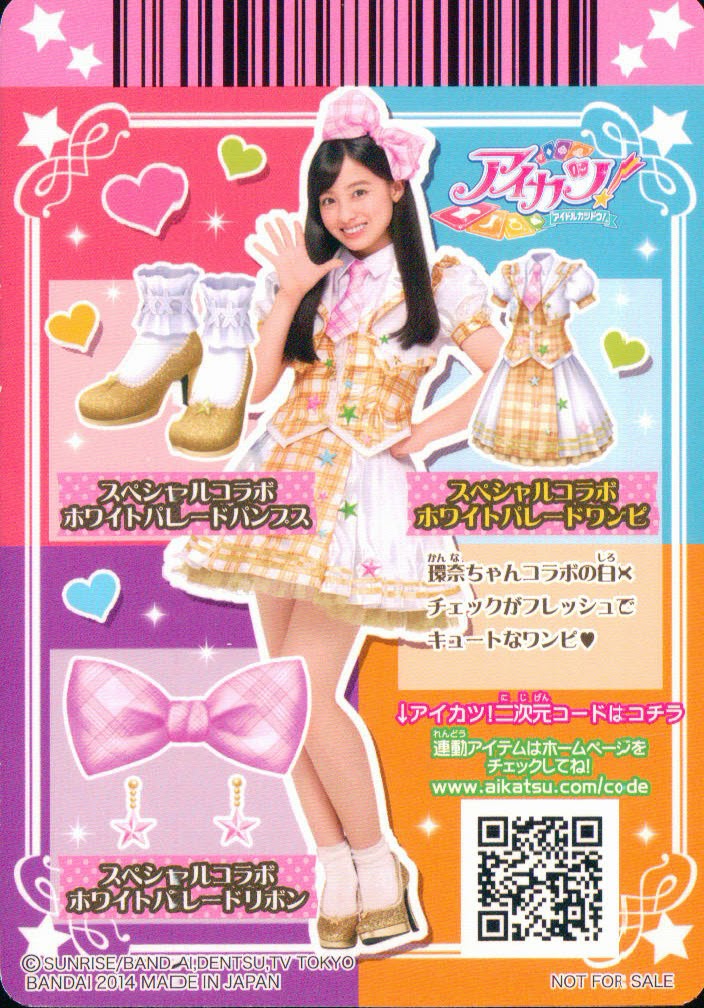 Some outfits include the top and bottom, as Kanna's does here. The backs of the outfit cards show the complete outfit, along with all the pieces that put it together. You can see here the dress from the front, the accessories package card, and the shoes. 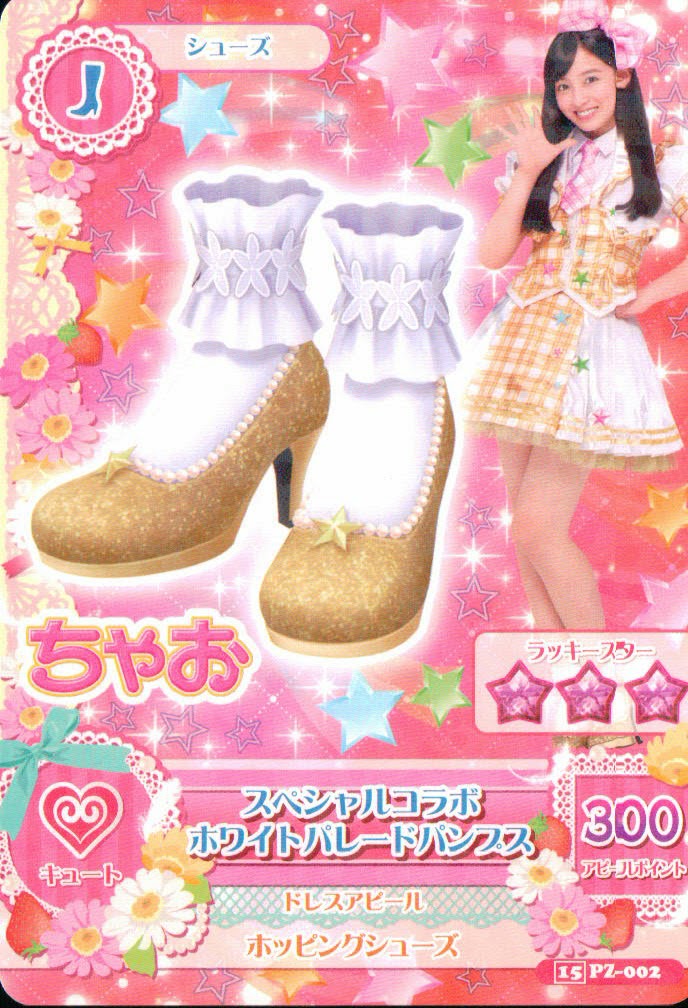 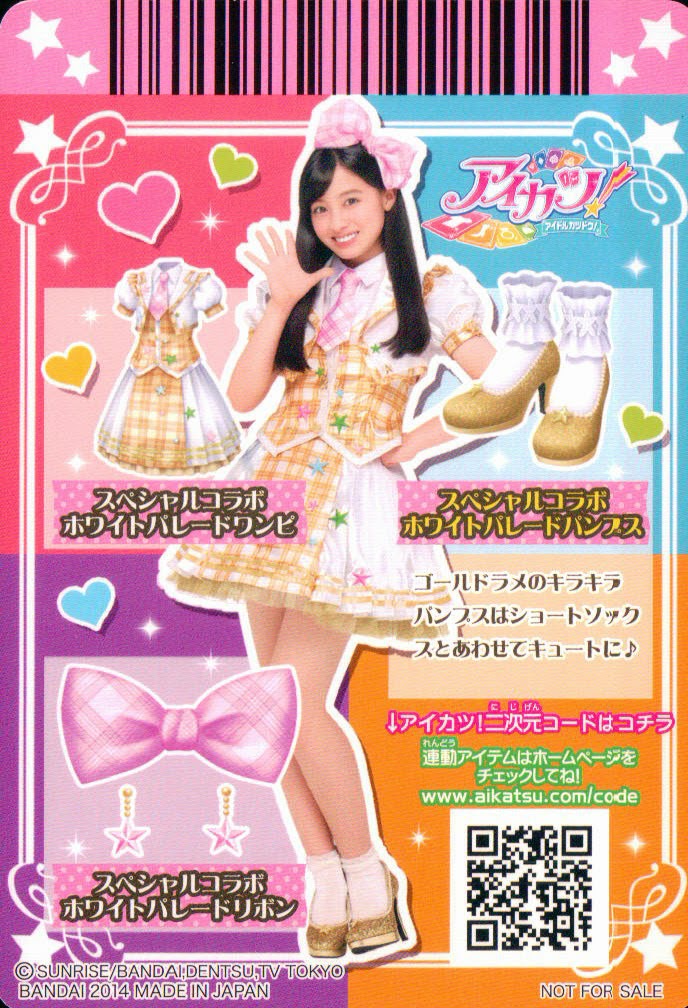 And here are the shoes. Notice that the backs change based on which part of the outfit you have.

The other Kanna promo is a tiara card, which has a full outfit to go with it that I haven't seen yet.
If you're wondering, Kanna Hashimoto jumped to major national fame last year as a member of a Kyushu-based idol group, and was labeled as a once-in-a-thousand-years idol. She has since made plenty of appearances as a spokeswoman, including a few Softbank cell phone commercials.

And I think that's enough cuteness for the week. But if there's any more interest, there will be more in the future.
at 7:12 AM 4 comments:

The Golden Golds are an independent team in Ibaraki Prefecture, not too far north from Tokyo. Their first season was 2005, and after the 2009 season a card set was released to celebrate their fifth anniversary, though they celebrated playing five seasons instead of playing for five years.

The set starts with the manager and coaches, followed by the catchers and infielders, and then the outfielders, as has become the standard with Japanese card team sets.

The players' names may or may not be in English. And as you see with #14 below, some players have special notations under their name.

Take a look at player 18 above. He is sponsored by cell phone/service provider au, which is featured prominently on his jersey and even ends up on his card.

Note the color change - different positions have different colors. And the #27 catcher is sponsored by Coca Cola (コカ・コーラ). 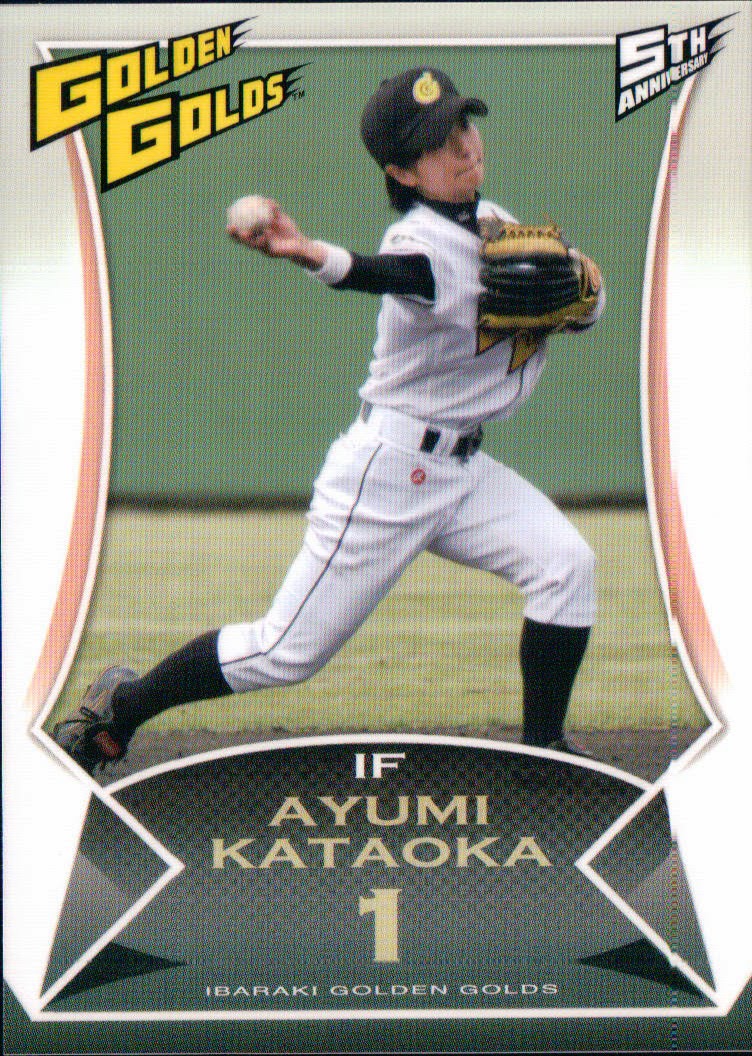 The biggest draw of the Golden Golds, and probably the card set, is Ayumi Kataoka, a woman ballplayer who joined the team as a 19 year old at its inception. She has also been the team's manager since 2011. Kataoka has her own card set, and apparently instead of being jersey number "one" it is read as "はじめて" (hajimete, "the first time").

Each box set comes with the complete base set of 32 cards plus two special cards.

All cards have a signature parallel, and I'm sure each box contained at least one of these. Nine players are in the "GG9" autographed insert set, limited to 50 cards each. Two jersey cards, with 120 copies, and a total of 200 signed "cheki" instant photos.
at 6:40 AM 2 comments:

On my other blog, one of the October snacks was a package with gum and some train cards. I thought I might share those cards here as well!

For about $1, you get, well, a square of gum and two train cards. There are 20 cards in the set, so with perfect collation it takes only $10 to build a set. 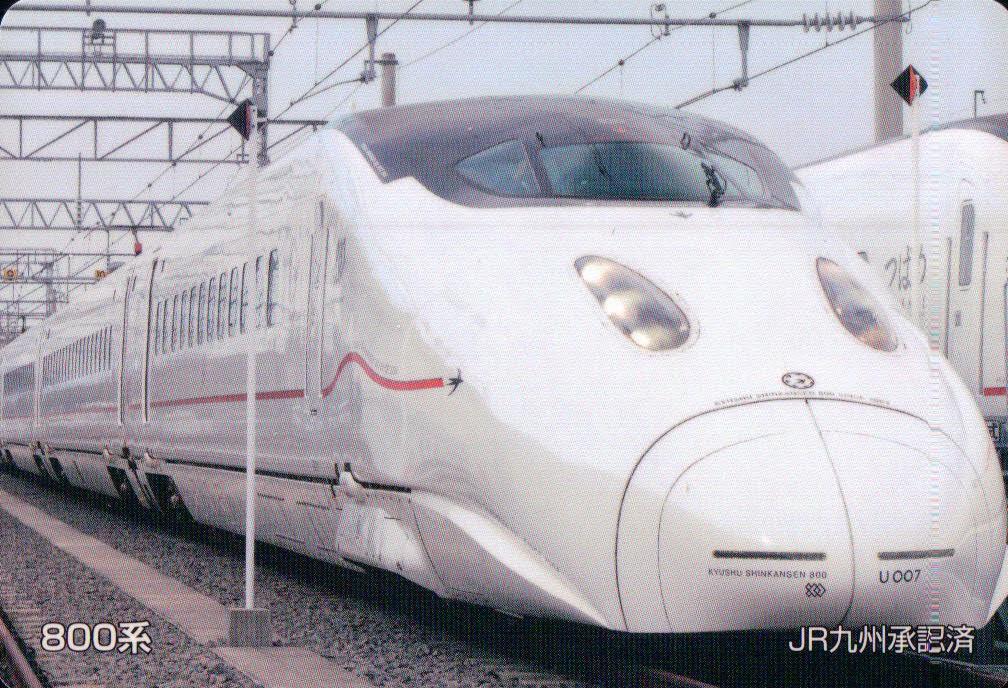 They aren't black and white, it just looks that way because the train has very little color. The photos are full-bleed, with the train model and operator at the bottom (800 series, JR Kyushu). 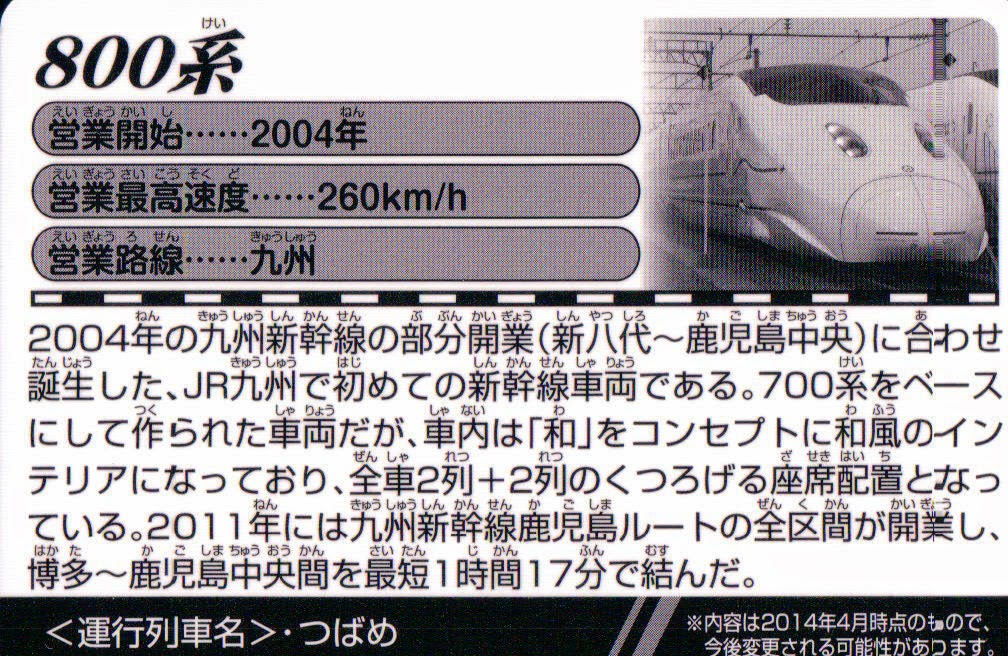 The backs are black and white, with lots of details on the train. 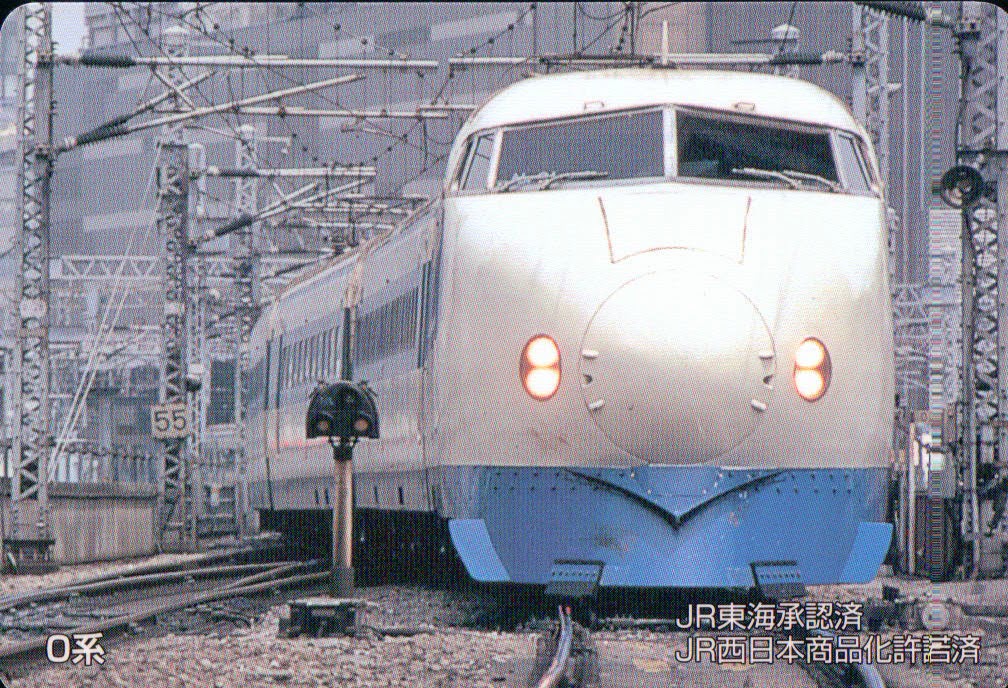 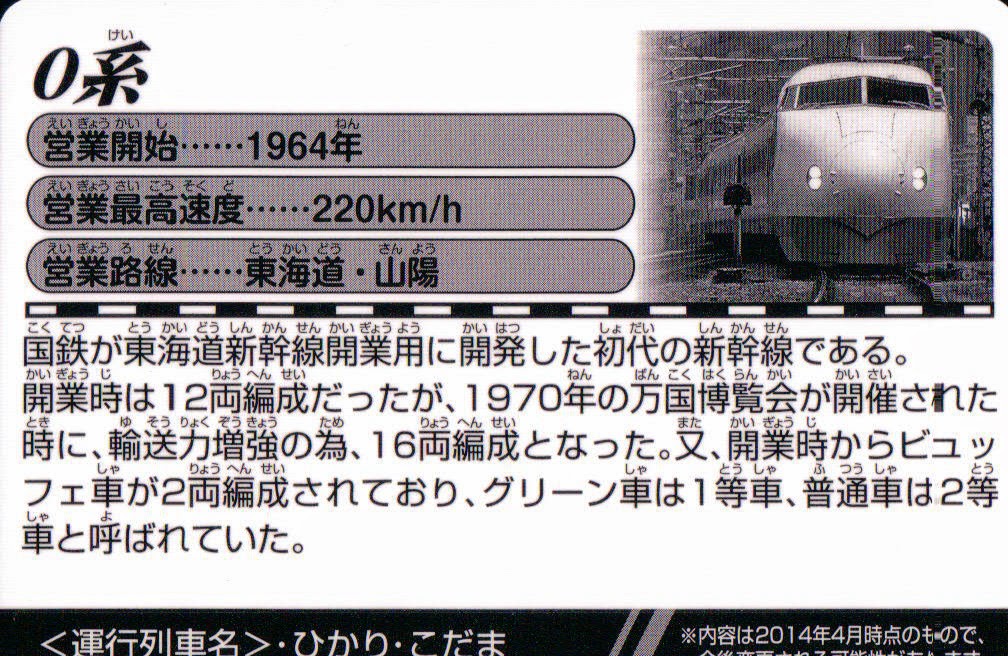 There are several other train sets out there, and if there's any interest I'll hunt some cards down. Just leave a comment below!
at 3:00 AM 3 comments:

The third series of Calbee chips have been on shelves for a couple months now, and I bought just a single bag for myself. Where I built (um, am still building) Series 1 mostly from bags, the second and third series were picked up relatively inexpensively from Yahoo Auctions.

Of course, there's a bit of fun in opening packs yourself, which for Calbee means getting a bag of chips. What were my two cards? 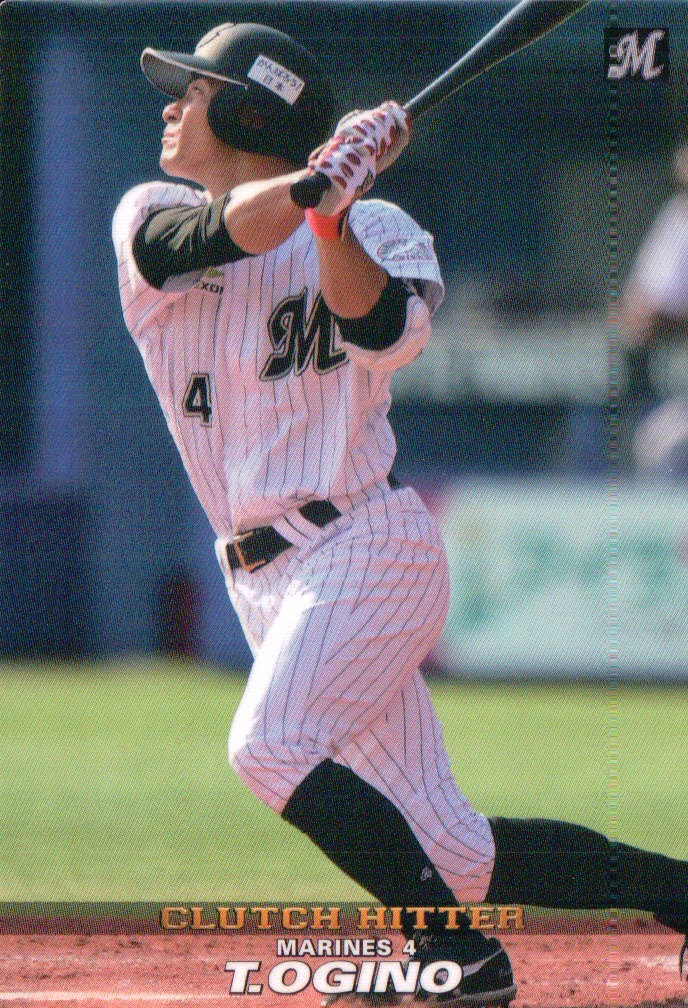 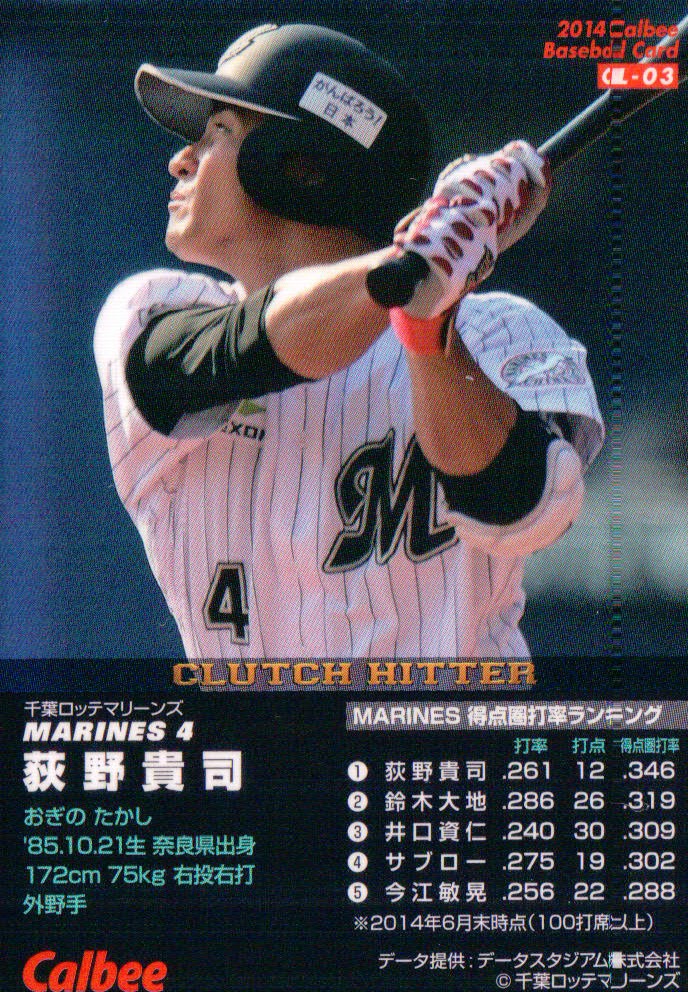 First is a Clutch Hitter card. This is the new-for-Series 3 insert that is probably not really any more rare than the base cards. But I need it for my type collection, so right off the bat this pack is worth the price of the chips! 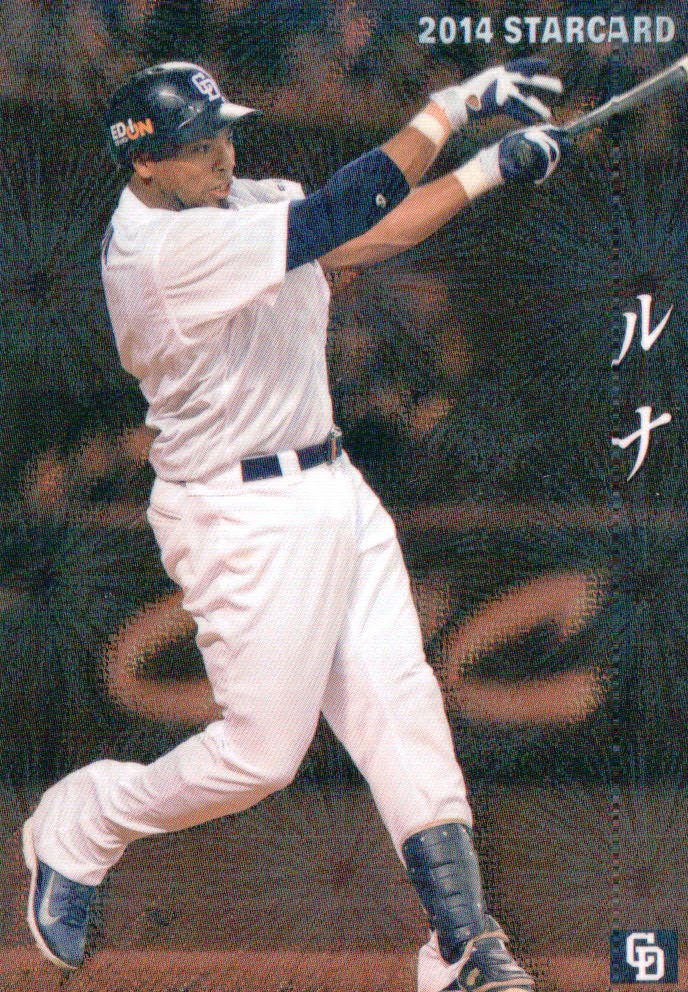 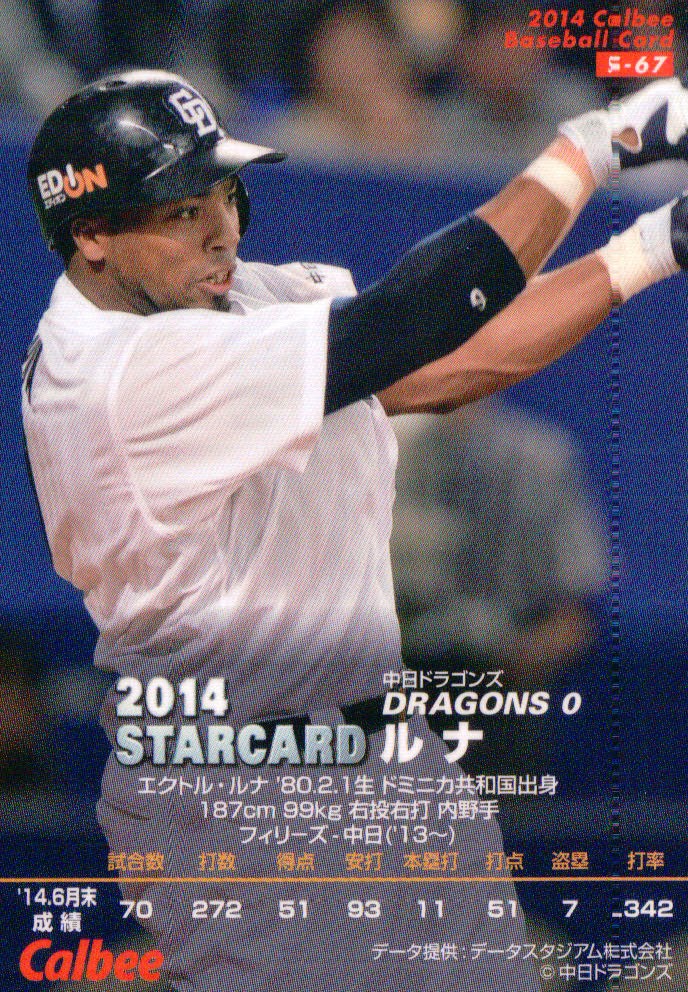 The second card is a Starcard insert. My set from Yahoo Auctions included the Starcard insert set, so I don't need it. Hector Luna has been doing pretty good in Japan - he batted .350 in 2013 and finished 2014 with a .317 average. Star Cards are the only "premium" insert in Calbee chips these days, and there's a gold foil signature parallel as well. I still need a bunch of them for my set, which I hope to complete by the end of the year.