I’ve read a lot about food issues coming from the US this year. I’m sure everyone who follows US baseball card blogs knows about the WalMart pizza cards. Well, Japan has its own new food issue this year too.

Actually, including cards, stickers, or other goodies with candy or food has been going on for decades here. Bikkuriman stickers continue to be popular, and there have been some baseball versions in the past. Kanebo Gum included MLB cards in 2002 and 2003, and walking down the candy aisle in the supermarket shows a lot of products usually packaged with a piece of gum.

Of course, Japan has had Calbee Baseball Chips every year since 1973.

But new on the scene this year is an odd-sized oddball set issued by Nippon Ham. It’s smaller than a regular card, similar to Calbee size, and manufactured by BBM. 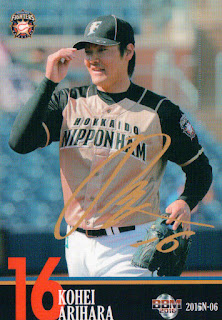 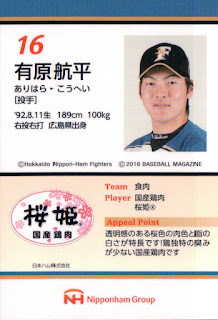 As you can see the card design is fairly simple. There is a gold facsimile signature on the front, though it isn’t in foil. Note that the card number is found on the front of this set; the number on the back is the player’s jersey number.

Nippon Ham is a food producer which focuses on meat and dinner products. They have ready-to-bake pizzas in supermarkets all over the country.

Right now I’m not sure about any details for the set. But hopefully I’ll be able to find out more in the future. I picked this card up through Yahoo! Japan Auctions.
at 3:00 AM 7 comments:

Should Pete Rose be in the Hall of Fame?

Everybody always talks about this each time the Hall of Fame voting begins. What Rose did as a player is amazing, though his gambling as a manager did him in.

While time heals all wounds, and people would like to forgive him for what he did, the Hall of Fame and MLB still mark him ineligible.

The Reds inducted him into their Hall of Fame this year and Rose is a member of the All-Century Team, showing that perhaps things will change. 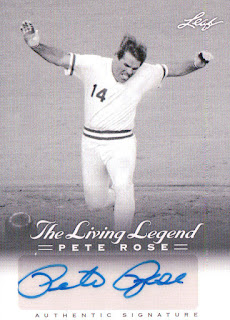 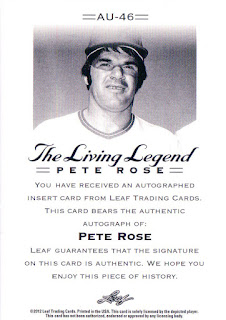 It’s not hard to find Pete Rose autographs, as he signs anytime, anywhere. But his signature has eluded me until I picked up the Leaf card you see above. I’m pretty happy to finally have one in my collection, and I might go ahead and try to put together a small player collection of him.
at 3:00 AM 1 comment:

My player collections come in three flavors. I have regular collections with just the base Topps card from each year for that player; most of my PCs are in that bracket. There are some super collections - Charlie Hough, Geoff Geary, and Buck Farmer are up there. And then there’s Jose Altuve, who falls in the middle.

I get pretty much any Altuve card I can, though parallels, autographs, and relics stay off my want lists. I did pick up an autographed bat card and a jersey card so I could have a “trifecta” but those cards are in the US so I can’t show them here.

I did, however, pick up a couple new regular cards of his: 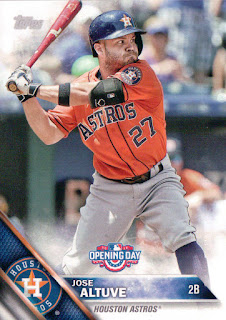 I busted a few packs of Opening Day this year, as usual. It’s cheap and helps me scratch that itch. I didn’t get Altuve, but I was able to trade for it. 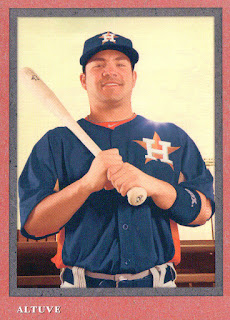 And this 2014 Topps Turkey Red card popped up somewhere so I grabbed it too.

With the exception of 2016 cards, my Player Collections are pretty well-managed. There are 18 Altuve cards I’m looking for, which can be found in my want list link. Most of them I just haven’t pulled the trigger on because I’m focusing on other parts of my collection.

(Sorry, the formatting on my posts seems to be completely screwed up. So words are randomly splitting. I'll try to fix that next time.)
at 3:00 AM 1 comment:

The 2016 Olympics are still months away, but Japanese people are already excited about the 2020 Games in Tokyo. And Japan has a strong sense of national pride. So it’s no wonder that I spend a decent amount of time talking about the sports Japan excels in during international competition.

Rugby comes up often now, thanks to the Japan team’s recent success. And of course soccer, judo, and swimming come up frequently. Volleyball remains popular, and earlier this month I even talked about some of the boating events with a student.

Japan has a strong men’s gymnastics team, but I’m always happy to talk about gymnastics because America’s ladies have been the best for as long as I can remember.

Carly Patterson was a part of the 2004 silver medal-winning team, and won the individual all-around competition that year. I have a collection of gymnastics autographs now, and she is the newest addition to that collection. 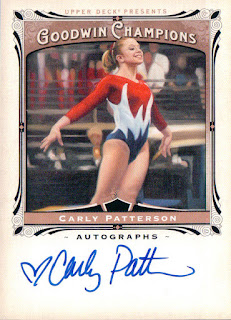 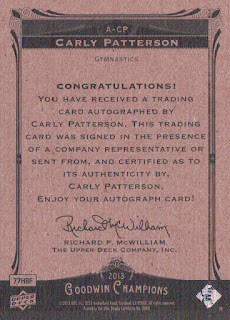 I really like Goodwin Champions - it’s the one Upper Deck set I collect each year. In fact, I find that Goodwin has a more appealing selection of subjects than Allen & Ginter some years!
at 3:00 AM 1 comment:

I'll Buy That for a Dollar!

Talk about lucky: I got this card for just one dollar. The line across the top is a scanner artifact, not damage on the card. 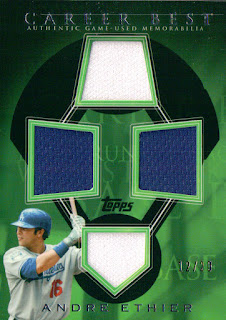 It’s not too hard to keep up with recent Calbee releases, though the gold signature parallels are always pricey. But hunting for older Calbees I still need in my type collection is getting harder and harder.

I recently made two important and exciting pickups for my type collection. 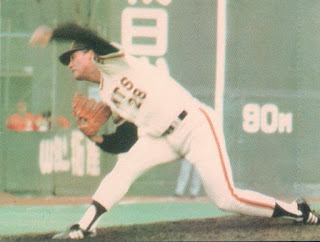 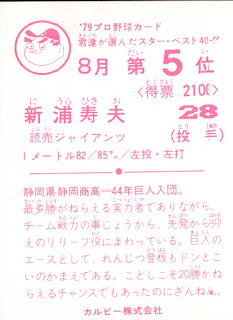 The first is this August Best card from the 1979 set. The player is 新浦寿夫 (Hisao Niura) of the Carp. Gary Engel’s guide doesn’t indicate any rarity for this set, but finding a card has been difficult, and I finally came across one at Mint Ikebukuro. They identify this as a rare series, and the card came at a premium price. But given that I never see them at shows, I bit the bullet and dropped 4000 yen on the card. 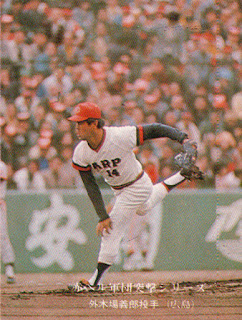 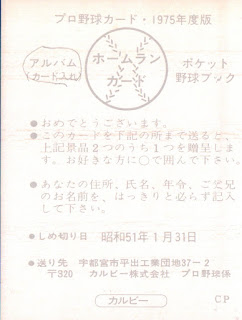 The second card was much cheaper - a 1975 Homerun card that I got for only 1000 yen! My guess is that there are at most a dozen of any one Homerun card out there, and probably much fewer. They were mailed in to Calbee to redeem for a prize, so after being written on and later stamped by the redemption center, I’m sure most got tossed in the trash. Add to that the fact that Homerun cards were rare to begin with and possibly issued for every card front in the set, and you have an actual scarcity that’s difficult to match.

This card is even more interesting in that someone has circled a prize, but there is no stamp from the manufacturer, indicating the card might have never been redeemed.
at 3:00 AM 6 comments:

I ain't dead yet!

I think my last post was back in January, because since then I’ve been living without standard internet. Me. A guy who spent hours a day browsing YouTube, searching eBay, and writing posts. I can’t say it’s been easy, though my old iPhone 4s still manages to handle the internet well enough to serve my needs.

Let’s bring you up to speed on my life.

In December, my grandmother passed away. A memorial service was held for her in February, and I went back home to attend. It’s not easy to say goodbye to one of the most important people in my life, and we were very close. But I feel better for doing so, and I was able to see family members I haven’t seen in decades.

My belongings which were stored at her house are now with my mother. Remember, I do not have a San Francisco address any more. I continue to grab things on eBay, and she sends me photos. So while I haven’t been posting, I have been collecting.

In Japan, I’ve made some great finds on Yahoo! Japan Auctions, and there have been a couple shows. Actually, I’ll be attending a show I’ve never heard of on the 29th. It seems that this is the 38th time this card show has been held, so it might be pretty big. We’ll see. And I’ve been getting to the card shops to pick up new singles.

On the career front, I am being promoted to Emergency Teacher. It’s like a substitute teacher, but requires a bit more skill than a regular teacher. I start that position next month, so I’m moving again. Luckily most of my stuff remained in boxes so packing hasn’t been too hard. I’ll be living in Funabashi now, about 20-30 minutes east of Tokyo, though this job involves lots of travel. I could teach in the Tokyo area, or I could be sent to Tohoku or Hokkaido. Or anywhere in Japan, really. It will be a challenge but at the same time I’m very excited to be moving up and meeting so many new people. Plus, I hope I can fit in a little sightseeing at times!

And some other big news: I will be on Japanese television!

Earlier this month, a TV show called “Rediscover Japan” interviewed me about my Japanese baseball card collection. The show is broadcast weekly on the Japanese TBS station, and my episode is supposed to air on June 7th. Note that this show is in Japanese, and I doubt it’ll be shown in America. But if you get Japanese TV channels and one of them is called TBS, you might find me! There is a bit of acting involved in the interview, so I hope they don’t make me look too geeky!

One of Japan’s biggest holiday seasons was this month - Golden Week was short this year as the holidays bookended a weekend so I didn’t take a long vacation. I went camping for the first time that I can remember, staying two nights on Sado Island. It’s one of those slower-pace-of-life places, and I really enjoyed being out in nature and hiking along the rugged coast at the northern end of the island! It’s certainly a place I hope to return to sometime.

So that’s about it. With about two weeks left until I move (there are two weeks where I’ll be living between my current and new apartment) I’ve been packing, trying to finish off the food in my pantry, and clearing out lots of stuff. Since I have no internet at home, I’ve pre-typed some posts and hopefully I can get the images to upload and line up properly and easily.
at 3:00 AM 7 comments: