As posted Saturday evening, I headed to DeAnza College to check out their monthly flea market. As far as flea markets go, this is hands down my favorite. The other two San Jose fleas are weekly, multi-day permanent fixtures, generally full of Chinese dealers peddling cheap new stuff, and Hispanic dealers peddling cheap old stuff, cheap stolen stuff, and cheap women's clothing. Not that there's anything wrong with that - occasionally something nice pops up in one of the Hispanic dealer's spreads (last month I found that Pinnacle Inside can pack at one of those blue tarps), and the Chinese dealers have every household good imaginable at low prices. But when I go to flea markets I'm generally hunting for cards and other cool stuff, and those can be fairly tough to find.
The DeAnza flea market is huge, held in the college's two uncovered side-by-side parking lots, with hundreds of dealers. There are a few Chinese dealers, and a few Hispanic dealers, but a large part of this flea market is what I love to look at - random people selling random stuff. 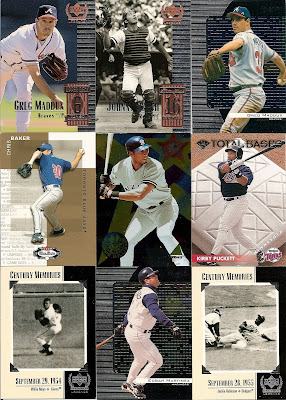 I kind of mixed up cards amongst the few people I bought from, but most of them came from one guy who was just looking to sell his stuff. He mentioned that he'd never brought his cards to the flea market before. He sold a Barry Bonds SGA bobblehead for only $3. I spent $10 with him, and $5 with his buddy who had side-by-side spaces. 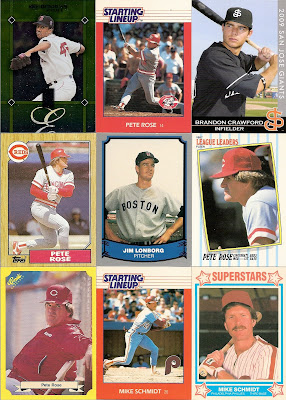 As always, I'm looking for multiple collections when thumbing through cards. The two of them had boxes sorted by team, some sorted by set and some set boxes (I think he said they were complete but I don't think they were). He had a little bit of newer stuff, but most of the cards (singles and sets) come from the junk wax era. I lucked out on the Elite insert. It's a 2001 I think, but they're always tough to come by, and I'd love a master run of the Elite Series inserts. That Brandon Crawford card cost me $3, but when mixed with the others it was a good deal all together. I don't know if he's supposed to be the next big thing for the Giants - he's batting .190 in 50 games this season - and I don't care that it's Brandon Crawford, really. It's headed to the Zoo. 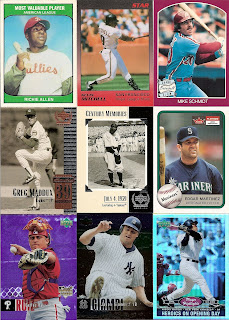 I didn't check my lists while browsing this seller, but I grabbed cards that I thought I would need for the Zoo or Awards/Leaders. 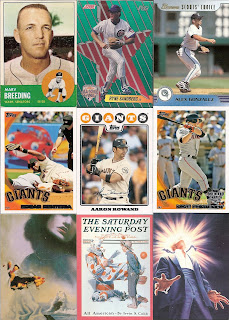 The top-right '63 card came from a woman who had some neat older stuff (non-baseball) in her space - motorcycle stuff, scuba stuff, random antique/vintage things. There was a stack of '63s, with most priced from $2-25 each. I couldn't find my list of years I still need Topps examples from, and I grabbed Breeding for a buck. Turns out I need '61, not '63. I really need to make a note so I don't buy stuff like that again. The woman also had a good bit of junk wax, mostly football and other non-baseball. I spotted a "sealed" Yoohoo lot of 10 cards, and asked how much. "Ten dollars, there's like 25 or 30 cards there." I said I was expecting around a dollar, and that there were only 10 cards in there. "Well, five dollars, that's only 50 cents a card." Thanks, but no thanks. I wouldn't offer only 50 cents a card on 10 '63s, but I'm sure as hell not paying 50 cents a card for 1993 oddballs. Things like this just remind me how tainted our hobby is in people's eye - everyone outside the hobby thinks that if they have a baseball card, from any time, that it must be worth at least a dollar, and if it's someone they've heard of, it must be worth $10 or more. ANYWAY! The Ryne Sandberg is part of the full P&G set which I already have. I think it cost me a quarter, and I might use it as part of a giveaway. The three middle-row Giants are all team set issues, so they're headed for the Zoo. I overpaid ($1 each, I think), but I never see broken team sets so I grab them when I can. Better at $1 than $7 or more if I have to buy the whole set. 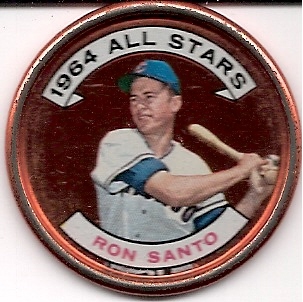 This coin was mixed in with a few others from this and the early-70s issue, and several little pins and buttons. Santo was the best choice in the lot of '64s, and is headed to the Zoo.

I picked up several Starting Lineups at great prices. Sandberg was only two dollars. 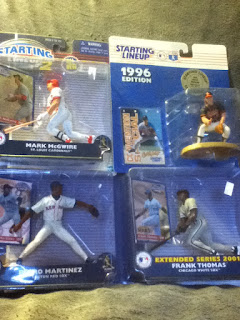 One of these things is not like the other, la la la la la la.... I don't know if I ever saw the Starting Lineup "2" figures, which were an improved version of SLUs. The details and quality were improved as a response to the MacFarlane figures. MacFarlane still won the war. Each figure was only $2. I originally planned on using the Big Hurt in my player collection, but I notice it's the extended series so it'll head to the Zoo. I'm glad I grabbed it! 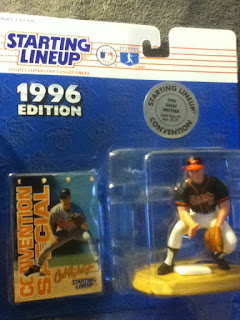 There's something special about the Ripken SLU. It seems there was a Starting Lineup convention in 1996, held right here in the Bay Area in September. This is a special issue for that convention, sporting that silver sticker, special card, and the back has no barcode. 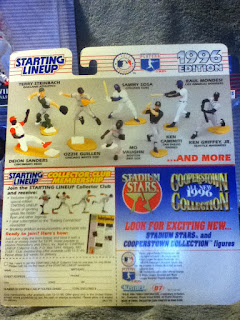 I was never aware until now that there was an SLU Convention at some point, let alone that there were special exclusive figures made for them. I paid $5 and it was worth every penny. 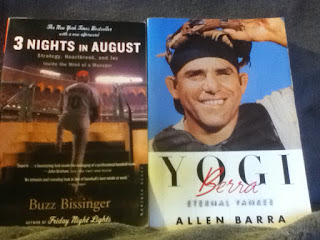 One of the best values was this pair of books, which I bought for $1 each. They're lightly used, or I should say they have some cover wear. I almost picked up a few others that would have been $2-3 each, but it was hot, I was tired, and I wasn't sure I wanted too many more books. I really should start reading them.

I picked up one last thing at the flea market, this box: 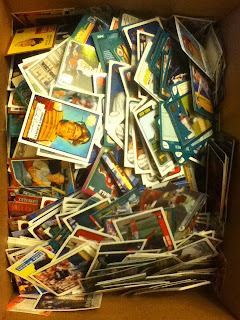 I asked what you thought I paid for it. The answer: $5. There's about 1000 cards in there, most of them in mint/near mint condition. There are some lightly dinged corners and a couple damaged cards, but they survived quite well. I'll bring you the results in a several part series (I'm going to milk this for all it's worth), but I'll just tease a bit more by telling you what you may already know by looking at it. Most of the cards are from 2001, and there was a large stack of football cards. I even found some really cool non-sport. Almost all the cards are base cards, but there were a few inserts in there, including some low serial numbered parallels.

Stay tuned over the next week or so and you'll see what I found. Here's a hint: I didn't see any Pujols RCs. (But how cool would that have been?) If this was an eBay listing, I would have used the title "2001 BOWMAN CHROME BASEBALL FOOTBALL LOT RC #ED INSERTS no PUJOLS" because that's how all the lame sellers do things.
at 4:40 PM