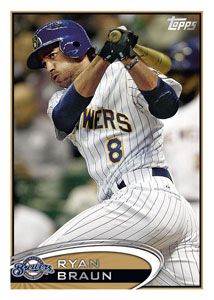 I can't help but feel like I've seen it somewhere before. So I started looking through card images over the past several years. I thought it could be an Ultra design. This is the closest I can find: 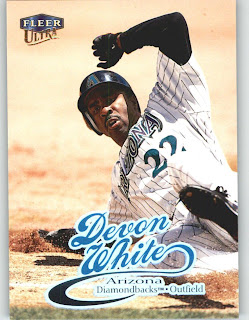 I thought maybe it was a Donruss design. Maybe 2003? 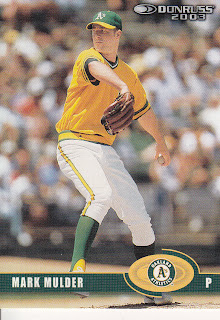 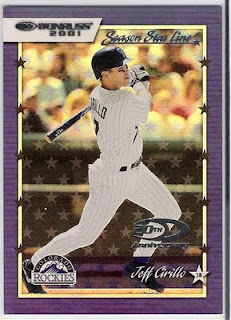 Maybe it's the 20th Anniversary logo in the corner on the 2001 set.
Fleer? No. Upper Deck? No.
Where have I seen a similar design before? It's killing me. Chime in if you know.
Anyway, back to this.

Is it a game changer? Not if you're going by design, but the only thing Topps could have done (right) to "change the game" for the base set design is lose the foil (looks like there's plenty of room for foil on this card) and go full-bleed (that isn't happening). I guess we'll have to wait for sell sheets and checklists to see what's really changing.
I like the design, though: simple, attractive, and fairly unobtrusive. It doesn't fill the entire bottom of the card, which makes it look even smaller and more appealing. It's a modern, slick design that I'll enjoy collecting.
Thoughts? Please, leave them below!
Update:

Preview images of the inserts and details have been released via Beckett.com. The Diamond Giveaway will return as a gold giveaway, and instead of diamond-embedded cards it looks like we get gold-embedded cards.

There'll be die-cuts, premium die-cuts and coins (just like the rings), plus autographed cards and 1/1 gold-embedded cards. (This doesn't seem to change the game much from this year's offering.)

Inserts will include 1987 Topps minis (do we really need this?) and Generations (will this be the new version of Diamond Duos?). There are plenty of autographed and relic parallels of these sets and a few other themes.

Parallels of the base set: gold parallels (this time in the canary diamond format), platinum 1/1 and wood 1/1, blacks, plates, and silk.

What am I interested in so far? Based on the preview images, the Golden Moments set might be interesting. I'm sure Topps has some more tricks up their sleeve. Again, it still isn't a "game changer" in my mind (cards made of gold are supposed to be the gimmick of the year?). If the unannounced/not shown inserts don't stand out, I may have to wait for the factory set on this one.
at 4:15 PM