Inspired by a link on another blog (I forget which, now), I participated in Just Collect Cards' big vintage clearance-style auction. All their auctions that week started at 99 cents, and shipping was $1 for the first card, and a maximum of $5.
I went for the $5 shipping deal. I was mainly interested in some oddball old sets - a couple Topps Stamps sets, my first World War II-era card, etc - plus some vintage Topps cards. At some point, I noticed a whole bunch of Sweet Caporal actress cards (N245), as well as a couple other tobacco cards. 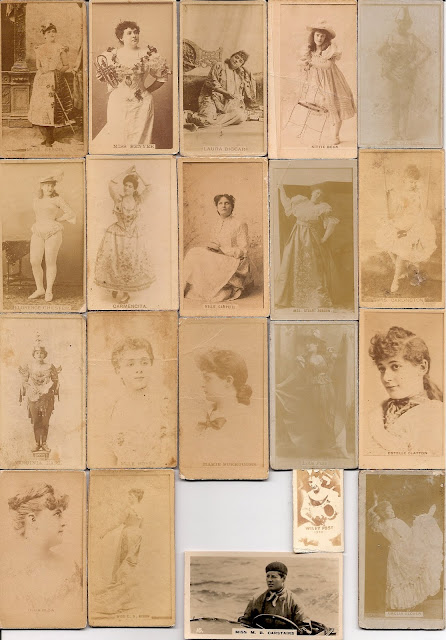 I bid on every one at $1 each, and won most of them. They're not in perfect condition, but who cares? There are two oddballs in the scan above. Miss M.B. Carstairs is a member of a motor boating team; the card is a Lambert & Butler 1926 Who's Who In Sport. You might notice the truly-tiny card sitting above it. I'll feature it later in the Cardboard Zoo, but for now, just know it comes from the first Topps set to feature baseball players. An amazing grab for me! Back to the N245 cards: I'll be attempting to put together the set eventually (48 cards, according to my sources). More on this in the next month or so. 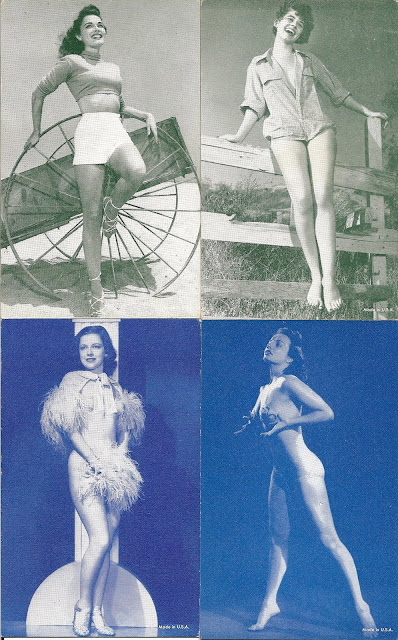 Speaking of amazing grabs, what on earth is that fine young lady doing in the bottom-right card? I love vintage glamour shots, and these Exhibits are fantastic additions to my non-sport collection. 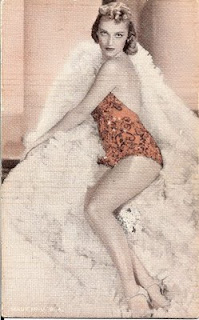 Here's another Exhibits card that didn't fit on the scanner. The coloring on this gives it the feel that someone might have hand-painted her suit after printing. 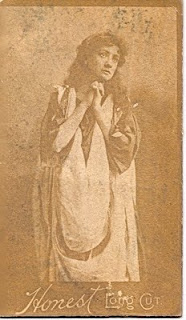 One more non-sport, this Honest Long Cut card of some unknown actress. I'll have to do more research on the set. [Update: This is an N150, from a very large set of similar subjects.]
Now how about some baseball? I picked up some rare vintage cards from Just Collect, but those are being shown on Cardboard Zoo over the next week or so. The following cards came from homeplatecards, mainly in a series of lots. 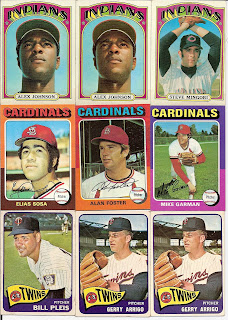 Other than the rare sets, msot of the vintage was packaged in lots by year and team. There were duplicates, but I'm not complaining - I'm using most of the cards for projects instead of set-building. I'm keeping the "extras" for eventual set building, though! 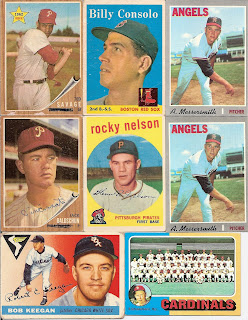 The 1962 cards show that the players were traded at some point, and the card owner kept track. 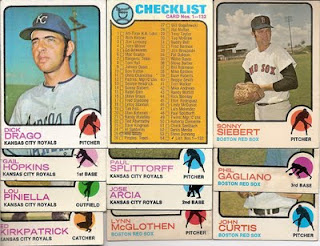 Between two lots, I also picked up these 1973 cards. The checklist has a couple marks, but otherwise these are in great condition. I didn't realize Sweet Lou was in the lot until I looked at the cards.

Just Collect has some auctions ending very soon, but their offerings are all full price. I'll be keeping my eye on their listings for more vintage deals, though. The cards were well-packed and the oddball baseball cards were in semi-rigid sleeves with identification labels (not sure if that's how they always do things).

Homeplatecards has no auctions right now.
at 5:28 PM