I enjoy participating in group breaks, although most older-product breaks only provide a few cards that are beneficial to my collections. It's the current-product breaks that can be most helpful, since, well, I don't have any cards yet from the sets! I jumped in on the Giants in Community Gum's case break of 2011 Lineage and I'm pretty happy with my results. I didn't do as well as Colbey, who pulled something like 50 hits of the Braves, but I am happy with my results. 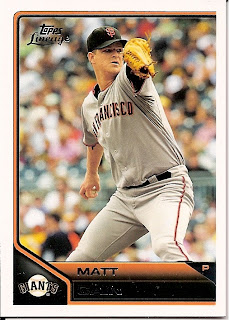 The base cards remind me of Topps Total. That's not a bad thing on its own, but given the heritage-like aspect of the set, it would have been neat to have used prior set layouts in the base cards. Perhaps they could have used other insert sets, unused designs, other test issues, or just recycled other Topps designs over the years. How cool would it be to have maybe 20 cards each of ten different rejected designs - one or two from each decade. The card backs are a bit of a let-down, too, almost an after-thought. 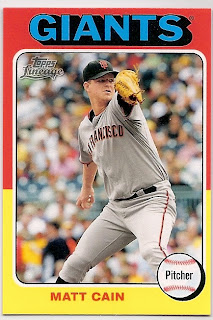 The 1975 Topps design has always been interesting, so the '75 mini parallel is nice to look at. I don't have the budget to try to put this together. 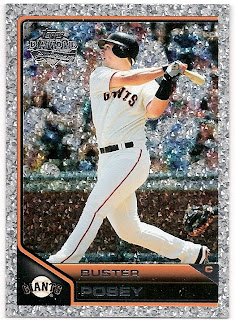 There is a diamond anniversary parallel, which makes the base design stand out a bit better. If I was to put together a diamond parallel, this would be it, since it's much easier than all 990 cards in the flagship Topps issue. 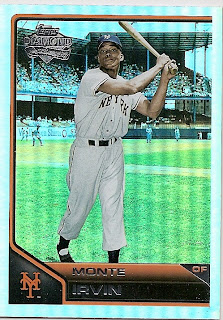 The refractors are enjoyable. Can anyone name the stadium behind Monte? Is that Brooklyn? He's wearing an away jersey. 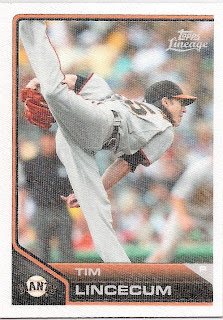 The cloth stickers are fun, because they're made of cloth, and you can stick them on things! I wish they had used the original cloth sticker design, though. 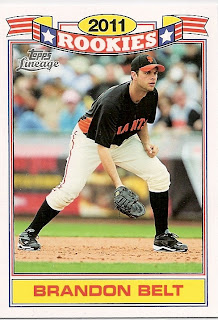 I think Topps missed the boat when they made a Rookies set in honor of the '80s cards, but didn't make an All Stars set to go along with it. I've always liked these cards, but I've never been interested in rookies. If there was an All-Star version, I would have probably tried to put it together. 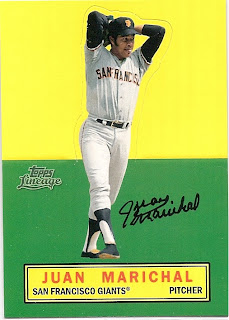 Stand-Ups! I have an original stand-up that stands up, so I don't need to de-mint this guy. Again, another fun set. I'd like to see this carried over to Opening Day as a yearly insert. The more kids can do with the cards the better - Spot The Error, stickers, stand-ups, 3D: all those concepts can entice kids to buy more packs at the store. Speaking of 3D... 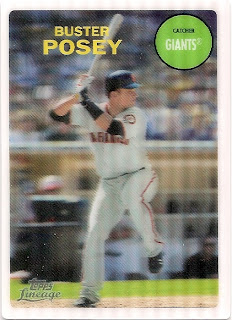 There's Mr. Broke-Foot. Three dimensional cards are awesome! Everyone else must agree, because they're selling like crazy on eBay. I'll wait awhile and try to pick up a set later on. 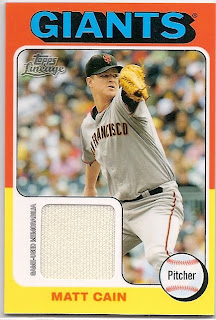 I managed two Giants hits in the case. I would have loved a Lincecum or Posey hit, but one of the jerseys will do for the Cardboard Zoo. 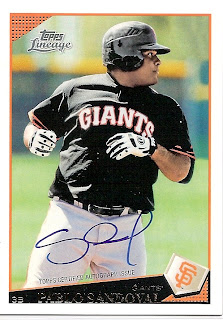 I also received one of the on-card autographs! I'm glad this is the set my autographs came from instead of the sticker '52 cards, only because I've won a few of those on eBay. Mr. Sandoval is certainly the team's best defensive player right now, and until this pull I still needed him for my 2010 World Series Champions team autograph set. So I still need a rookie reprint autograph for my type collection, but I'm okay with that! 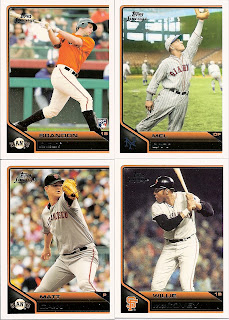 Now on to the extras. I put together seven complete team sets (11 cards), which I intend on keeping complete. I'll trade them each complete for a jersey or autograph, or a few inserts or oddballs I need for my type collection (or make another offer, of course). Being that I'm in the SF Bay Area, I will probably take them with me to the LCS and upcoming show to see if I can trade for some scrub hits. Cheap Card Collecting, or anybody else, if you're interested in one full team set, let me know!

I had some extras beyond the seven complete sets. If you need any of the following cards, let me know (please post a comment):

I also have some extra inserts, since I'm not putting any of the sets together:

I didn't pull a Venezuelan or a box-topper, but I have a box topper on the way. I'll have some other odd-and-ends inserts from this release for trade later, hopefully by the end of the week!