I realized this set is three years old. There hasn't been a sequel, probably because the first series still hasn't sold out.
I was on a mission to find some Opening Day packs at Toys R Us last week, hoping to get my hands on one of the Geoffrey the Giraffe cards. I was unsuccessful at two locations, but I wasn't ready to drive all over the Bay Area for a card I can get off eBay for $4, and I'm sure elsewhere for less. I didn't want to walk away empty-handed, and amongst all the old (still full-price) blasters of Goudey, Icons, and other Upper Deck products, there were about ten blasters of PopCardz.
Each blaster contains five packs of five cards, with one of the cards a guaranteed memorabilia card, plus on average one or two gold parallels. For $8, it's not a bad deal. I'm still paying 32 cents per card, though. At normal retail ($15), that's way too much for such a simple release. They should have had more cards in the set and more cards per pack for the same price. Maybe that's where they went wrong.
I still need cards 10 (Michelle Rodriguez), 11 (Chris Evans), 25 (Elisha Cuthbert), and 34 (Raven Symone). The only relic I don't have in the set is Rosario Dawson (apparently short-printed). Yes, I've been trying half-heartedly to put this set together for years. 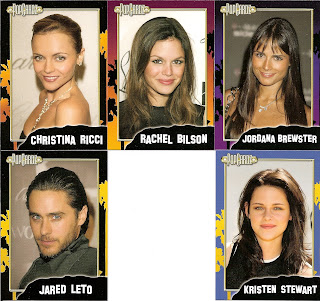 This was a "hot" pack, if you ask me. I used to have a thing for every one of the ladies here. Christina Ricci - since Casper (she's as old as I am, before you start coming up with nasty thoughts), Jordana Brewster since The Faculty, Rachel Bilson since she wore that sexy costume in that TV show she was in, Kristen Stewart... um, I've never seen any Twilight. She was in Zathura (okay movie if you liked Jumanji) and The Runaways (pretty good movie). 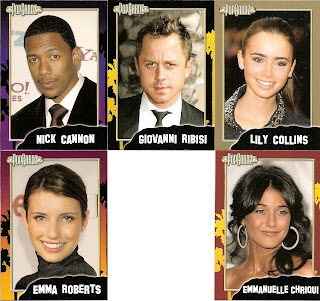 Here you can see a gold card - Lily Collins. Every time I see her name (she's in the relic set) I have to look up what she did to become famous. I still don't exactly know. Emma Roberts looks way too much like Julia Roberts (it's in the mouth). Emmanuelle Chriqui is one attractive woman. 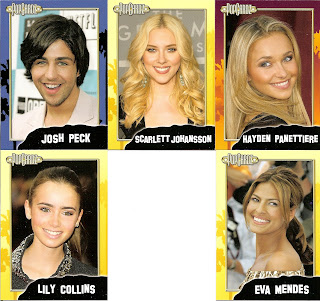 Wow, another pack with four females. That's my kind of pack. Who the heck is Josh Peck? I love Scarlett Johansson. Ever seen Ghost World? Great movie. I met Hayden Panettiere once. She's as adorable in person as she is in the movies. If you don't think she's adorable in the movies, she's not adorable in person. Save the cheerleader, save the world! (I didn't care much for Heroes.) I've never had much interest in Eva Mendes, mainly because I've never had much interest in any of the movies she's been in. 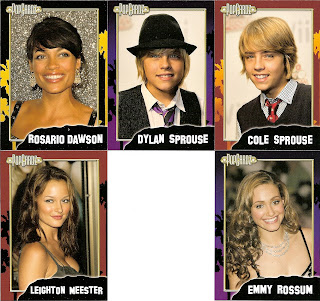 There's Rosario Dawson, but it isn't the relic card. Funny, Dylan and Cole Sprouse were side-by-side in packs. Who are they? And who's Leighton Meester? Emmy Rossum is adorable in every movie I see her. I guess that's her "thing." 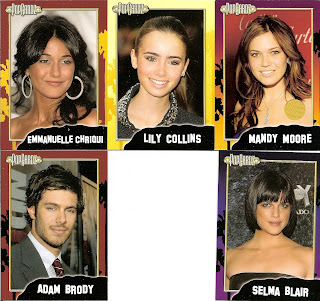 What the h-e-double-hockey-sticks? Two doubles in this pack from the same box! At least you can see the relic, in the final pack I opened. I get the impression Mandy Moore wants to be a bigger star than she really can be. She's beautiful, fun and talented, but not fantastic. I met her in person, held her hand, saw her live in concert, and have a couple souvenirs from those encounters. Souvenirs are awesome. I already have this relic, so if you've been dying to own a piece of yellow fabric worn by Mandy Moore, let me know and we can work out a trade.

In fact, all these cards are doubles, which kind of sucks since I only need four cards in a 40-card set, so if you want the whole lot for a couple relics I need or something really cool, let me know. You have about half the set here.

Final thoughts: The card designs look more 1998 than 2008, but for a pop culture-oriented set that's certainly acceptable. Collation sucks when two of the 23 base cards are extras. Collation sucks even more when I've opened a few of these and I still haven't seen four of the cards. The gold cards are dull. I like the base design better. The relics are all females (yay!) and while they are the same design as the base cards, it's nice to have access to some more celebrities who aren't in relic sets yet (or weren't back then). I would love to release my own set like this on a yearly basis, but include more information on the subjects' careers. But whatever - they're just the 2008 version of pinups.