I don't do football. You know that. But this guy did. There wasn't much football in the lot, and most of it came from one set that'll be shown in an upcoming post.

I sorted these into two stacks, expecting more Topps Heritage, I suppose. There were 15 from the 2001 issue, including two Brett Favre and a New Age Performers insert (both seen in the scan).

There was a small collection of inserts, too. I'm not going to list them, partly because I don't know anything about some of them. Yes, I realize that Terrence Wilkins isn't an insert but the Crown Royale sets always look good. 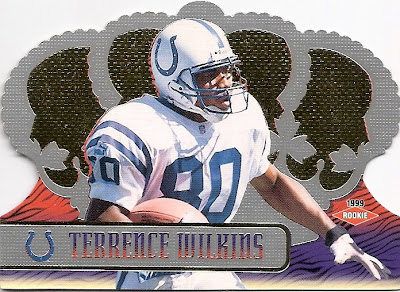 As I said, there's a big stack of football left to come. From the looks of things here, it feels like the guy went into the card shop or Target, bought a pack of each product he could find, and left it at that. Or maybe he bought one of those value repacks, but since most of the baseball cards come from 2001 I doubt that was the case. We'll never know!