In every box there is a bit of disappointment. This post looks at this box's "bad" stuff.

I say bad stuff, but there are some highlights here. There were about 100 junk wax era cards, scattered among several sets from 1990 through 1993. Chipper Jones and Mike Piazza "Star Rookies" from 1993 Upper Deck were included, but Chipper's rookie came in '91 UD, and both cards have black borders with chipping.

There were around seven 1992 Pinnacle cards, but three were Jeff Bagwell and three were Greg Maddux. The lot also included several of the 1992 Score Rising Star set. 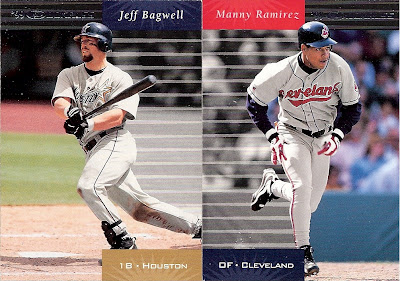 There were also a collection of early '90s inserts, nothing exciting. Well, I say that, but there were two cards that were really big back in the day.

Remember when the Upper Deck SP inserts were super-hot? The 1991 SP2 card with Nolan and Rickey together was a big pull, and in Atlanta the Deion Sanders SP3 would cost you a fortune. The SP series is one of my favorite "sets" and I still haven't completed it. There are three cards remaining in the original numbering, one of the 2009 SPs, and all three 2010 "R" cards.