We've all been there before. You sit down, write a post talking about what will happen in the future, and before the article posts, the future happens. Well, maybe that doesn't happen to you. It happens to me when I try to get ahead when I have way too much for one day's post. Namely, when lots of stuff comes at once when I have a massive amount of purchases or trades. Such was the case when my A&G eBay lot showed up on Thursday and I wrote yesterday's post that night. Friday, Chris's (Nachos Grande) trade package showed up. I asked him for a sampling from all the Ginter sets he could spare, and fourteen fabulous cards were in the bag. 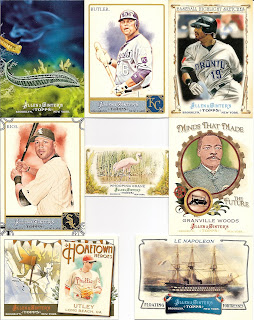 If you remember from yesterday's post, pretty much all the cards from the Ginter lot are for trade. These cards will take their place in the Cardboard Zoo. 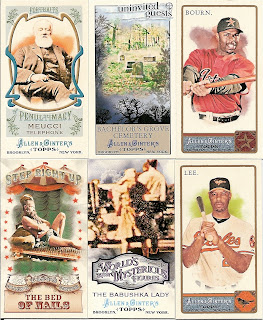 As of this writing, I haven't sent Chris's cards to him. I've been busy dealing with family stuff, namely, getting my grandma to the airport, which might as well have been me going on the trip myself, because I had to do the packing with her, and it's like pulling teeth (how's that for a run-on sentence). In fact, I received two more trade packages on Friday; you'll see those later this week. I need to mail those as well (I should have done that today).

Thanks again Chris for your help!
at 4:46 PM