Continuing my Topps rewind (see the first post here), here are the Topps sets of the '90s, in order from least to most favorite design. This is quite the scientific post, by the way, as I sampled hundreds of brain cells in my body to determine these results. I would have sampled thousands or millions, but I'm not sure I have that many left. 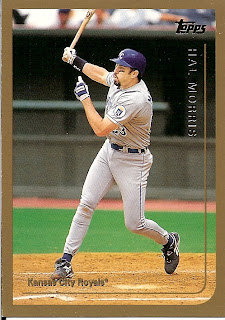 1999 Topps. This set was issued early in a period when Topps was fascinated with gold bordered cards. It also has the least design effort to any set in the '90s. Had Topps used this basic design with full-bleed photos, I probably would have ranked it much higher, but the simple curved-corner line put with a strong border makes the design feel unfinished. The gold team name blends in with the brown dirt, while the foil player name disappears in the dugout. Not every card in the set will have these issues, but the tones just don't work well. 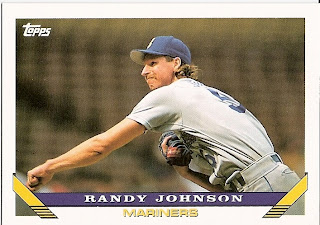 1993 Topps. For most flagship issues from any manufacturer, I may not love a design, but I never start out hating it. This set is an exception. The harsh, jagged fonts paired with a technology-inspired straight-line banner makes me feel like I'm looking at a 1980s computer screen, or worse - a 1980s American-made automobile. 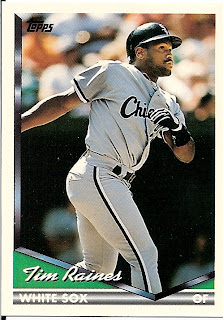 1994 Topps. Compared to the 1993 release, this set is beautiful. It still has straight lines, but the fading team colors breaks it up and makes it feel more friendly. It's difficult to read the white team name and position when one of the fade colors is white. The use of cursive player names is unique to the decade, but I can see where children could have a hard time reading it. I'm just wondering - other than signing names, is cursive really used? I spent forever learning how to make that chicken scratch readable, always being warned that I'll need it in high school and college, but all my hand-written papers were in print. 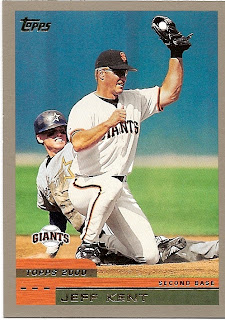 2000 Topps.With more gray than gold, the 2000 issue's border doesn't feel as intrusive as the 1999 card. Add to that a little bit more design aspects, and the set isn't ugly. The use of team colors in the bottom border is a nice touch, though it can be hard to read the gold foil (a problem with most foiled lettering). Bonus points for using the team logo. 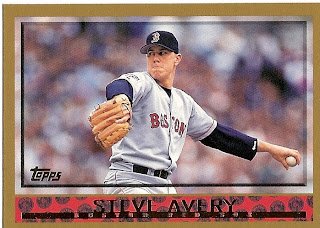 1998 Topps. Excessive borders make the photo feel smaller on this card, but the design is attractive. I like the picture frame style overlay, but I could do without the gold border. Again, dumping the border for a full-bleed photo would have made this a great design. I like the team logo tiled in team colors behind the player and team names. Again, gold foil can make that difficult to read. 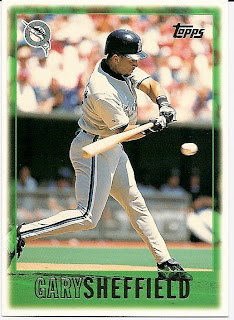 1997 Topps. This is one of the easiest-to-read foil lettered sets I've seen. The use of a team color shading helps the bold foil letters stand out, and the fade to white borders makes the card feel more like a full-bleed issue. The double border detracts a bit from the image size, but the design makes up for that. 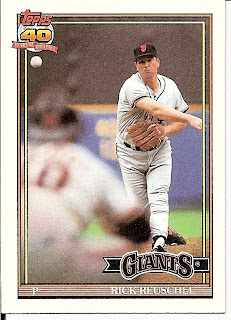 1991 Topps. This was the last flagship set issued by Topps on gray card stock. I'm not sure why I find this design as attractive as I do. The player's name and position are tiny and kind of tough to read. I think it has to do with the logo-style team names. Usually, if Topps includes team logos, they're the circular ones (see 1997 card above). The team color design doesn't intrude into the image space, and the 40 Years of Topps logo isn't huge but reminds you of the manufacturer's heritage. 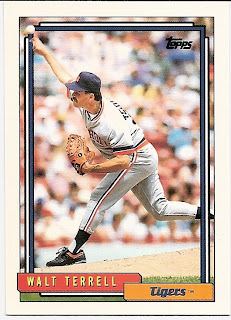 1992 Topps. Like the 1989 Topps issue, this set ranks high in my heart because it means something special to me. It was a step forward for Topps, as it's the first year they used white card stock, and the images felt crisper that year as a result. The design is similar to the prior year's set - team color lines around the photo, but this time the players occasionally jump out of frame (see the upper-left corner). The player's names are easy to read, even with the narrow font, and the team names are cursive-like without being cursive. Is there a name for that? 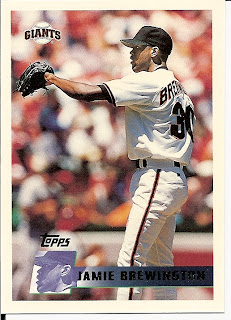 1996 Topps. This set looks great, as does the year before (see below), because the design is minimal and is photo-oriented. The player's name appears in a simple fading banner across the bottom, with the added touch of a monochromatic "close-up" attached. The design elements that do exist are sharp and stylish, and the player's name is simple enough to read. 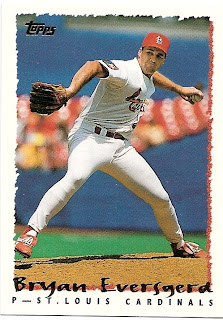 1995 Topps. There's a little more to this design than the 1996 set, and it's the touches they add that make it attractive in my mind. Oddly enough, the 1995 set is one of two I don't have. I like this set because of the painting-style border, with the team-color "shadow" effect. The font used for the player's name is unique and attractive, while not being too difficult to read. The feel of the set is that of an art studio, with the rough unfinished edges and handwritten names.

Some of you may not agree on my assessments. What do you think? Plenty of space below!
at 6:32 PM