Birds from the Quarry

Remember in the olden days of mining, you'd bring a canary into the cave with you. If the canary stopped singing and died, you knew the air was dangerous and would get out.
Well, orioles aren't the same as canaries. They don't care much for mining, tending to enjoy baseball fields much more.
I participated in the recent Cards from the Quarry break of a whole bunch of products. I grabbed three teams, and here's the first! 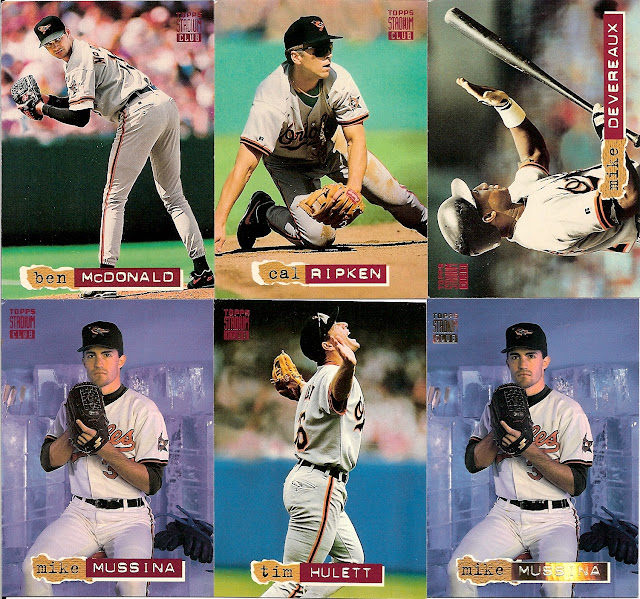 I'll start with some 1994 Stadium Club. There is a small collection of inserts attached to the set, of which I received none. I lucked into a Mike Mussina gold parallel, though! Stadium Club was known for its photography, including several posed shots. I don't know much about Mussina, but I assume the ice blocks represent something. Maybe his curves are so good they freeze the batters? 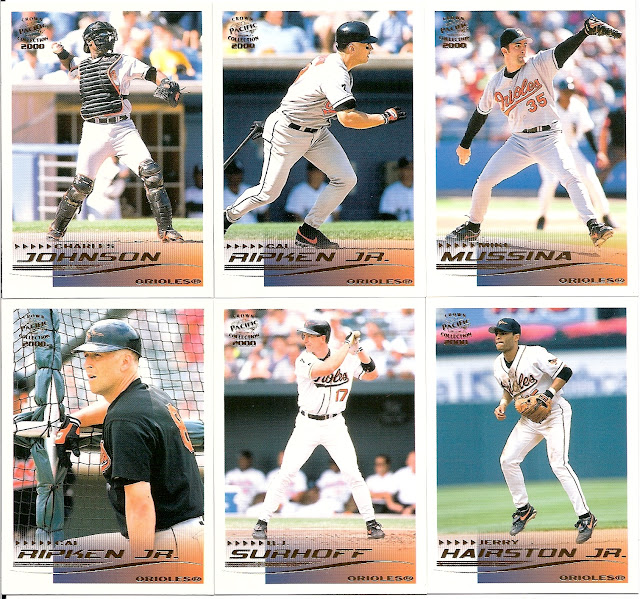 Next, some Pacific Crown Collection from 2000. The bottom-row Ripken is the team checklist. While most of the set contains action shots, the TCs appear to show the team captains or leaders (not sure how they were chosen) in a non-action shot.

Here, you see some Fleer Focus Jersey Edition from 2003. If you're not familiar with the set, the focus was on putting hits in the boxes, instead of quality set design. Nothing big for the O's on this one.

I somehow missed Dugout Axcess (yes, that's how it's spelled) when it was released in 1998, so I don't know anything about it. I guess it came out after I stopped collecting that year. The cards are thin - like index card thin - and in true SkyBox form the cards are design element-heavy. They aren't ugly, though, and the back design is on par with a quality Upper Deck flagship set. There are several subsets and inserts:

The Sketch and Trivia cards are subsets. I almost like the Sketch card, if only it was an actual sketch (it looks like a photo pushed through a graphic arts program). The Trivia card contains several more questions (and answers) on the back. Double Header, on the right, is an insert set that can be used as a game. Detailed instructions are on the back. The whole set looks great for kids. Cheap card stock with interactive, fun subsets and inserts. I'm guessing this was an inexpensive box even in 1998.

Not inexpensive was this 2007 SPx Rookie Edition set. No Orioles rookies here, but I like the design.

Upper Deck turned the Fleer line into an afterthought. The Flair Showcase line is attractive, but there isn't much to it. The Mora has a different background shine to it - it's more of a silver than black background like the others. But that doesn't make it a parallel - there were two parallels both numbered to 150.

I "won" the following cards, thanks to the randomizer - extra base cards and an insert from the Axcess set.

I'm not complaining! I love these nickname name plate cards, and Junior and Chipper are both in my PCs.

And there's another Griffey for my PC! For what has to be the cheapest product in the break, these cards are really nice.

Here are the rest of the cards - another Sketch, Trivia, and Double Header!

Well, I pulled one of each Ripken (except the TC from Crown Collection), plus the Griffeys and Chipper from the extras for my player collection - eight cards total. Plus, Charles Johnson's Crown Collection card fits into my Awards/Leaders collection. There are plenty of extras available for trade. Let me know if you're interested!