As I upload these two photos, I remind myself that I am quickly approaching the 1GB limit for Picasa. Have you had that problem? What have you done about it? I upload photos full-size, which means mega-megabytes. Perhaps there's a way to bulk-resize my photos through the Picasa app. Otherwise, it's $5/year for 20GB.
Now that the fun is over from attacking 2012 Topps, and Lineage is in the past, things are going to be fairly quiet in the card world. For the next month or two, the only releases to hit shelves will be expensive ones, like Chrome, Finest, and Marquee. While one of my collections dabbles in a bit of that stuff, most of my pickups will be from eBay and card shows. This is a perfect time to attack some of my other collections.
This week was an inspired one, full of here-and-there errands, odd jobs, and chores. My baseball card chore list is quite long. There more I can do with my cards, the better, right? The major task I attacked this week was the sorting and bindering of part of my Awards/Leaders collection. 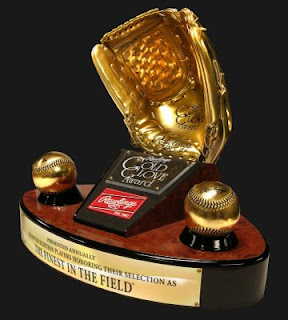 Two three-inch binders sit in storage in Georgia, half-full of pitchers who threw no-hitters, Cy Young and MVP winners, and season stolen base leaders. I can't do much with those on the other side of the country, but I added a few categories over the past year that aren't in the binder. One of those is the Gold Glove award. This was the first position-related award added to my collection. It has been given yearly since 1957; The 1957 award was given to one player from all of baseball at each position while subsequent years included one award per position for each league. There have been a couple ties, resulting in two players at a position for one league. Nine hundred sixty-five total trophies have been given to date, not including the all-time award given in 2007.

It's a fun project sorting cards into fifty years, especially when the cards themselves give no indication of the year! I found a technique that worked fairly well, and put the cards into a binder, one page per "team" or two pages per year. I knew there would be several empty spots, especially through the 1970s. It turns out that I need almost 350 cards, 70 of them for 1980 awards and later.

One of the joys of putting cards into a binder is seeing a complete page. Missing 1/3 of the "set" means there are several incomplete pages. The first complete page is the 1990 NL team, including greats like Greg Maddux, Tony Gwynn and Ryne Sandberg. The first complete year, 1997, is less impressive; Maddux returns, as does Ivan Rodriguez and Ken Griffey Jr. Most incomplete teams after 1980 are missing just one card, such as Buddy Bell (six times), Devon White (four times), and Torii Hunter (six times). Michael Bourn is the only player missing after 2006. (Before you offer to send cards, know that there was a card show last night where I could have picked up some of these cards - I'm writing this post before the show.) Stats are fun, huh? 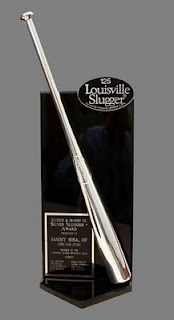 The other position-specific award is the Silver Slugger, which is given to the best hitter at each position. This award wasn't started until 1980, for a total of 559 awards (one year saw a tie at one position). Some players have won awards at multiple positions; Pujols won the award at third base in 2001, outfield in 2003, and first base four other years.

Of the 559 awards given since 1980, I have cards for all but about 35 cards - twice the success rate of the Gold Glove award for the same period. The most recent missing card is 2007's Micah Owings. Between Owings and Morgan Ensburg (2005), there are only two cards missing between 1991 and 2010. The first complete team is the 1980 AL team, including Robin Yount, Reggie Jackson, and George Brett. There are plenty of missing cards in the '80s, so the first complete year doesn't occur until the 1991 season that starts the massive block of full teams.

Since the Gold Glove and Silver Slugger awards were bundled in with the other awards in my list, I didn't realize how close I was to completing at least one of them. My goal over the next month or so will be to finish the Silver Slugger collection and to make as much progress as possible on the Gold Glove set. I'm not sure how successful I'll be at either one given the uncertainty of the next six months, but hopefully my upcoming clearance sale will bring in a couple trades as well.

I still have one binder left with several pages. I need to figure out what to display in that one!

By the way, how cool would it be to have a replica of each of those trophies (of your favorite recipient, of course) sitting on a shelf?
at 4:05 PM