A TCIC Feature: Looking back at 1992 Fleer Rookie Sensations

As I mentioned a week or two ago, I found 19 of the 20 cards in the super-popular Rookie Sensations insert set from 1992 Fleer. It's one of my favorite sets, not because of the subjects, but because of the beautiful, classy design.

But how did these sensational rookies do in the end? Let's find out! 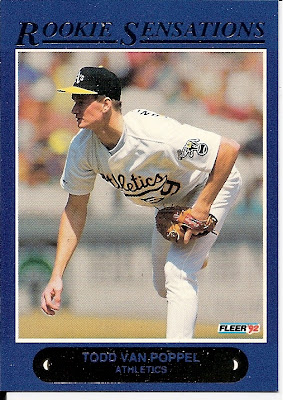 Todd Van Poppel was the A's #1 draft pick in 1990. According to his Wikipedia page, the Braves passed on Van Poppel for Chipper Jones (good move in hindsight, if you ask me). He was fast-tracked to the majors, making his debut in 1991, but was never really successful. Somehow, he lasted in the majors through the 2004 season, though his career record was only 40-52 with a 5.58 ERA. 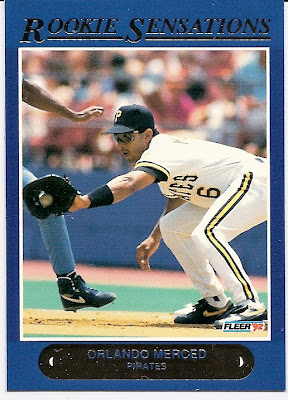 Orlando Merced was probably on this list because he was 4th in voting for the NL Rookie of the Year award. He was, at best, an average player, but it was good enough to keep him in the majors for 14 years. 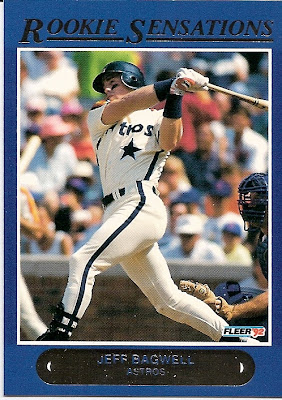 Jeff Bagwell won the Rookie of the Year award in 1991 and might be the most successful player in the set. He won three Silver Sluggers and a Gold Glove, was a four-time All-Star, the NL MVP of 1994, and his number was retired by the Astros. Bagwell was actually drafted by the Red Sox, but traded away in 1990 for Larry Andersen. 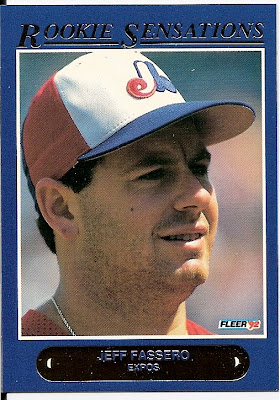 Jeff Fassero had a few decent years with the Expos and Mariners, but he was 29 in 1992, his second year of major league experience. He faded away as a starting pitcher and wasn't too successful in relief, and finally retired after the 2006 season. He's now a minor league pitching coach. 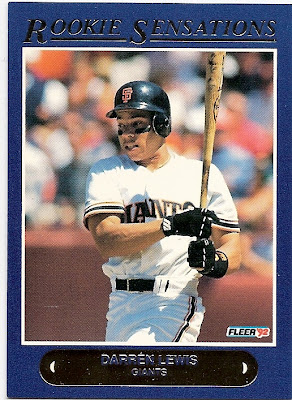 Darren Lewis was a career .250 hitter, but is better known for his streak of errorless games, at 392 (938 chances). He retired in 2002, and is now an assistant baseball coach at a San Francisco-area high school. 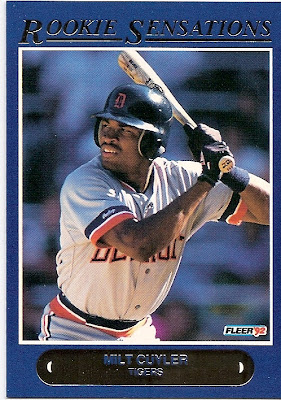 Milt Cuyler was a largely unsuccessful second-round draft pick. His debut was in 1990 and somehow he lasted through the 1998 season. He's now a hitting coach in the Gulf Coast League. 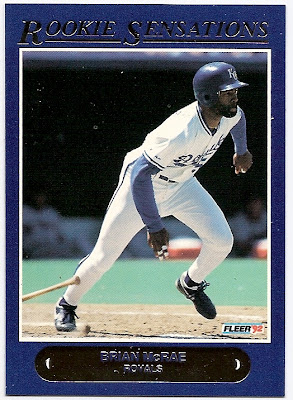 Mike Timlin got his start in 1991 with the Jays and was the pitcher who recorded the final out in the 1992 World Series. He pitched in over 1000 games, and was very successful in relief during postseason play. He played in his last major league game in 2008 and retired in 2009. 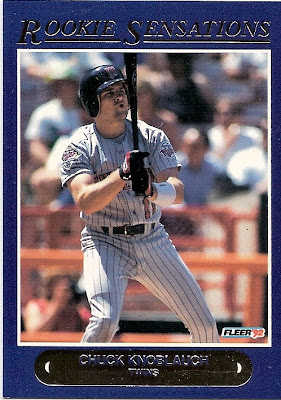 Chuck Knoblauch was the AL Rookie of the Year in 1991 as a member of the World Series-winning Twins. His best years came with the Twins through 1997, though he was a big part of the Yankees World Series championships in 1998 and 1999. He developed throwing problems in 1999 that he would never recover from, and retired in 2003. 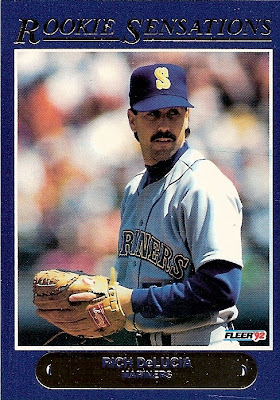 Rich DeLucia was less than stellar in his rookie 1991 season - he had a 5.09 ERA and gave up a league-leading 31 home runs. By the middle of 1992 he was a middle relief pitcher, and he compiled a 4.62 ERA in 10 seasons. His inclusion in the set is puzzling at best. 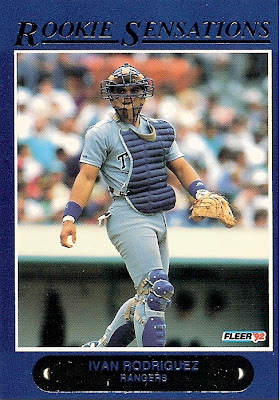 Ivan Rodriguez is still playing - the only one left from this set. He's most known for his fielding, winning a record 13 Gold Gloves, though he's an excellent batter, with a career .297 average, more than 300 home runs, and seven Silver Sluggers. He's currently training his eventual replacement with the Nationals as he platoons behind the plate. 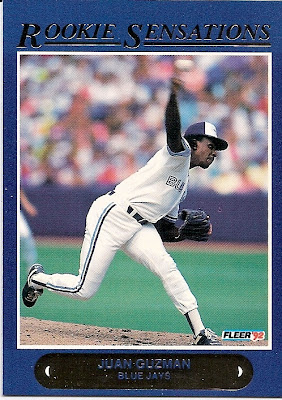 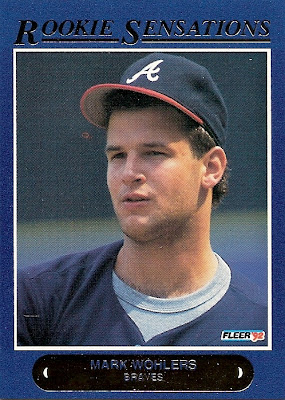 Mark Wohlers eventually became the Braves closer, being part of a 1991 three-pitcher combined no-hitter on the way. He was one of the best closers of the mid-90s, but after giving up a home run in the 1996 World Series, Wohlers would never be the same. He struggled through the 2002 season before finally retiring. 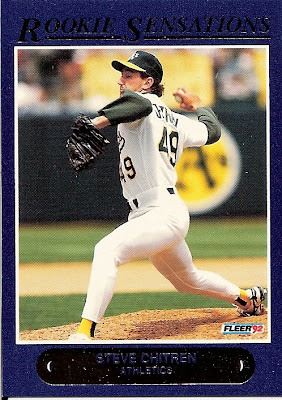 Steve Chitren is the second Athletic in the set, and was born in Tokyo. Chitren may be the least-successful player of the bunch. He had a good start in 1990, with an ERA around 1 in nearly 18 innings, but posted a 4.33 ERA in 60 innings in 1991 and never took the field in the majors again. 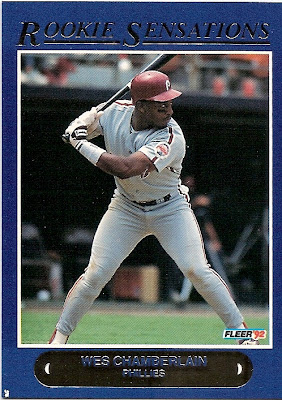 Wes Chamberlain was probably in the set because of his fifth place finish in the 1991 Rookie of the Year voting. 1991 would be his best year, however, and he would leave the majors in 1995. He played in Japan in 1996 and would play for some independent league teams through at least 2003. 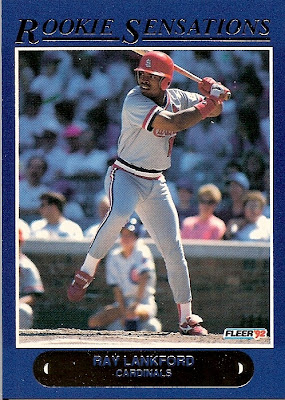 Ray Lankford was successful for Cardinals through 12 years, and despite an average batting average and large number of strikeouts, he had a high on-base percentage and good power and speed. I remember talks of him being the next Rickey Henderson, though that never materialized. 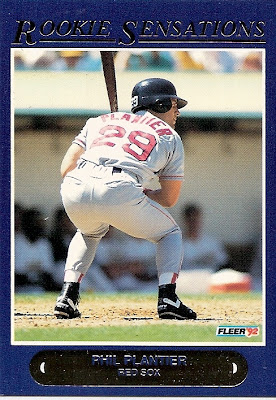 Phil Plantier had an excellent rookie season in 1991, and if he had put up those numbers for a full season he would have walked away with the Rookie of the Year award. While 1993 was a good year statistically, he never put up the kinds of numbers seen in 1991 and played his last game in 1997. His 91 career home runs are a record for players born in New Hampshire (who finds this stuff? It's on his Wikipedia page). He was promoted to manager of the Lake Elsinore Storm this season. 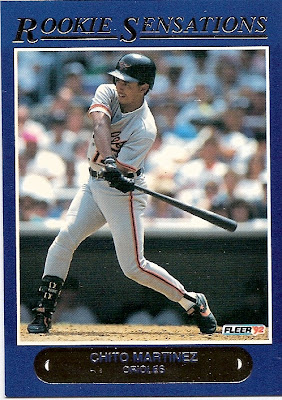 Chito Martinez was the first Belize-born major leaguer, and put up impressive numbers in 1991. However, he peaked early, and was gone after appearing in only 8 games in 1993. 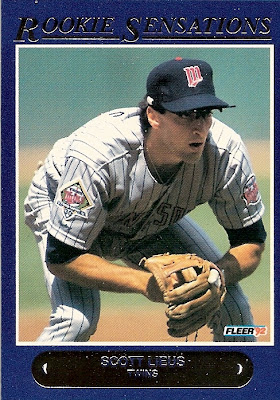 The last player for whom I have a card, Scott Lieus, hit the game-winning home run in the second game of the 1991 World Series, which might be why he received a card in this set. He had a successful first full season that year, batting .286, and was a quality fielder at third base. He managed to find his way into a couple dozen games a year in the late 1990s, but his career was essentially over after the 1995 season. His last game was in 1999.

The only player I'm still missing from the set is Frank Thomas, one of the three big players included in the checklist. After successful 1990 and 1991 seasons, there was no doubt as to why the Big Hurt was put as card number one in this insert. He is the only player to compile a career average over .300, as he hit 521 home runs over 19 seasons. He was a superstar through 2000, but still put up respectable numbers through the end of his career. He's the only other player in the set with a retired number (with the White Sox), though that could change when Rodriguez retires. He was a five-time all-star, four-time Silver Slugger, two-time AL MVP, 1995 Home Run Derby champion, and 2000 AL Comeback Player of the Year.

Looking at the list, only a couple players didn't make it beyond their third year, and while only three became HOF-potential superstars, several of the "Rookie Sensations" were productive for a decade or more. Why is that? I believe part of it is because all of the players had experience, with most of them making their debut in 1990. As such, they all showed promise after receiving major league experience. These days, most insert sets focusing on hottest rookies include mostly minor leaguers (such as the Bowman's Best Prospects insert set). There's no guarantee Bryce Harper will be successful in the majors or even make it at all. Another part may be research done by Fleer in deciding who to put in the set. Only a couple players were fast-tracked, and thus had time to develop and mature.

Will we ever see a set of this size with so many successful rookies again? It's possible, but not likely. The 2011 Gypsy Queen Future Stars set might be this year's comparison.