Matt of Cardboard Conundrum had a conundrum - too many cards, and probably not enough cash. He posted about some eBay auctions and like a good neighbor, Ryan G was there, bidding on a few of them. I wanted to win more, but I ended up with four nice additions to the Cardboard Zoo: 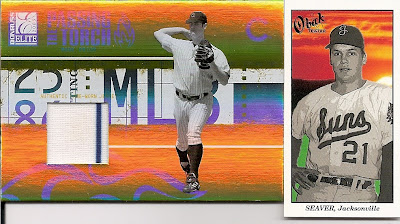 It's really tough to see the writing on the foilboard for that Mark Prior jersey, but it's a 2005 Donruss Elite Passing the Torch gold parallel jersey card, numbered out of 250. The Seaver is a mini from 2009 TriStar Obak. 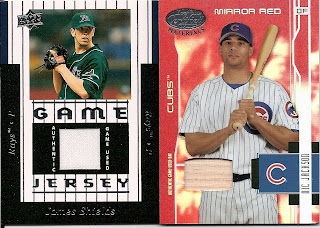 The Shields on the left is from 2008 Upper Deck, and is in the style of the original jersey card from 1997. I still need an original '97 jersey card. Heck, I'd like a whole set. It's only three cards, but the Griffey books for $250, Gwynn for $40 and Rey Ordonez for $25. It's tough getting them for much less. The other card is a Nic Jackson mirror red game-used parallel card from 2003 Leaf Certified Materials, numbered to 250. The flame background is kind of neat in the scan, even if it doesn't look as great in person.

Thanks for the auctions, Matt, and the super-fast shipping! Five-star feedback is on the way.
at 4:58 PM