It pays to be patient, sometimes.

We all remember the Gypsy Queen craze of 2011. Everyone and their mother wanted to build the set. The base set (without SPs) has an amazingly high book value of $60, after all. I finished my set in June, thankfully, though now I'm thinking I'd like to try to build the SP set. That's probably a bad idea. But one plan that wasn't: putting together the insert sets this summer. 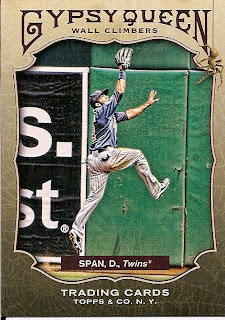 The Denard Span card was the last one I needed for the Wall Climbers insert set. Most of the set was found in dime and quarter boxes. Most of the cards from the other insert sets in Gypsy Queen were picked up for 10-25 cents each, as a matter of fact. This month, I finished off all the inserts except for The Great Ones (I still need 13, 15, and 28), and this one: 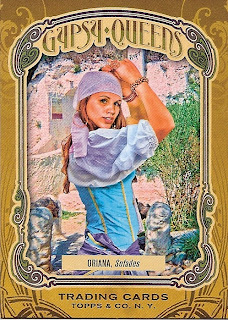 The Gypsy Queens set is the toughest insert set to complete in Gypsy Queen, hands down. I find one or two cards a month at reasonable prices, with reasonable usually meaning the dollar boxes. There are still eight cards missing in my set: 3, 4, 6, 9, 10, 13, 16, 19.

If I'm patient, I'm sure they'll show up at a card show.

I've also been patient with the Bowman's Best insert sets, and that patience has paid off. 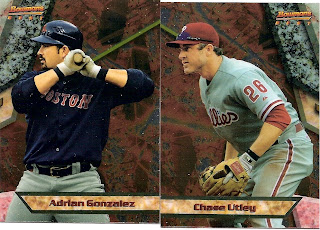 These two were in dime or quarter-style boxes. I also found Pujols sitting in a dollar box. Buster Posey and Stephen Strasburg are the two remaining players. Posey won't come cheap around here, and Strasburg is a gamble. I may just go to Sportlots for them in the next month or two - all the Best and Best Prospects other than Harper can be had for a total of about $6.25 right now.

I'm starting to get impatient with this set - the 60 Years of Topps Series 2 set. All together, the second series seems to be harder to find. Maybe the bloggers bought less this time around. But I found a few: 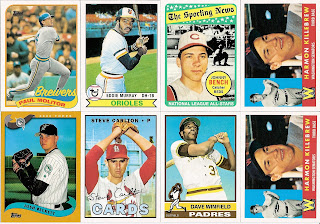 Yes, I managed to purchase doubles at a show. I do that more often than you'd think. Double or not, the checklist of needed cards whittles down.

But even with those cards, the task of finishing my series 2 needs (with Kimball and the base set) would still seem daunting if it wasn't for Dan.

Dan was cool enough to just randomly, out of the blue, send me some cards sitting on the want list! 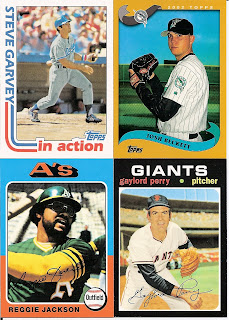 Four more cards from the 60YOTs! 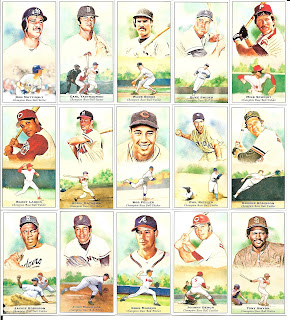 Dan didn't send all of these, but he did send almost all of them! Scans look better in rectangles, anyway.

Thank you very much, Dan! I'll be sure to return the favor soon! I'm sure I have a bunch of cards off his lists.
at 3:00 PM