Coolness on Cardboard: What should Panini bring back?

This is part two of a six-part series on Panini's Return to Baseball. Part one is here.

It's odd what history Panini has chosen to resurrect in the past few years with the Donruss/Score/Playoff names. I always get the feeling with Playoff that their goal is to create designs with as many straight lines and corners as possible. Is this supposed to copy the rigidity of the football field? Remember, Playoff primarily issued football cards until 2001. Many of the Panini designs seem to have the Playoff feel, which looks great when you're showing pictures of men covered in 50 pounds of plastic and foam, but not when you're showing guys playing on grass.

Donruss has a good bit of history, though, and Playoff had some highlights in the five years they produced licensed baseball cards. Here are some of the cards I like. I would love to see the concepts resurrected at some point! 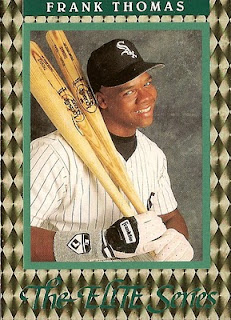 Elite Series Inserts: This insert set was *the* toughest pull in 1991, unless you were trying to pull one of those Hank Aaron autographs I talked about earlier today. Each card was numbered to 10,000 - a large number today but tiny by 1991 standards. Even today, it's very difficult to pick these up. I am trying for a master run, but I know that's one of those goals I'll probably never meet. The inserts were always special - the early '90s had awesome foil designs (see the 1992 example above) while later issues had classy designs. On the other hand, the Elite set wasn't as attractive. Sure, it was limited, and sure, it had foil, but it just wasn't The Elite Series. 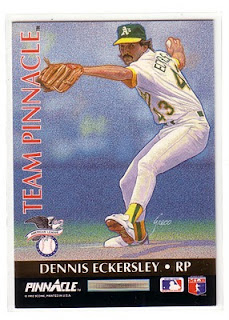 Team Pinnacle: The first few years of this set's inception had the best player at each position for each league (one player on each side) on a simple design with high quality art. As much as I dislike multi-player cards, and multi-fronted cards, this set just looks too nice. Later issues just had fancy or foil-based designs with photographs, which isn't the same. The art made this set what it was. The fact that they were tough pulls in 1992 didin't matter. Nope. Not at all. 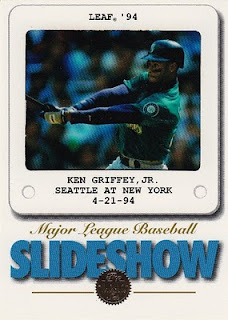 Slideshow: Panini can't use the Leaf name anymore, but that doesn't mean it can't make Slideshow cards. Leaf went through several different designs, but they all featured semi-transparent acetate images. 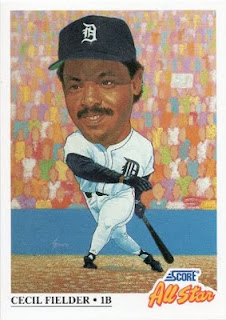 Score All-Stars and other subsets from the early 1990s: Score experimented. They made all kinds of subset cards for their base sets. Some of the cards in one set were pictures of memorabilia from the Hall of Fame. There were black-and-white images of the best players from each team, and these cartoonish All Star cards inserted in the middle of the set. The gigantic heads on the players only made this set more interesting. Note the artist signature on this card and the Team Pinnacle card above - the same artist appears to have done both issues (or at least both cards). 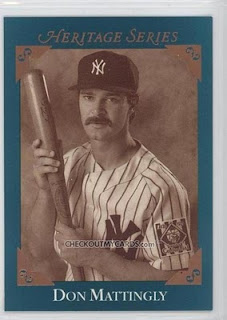 Heritage Series: This annual insert from Studio put players in throwback uniforms. Granted, with no MLB Properties license, they can't use MLB uniforms, but I wonder if they could get the superstars back into their high school uniforms, early logoless or vintage-inspired uniforms, or even some uniforms with logos that are no longer trademarked, such as defunct leagues. Could they work something with the Negro Leagues? How about the old blue-collar leagues? 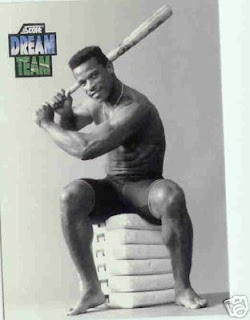 Dream Team: This should probably be grouped with the Score subset cards above, but what guy doesn't like pulling a card of Rickey Henderson wearing nothing but his underpants and gold chain? Naked men aside, the use of interesting, player-specific studio images made this a successful release. 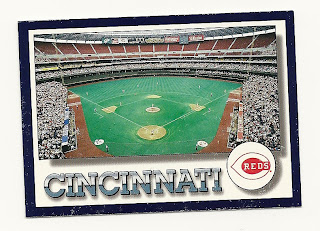 Score team checklists: 1994 Score used photographs of stadiums for their team checklists. It wasn't the first, and it hasn't been the last. 2010 Upper Deck used photos from outside the stadium, which was unique. 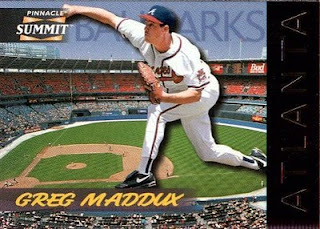 Summit Ballparks: Instead of sticking team checklists on the back, Summit cropped a photo of a player and pasted it over a photo of his home ballpark. (Hey, that's a beer advertisement in the upper right corner!) This is just another idea of ways to get photos of ballparks into cards (depending on legality). 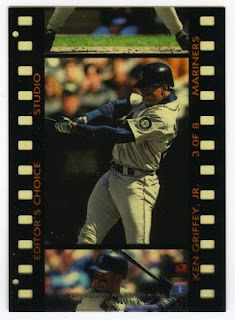 Studio Editor's Choice: Like the Leaf Slideshow cards above, these cards are best viewed when backlit. 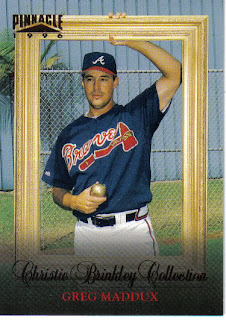 Christie Brinkley Collection: This set continues to interest me 15 years after its release. I like the idea of giving a photographer (or celebrity) the ability to create unique shots. Upper Deck had a similar release a few years prior to this set's issue featuring photography by Walter Iooss. 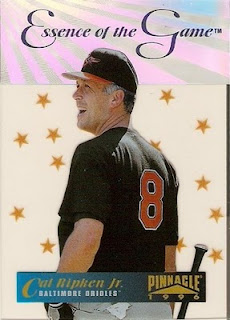 Essence of the Game: I like this card because it's a nice combination of foil, clear plastic, and high-quality photography. It's not gaudy, but it stands out. 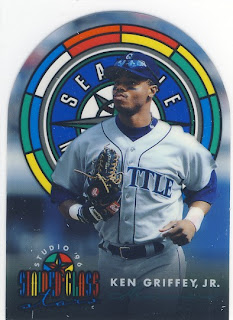 Stained Glass Stars: Topps released an insert set similar to this called Gallery of Heroes for a few years as an insert to its Gallery issue. It's another example of a good use of acetate to make a trading card. 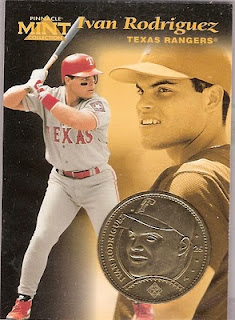 Pinnacle Mint: This set wasn't very successful in its time, but these days Topps is sticking coins in several of its cards. It's a unique release, though, and one of the several experiments that Pinnacle attempted in the late '90s. 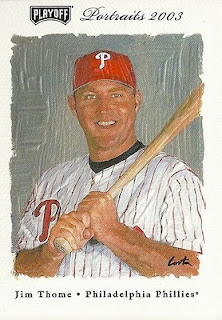 Playoff Portraits: This set was issued only in 2003, but it's a quality art set that is attractive without being a throwback design. I bet Playoff decided that issuing the Diamond Kings art set was enough in that area. 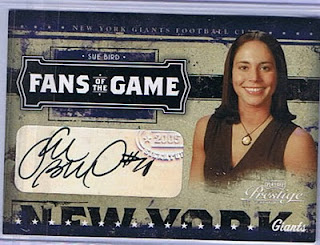 Fans of the Game: This line has carried over from baseball to the three other sports Playoff and now Panini have licenses for. I'm sure it will return. It's a simple concept - celebrities who have a favorite team, plus an autograph version. I'm waiting for an Alyssa Milano card, but I'll have to fight all the other Alyssa Milano fans, Dodger fans, and set builders. Why hasn't Elisha Cuthbert been featured on a hockey card set yet? She dates hockey guys all the time. 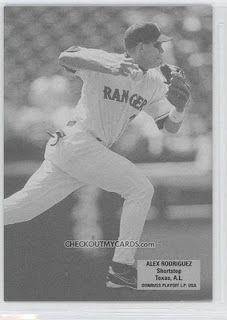 Leaf Exhibits and Sportscasters/Throwback Threads Polo Grounds: Playoff took the idea of variations to the extreme in 2004 when it issued these sets. The Exhibits set contains forty-four variations copying the variations found in the Exhibits cards issued during the first half of the 20th century, namely the printing found on the front of the card. The cards were all serial numbered to low numbers A retail "Second Edition" release was printed in blue instead of black, and wasn't serial numbered. This makes 88 variations in all. 2005's Sportscasters insert had a whopping 140 variations (changing the color of the upper border and two of the icons in the upper right), again numbered to 70 or less. There were nearly three times as many variations a actual cards - the set had 50 subjects. Polo Grounds was also issued in 2005, but had "only" 45 variations, based on the printing around the photo. While the variation idea was taken way beyond what most collectors could fathom (what player collector wants 140 versions of the same card with only small changes in icons and border color?), the issues could have been done a bit differently. I don't recall Playoff ever issuing a real throwback release, other than Donruss Originals, and Sportscasters and Exhibits would have been good throwback sets. The different border colors could be different parallels in a Sportscaster release (leave out the small icon variations) and Exhibits could be issued over several years with the different variations. 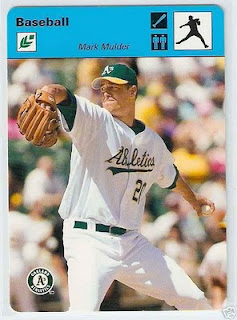 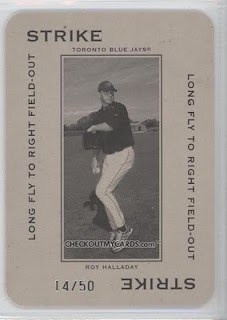 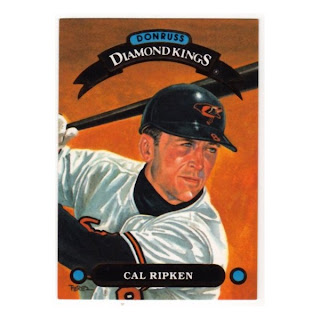 Last, probably my favorite set of all time, Diamond Kings. Done right, the cards look great - be it on 1988-1991's mass produced junk wax, 1994's vibrant designs, or 2002's first full release (below). Diamond Kings went bad in 2005 when the set did the "Playoff" thing and shrunk the image to about an inch in diameter to make room in the massive bottom border for relics and autographs and room to put a frame around the cards to increase the number of limited parallels. 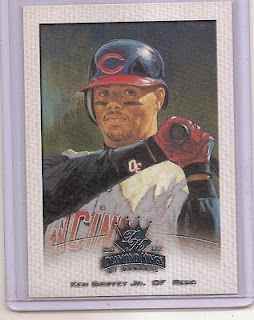 I don't think most collectors hate inserts. I believe collectors want to see something "new" in their inserts. People went batty over the Gypsy Queen framed parallels - they looked good but had been done before (2005 Diamond Kings comes to mind). If Panini wants to stand out in baseball, they can take clues from some of these prior inserts and sets. Notice something similar about every one except Fans of the Game? The cards were designed and executed around a concept other than "leave room for autographs and relics." Most of these ideas can be used without an MLB license. Art cards can easily be commissioned without team logos. Fans of the Game can be done without mentioning the team. Interesting photography can be done without logos. I'm not saying hang out at the gym and catch Pablo Sandoval trying to walk on a treadmill, but this photo on a card would be in my collection as fast as I could bid on it: 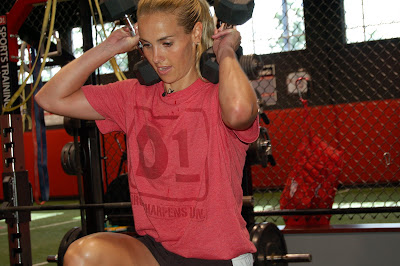 Heather Mitts working out. No real logos, and it's a somewhat interesting photo.

Here's an idea completely off the top of my head. Instead of 150 cards showing players standing in front of a studio wall during spring training, arrange to photograph the players in the offseason to see what they do when they're not at the ballpark. Are any of them working a second job? They don't really need to anymore, but you never know. What are their hobbies? Do they do charity work? Do they stay in shape by doing something unique during the offseason? Do they have a nickname other than X-Rod? Where did it come from? Can you create a photo shoot around some of their traits (look at the Rickey Henderson card above)?

Remember, Panini: Your goal is to show collectors and MLBP that you are bringing something special back to the hobby. Part of that is bringing attractive designs - especially with inserts that mean something. The inserts (and sets) above mean something or provide something worth collecting. 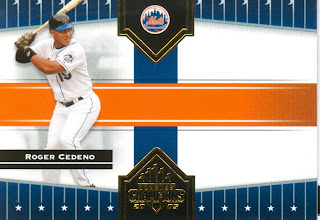 Shame on you, Playoff. Shame. On. You.