What is the purpose for including cheerleaders in a card set? Do these young ladies provide any sort of benefit to the team? If the Gold Rush (is that right?) don't show up for a game, do the 49ers play worse?

I know the answer. NFL cheerleaders are eye candy. They wear uniforms that are on par with a stripper's wardrobe and they shake their bodies and kick their legs to give you something to look at between plays. The same can be said for most college cheerleaders as well. While high school teams don't (and really can't) discriminate on looks, when is the last time you saw a fat girl walk on the field in a Dolphins cheerleader uniform? 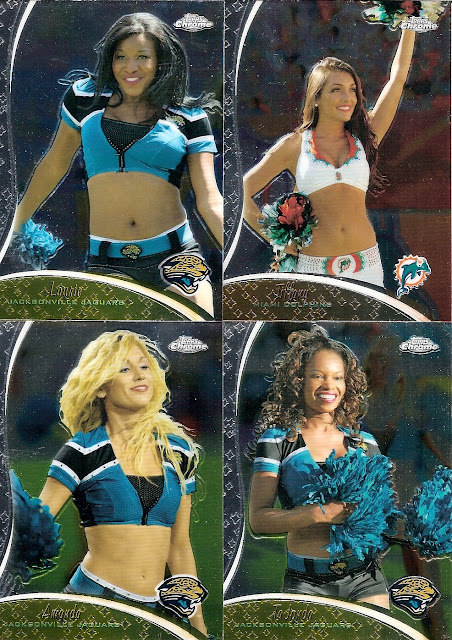 There have been several NFL cheerleader sets over the years, and I'd like to think I have them all - other than team issues of course. The oldest set in my Women In Sports collection is the 1981 Dallas Cowboy Cheerleaders set, printed in large format (4"x8" I think). Ten years later, Lime Rock issued two sets - one for NBA cheerleaders and another for the NFL. The Cowboys and 49ers issued sets in the early '90s, and another large NFL set was issued in 1994. But then, things got quiet. The next (and last) set to be issued to my knowledge is seen here, an insert set in 2009 Topps Chrome. 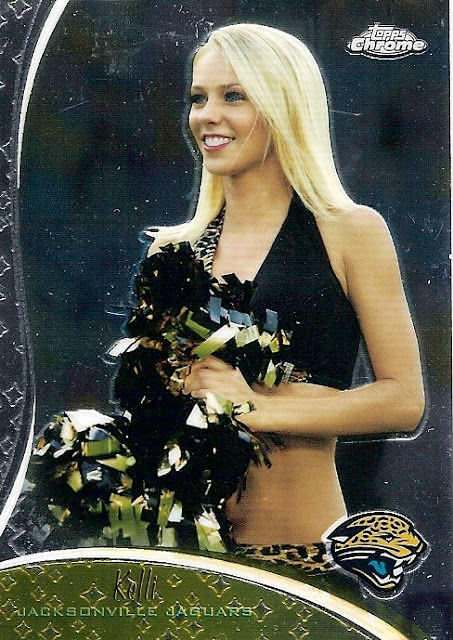 Of the five cards shown, Kelli is definitely my favorite. A quick check of the Jaguars Cheerleaders website (thanks, Google!) shows that she is still with the team - her fifth year - and she's only 22. She's been there since she finished high school? Wow.

Cheerleader sets are tough to locate. Other than this insert set, the releases aren't listed through Beckett, and only some of them are listed in the non-sport equivalent (Non-Sport Update).

Does anybody know if cheerleaders do fan packs, like MLB teams do?

By the way, those of you waiting on the National Chicle list - it's coming. I've been sick since Sunday evening so I've avoided anything requiring deep thought. Cheerleaders require no thought at all!
at 3:00 PM