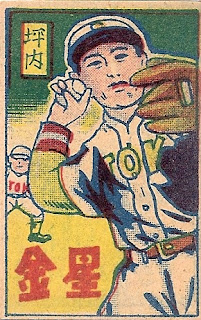 What does the Japanese language and this menko card have to do with my contest?

If you read the drivel I post here instead of just looking at the pretty pictures, you might remember that this weekend was a busy one for me. Saturday was an all-day seminar/interview for a job to teach English in Japan.  I don't want to count my chickens before they're hatched, but if things work out like I hope (and expect) them to, I'll be posting from the greater Tokyo area in six months. Or somewhere in Japan.

After the interview, I was able to spend some time browsing the Serramonte card show, and came home with quite a few goodies. I returned Sunday morning to hunt for some trade bait, mainly for people I owe. I think I've finally assembled a decent package for Dominic, I have a relic for Jim when I meet up with him to see Moneyball, and I picked up a Biggio dual relic for Sam (The Dimwit). Plus, I have a Russell Martin autograph that I hope Greg Z might want, or if not, maybe somebody else can jump in. I might have found a couple things for Jeff L and Napkin Doon, but I'm not too happy with my offering yet. I may have to hit the 'Bay for them.

After the show, I hit up a festival-type thing and wore myself out (note to self: start carrying water or something, because you keep dehydrating yourself when you go places). I was going to check out an art exhibition but had to pass.

Look at me telling you all this like you care! But, I can say that this weekend was very successful, in the future career front, keep-myself-entertained front, and trading card front. I now have so much card-related material to write about that I shouldn't need to buy any cards for a month. Not that that will stop me!

I'll write those later today, though. In the meantime, I have a contest winner to announce.

The contest was a means to an end, mainly to better-understand the habits of my readers. My findings:


I noticed (partly inspired by the comments) that my blogroll didn't have all the blogs I was following. I fixed that - sorry to those who didn't show up for the past several months. I'll have to check it monthly. And knowing that there are over 380 blogs out there (dayf reads them all when not watching ponies) means that I've got to be missing some out there.

But that's not why you're here. You're here to see if you won. In fact, I bet you didn't read any of the above, and instead simply scrolled to the image below. I don't blame you.

There were 32 entries into the contest (33 comments, 2 by one person), all of which were crammed into random.org and scrambled like the eggs in a McDonald's breakfast sandwich. 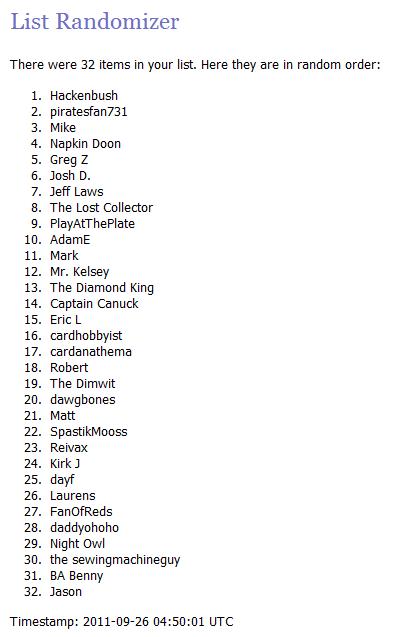 Hackenbush, you're the next contestant on the randomizer is right! Hackenbush is a mathematical game that is incredibly complicated to master but easy to play. At least, that's what I'm guessing. I suppose it could be like the Rubix cube, where once you know how to work the algorithms, it's not too tough to win. 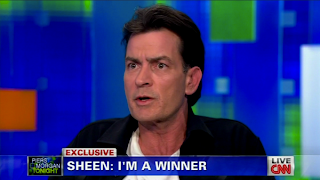 This Hackenbush runs Can't Have Too Many Cards, which has been running for over two years. His most recent post (Sunday night) was about the end of REM, a band I "discovered" in high school when Everybody Hurts got all that airplay. I wandered through their catalog and discovered much of their older hits, and I was lucky enough to be in the front row when they came to Atlanta a couple years ago.

Hackenbush, please leave a comment or email me with your favorite team and players - I think I know but I want to confirm! I'll then begin the hunt for your prize winnings.

Thank you to everyone for your input! Back to baseball cards in 12 hours!