You have to give Donruss credit for trying.

If you asked me what my favorite brand was in the 1990s, I would have had to replied Fleer, because their sets and inserts were just too-well designed (if you like the '90s stuff, which I do). But Donruss would have been second, especially once they were absorbed into the Pinnacle Brands failure of a mega-card company. The Donruss and Leaf product lines never really interested me, but Diamond Kings were cool, and Studio was one of my favorite sets. While most of Donruss's early attempts at chase cards (other than the DKs) were relatively uninspired, they found a good mix with several sets starting around 1994.

One of those quality sets was the Mound Marvels release: 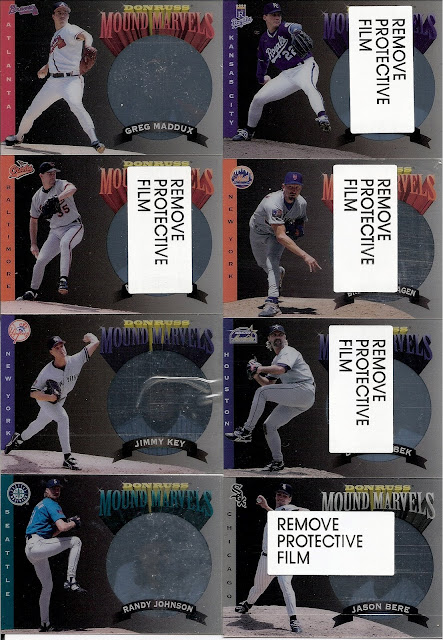 Scanning the cards does nothing to help them look nice. To protect the shiny surface, some sets were covered with a protective film that could be peeled to "reveal" the card beneath. It really wasn't some magical surprise with most of the cards, though some sets were covered in a black film that you had to peel to know what was beneath. All of these cards have their protective film. The "REMOVE PROTECTIVE FILM" sticker was really easy to remove, and I remember removing mine from most of the cards I pulled in the '90s. You can even see the film bubbling on Jimmy Key.

The special film and shininess isn't what makes these cards cool. Instead, it's something I didn't even notice until I was scanning the set, and it's something you can barely see. Inside the circle is a transparent window with a portrait of the player. It's most noticeable in the Jimmy Key card. At first, I thought the circle, which in most instances appears as plain silver, was a failed attempt at a hologram image or was supposed to represent a mound or baseball. I suppose if I peeled the cards I would see the shininess and transparency better. I may just have to do that. The temptation is unrelenting.

The set is a who's-who of 1995 pitching, though Maddux and Johnson are the only two who became true superstars. This would be my third-favorite insert set in the 1995 Donruss release, behind Diamond Kings and the Elite Series inserts, of course. The set is full with these eight cards, and it's headed as a featured set in my This Card Is Cool collection.