A Double Big Mac, and maybe some fries? 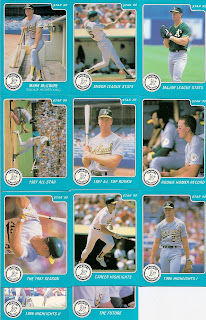 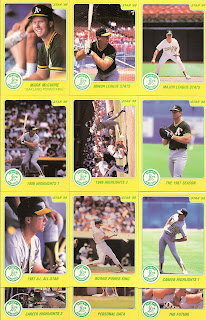 Some of the most annoying sets to collect for the Cardboard Zoo collection are the small single-player sets issued by companies like Star and Mothers Cookies. At least Mothers used glossy card stock and full-bleed photos. That and minor league team sets - some teams have three or four issues in some years, all really made by the same company(ies) (CMC/ProCards/Best). Even some players had multiple sets from the same company, as evidenced by this pair of Mark McGwire sets issued by Star. In 1988, Star issued four sets involving Mark McGwire - one where he was paired with Eric Davis, and three solo-subject sets. Funny thing - these two sets say Star '88 but both carry 1984 copyright dates (the third solo set has a 1988 copyright). I wonder how much each set cost from a dealer. I find full sets like this for a dollar or less all the time.

The photos aren't bad, though the bright colors on a plain design won't get these cards any points with collectors. I'm sure player collectors in the late '80s enjoyed these sets. I remember having a Jose Canseco set from CMC in 1989 that came with a little record and an album. The record wasn't that exciting. I wonder if I still have it. Probably not, but wouldn't that be cool?