Despite owning the baseball card market in the 1960s and 1970s, Topps liked to experiment. This is evidenced by the crazy collection of inserts and test sets issued over those two decades - cloth stickers, embossed cards, decals, deckle-edged cards, posters, booklets, coins, giants, stand-ups... the selection is certainly there, and much more unique than the standard inserts found in today's packs. The one aspect of Topps that kids could count on was the issuing of multiple series through the year. It makes sense - kids would buy more packs throughout the year if there was something new waiting for them every month or so. As a kid with a quarter walking into the corner store in July, would you choose the 4-month old cards you've already seen over the brand new comic books or a candy bar? Of course not! But hey, what's that? The third series is out? Cool!

Well, 1974 was different. Rather than spread the 660-card set out over the year, Topps decided to go with a single series. That was probably a pretty bad choice in a year that had the possibility of a team moving across the country, which resulted in Topps printing cards for players on a team that never existed. But that's another story. Several trades went through in December, and later in the 1974 season Topps inserted the first "Traded" set into regular 1974 packs. 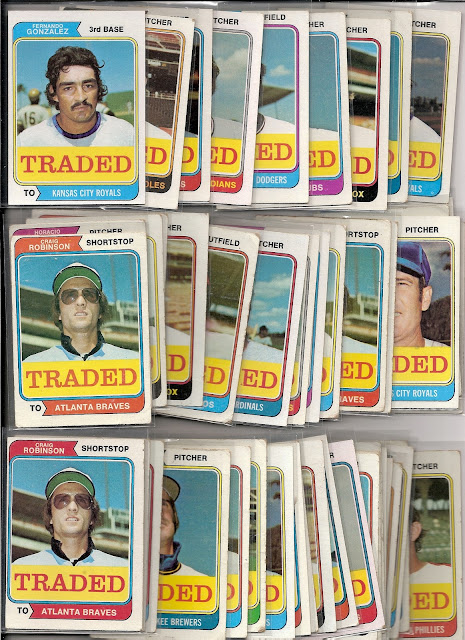 The set was released similar to 1989 Upper Deck's "Final Edition" in which the cards were mixed in with the rest of the set. The cards are numbered the same as their regular cards in the set, except for a T suffix, while the backs have a newspaper design to explain the trade.

This set is famous (or is it infamous) for its photography. You can tell from what's visible of the cards in the scan above, that the cards feature head shots and heavy airbrushing. The set is complete at 44 cards, with Juan Marichal, Ron Santo, and Lou Pinella being the key cards.