National Chicle, One Year Later (Yet another box break!)

It seems like I'm opening a lot of boxes lately. And I suppose I have. Well, two retail boxes I've had for months, and that 1997 Pinnacle XPress box earlier today. And I have packs opened waiting to be scanned, plus a bunch more packs I bought earlier this week that haven't even been opened yet.

I think it's time to get this sucker out of the way, so let's do this in three parts. There are 24 packs per box, so I'll give you eight packs at a time. Like the Topps Update box, I'm busting this just for fun, so if you need any of these cards let me know! A few cards may be kept for my collection. As with the Topps Update box, I'll have a full checklist of card numbers and such after the break is complete. 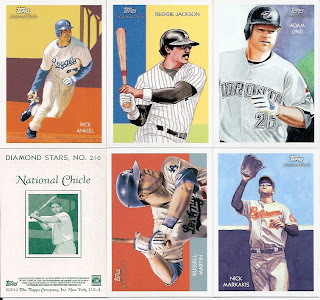 Pack one: our first insert; National Chicle backs come 1:4 packs. That's Robin Yount. This was a pretty good start, with Reggie Jackson, Russell Martin, and hometown hero Nick Markakis. I love the art in this set and I wish it would come back, even as just an annual insert. 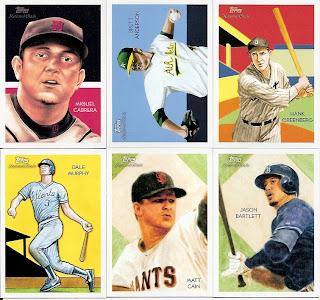 This pack shows two art extremes - the Cabrera is very bold and in-your-face (or his face, I suppose), while Murphy appears faded and pencilly over his bright yellow background. 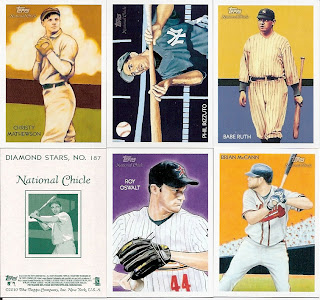 Yet another Chicle back, Joe Saunders. Three vintage New Yorkers fill the pack. 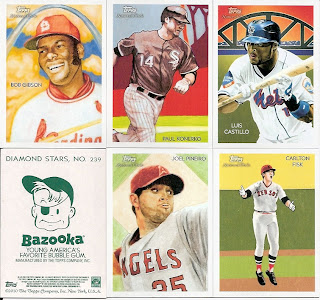 My first Bazooka back, inserted 1:8 packs. This set is loaded with retired stars, which is kind of cool. I like the arch behind Gibson and the bridge behind Castillo. 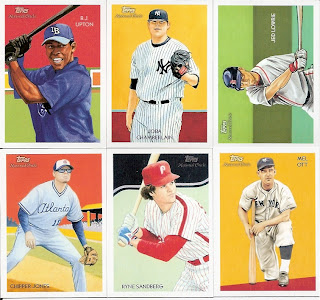 Wait a minute, what's that? An SP? Yep! Chipper is a short print! 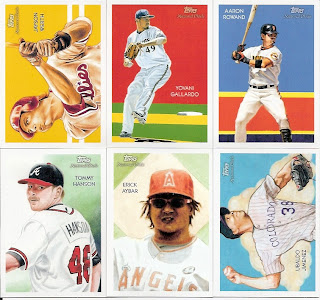 Back to a sense of retail normalcy - no inserts and no big stars. If every pack was like this it wouldn't be a very exciting break, now would it? 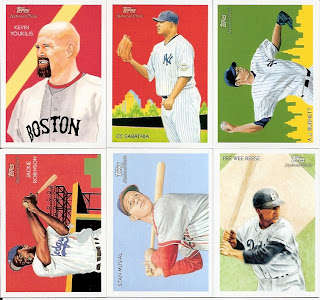 Another pack with several vintage players. In fact, the whole pack is full of vintage players, New Yorkers, and Bahstonites. If Topps had their way, that would be the entire set. 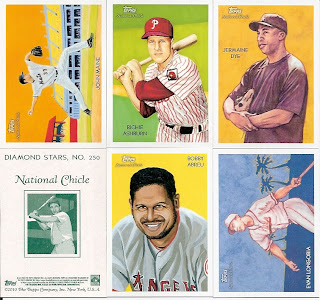 And we'll finish out the first eight packs with another Chicle back, meaning we're a little over average on the Chicle parallels. Number 250 is Joe Morgan.