How do card companies compete with video games, in-your-face TV advertising and Disney programming, and instant-update websites? This is a question for which there is no real answer.

There have been many attempts at making cards more interactive. Topps was part of a product towards the end of the 1980s which played clips with a special device. Post inserted baseball CD-ROMs into its cereal boxes one year. Upper Deck tried baseball card-sized interactive CD-ROM sets called PowerDeck. Pacific created a website which tied directly into the Pacific Online release. Card game inserts have been added to products to drive collectors to company websites, where entering codes can unlock online features, collections, points, and games; most recently Topps' Million Card Giveaway and Diamond Anniversary unlocked actual cards that could be mailed to your house. There have been all sorts of devices that play sounds. One of those is the ProTalk audio card. 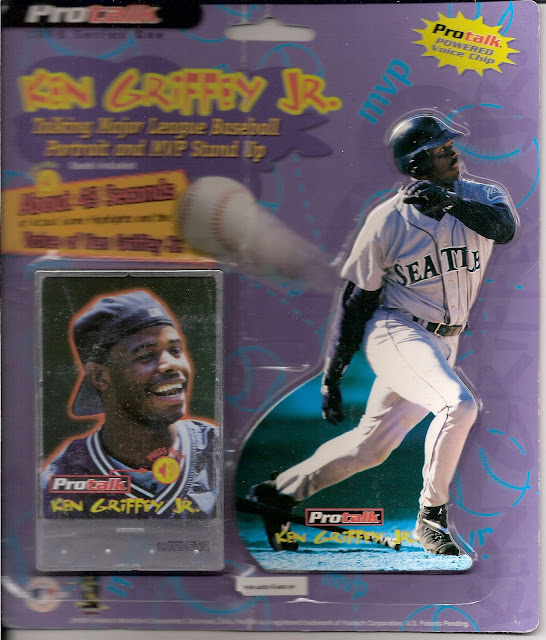 Two "sets" were released between 1998 and 2000, with one (seen above) devoted solely to Ken Griffey Jr. The Griffey set contains only four cards, each accompanied by a stand-up figure. All four stand-ups can see on the back panel advertising. Pushing the speaker button on the card should provide 45 seconds of audio from the event specific to the stand-up. For instance, this stand-up has audio from his 50th home run (of the season, I assume). The packaging on this card makes it impossible to sample the audio - if you compare this to the scan below, you'll see the Griffey card is contained in a hard plastic case, while McGwire is not. Since the package is still intact, even if not mint, I have no way of knowing if the audio works. 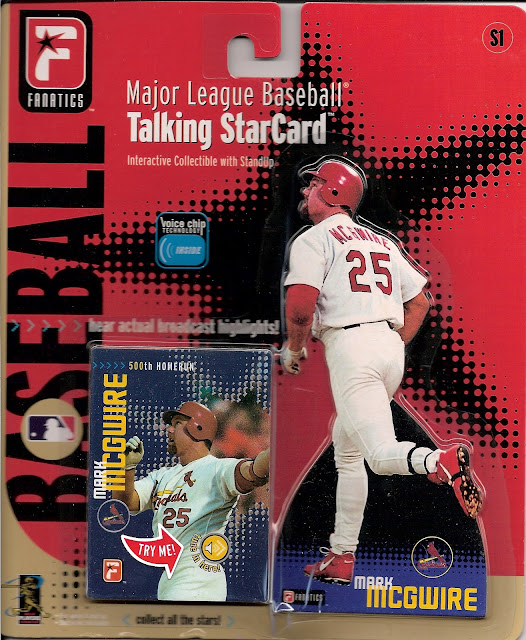 The second set issued over the time period was the red-backed regular set. The McGwire carries a 2000 copyright date on the back, but the upper-right corner of the front seems to identify this as still being part of series 1. There are fifteen cards total, with one or two issues per player. Players with two cards have different highlights. Unlike the small Griffey set, this card's audio button can be pressed. I made the mistake of testing it out, and was subjected to about 40 seconds of a high pitched soft whine, much like the sound effect heard when Wile E Coyote would fall long distances. Then, when all hope was lost, I heard a small bit of the original clip, the radio broadcast from McGwire's 500th home run.

It could be worse. You could have a device that does this:
Let's be glad there's a stop button on that video.

It's a fun product if it works, but products like this have a hard time finding a home, torn between digital gamers and internet users who want more than a simple audio product, kids who don't have much allowance to spend on products like this, and collectors who don't connect with these "gimmicky" hybrid products.