These two cards are the most recent additions to my type collection. You'll see them over on the Cardboard Zoo eventually, though I'm trying to avoid 2011 stuff since it's so new. I'm glad to have these: 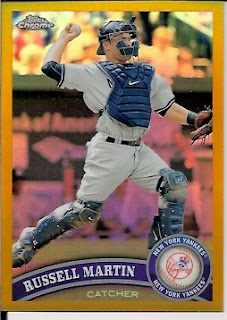 Numbered 37/50, I know some people who would love to have this Russell Martin card. I picked it up for only a couple bucks. Once my other Chrome cards get here from Derek, I'll be able to focus on attacking as much of the types for the issue. 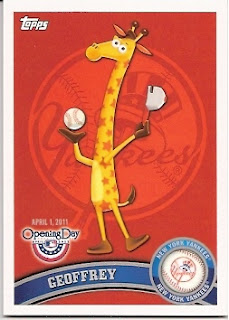 Here's a card you may have never seen before. I'm not sure how many exist, but this is the only honest-to-goodness-it-actually-exists copy I've ever laid my eyes on. There are five versions: Yankees, Red Sox, Phillies, Cubs, and Giants. I see a sample image on Sportscardradio.com and it appears that Geoffrey's pose may change for each card. I tried locating Opening Day cards in the Toys R Us stores around here and was unsuccessful, though it appears they might have been issued one per blister pack. I wonder why none of them show up on eBay, COMC, and Sportlots. I am now one card away from finishing my first 2011 type set! I just need a printing plate. I probably overpaid for this silly thing, but at this point I'm anxious to get this completed.
at 3:16 AM