A better tribute: McGwire or Ichiro?

Before MLB authentication, PSA, and JSA, there was Upper Deck. As certified autographs were still in their infancy, the company created a division to bring authenticated merchandise to rich collectors. Mickey Mantle was one of the signers for some of the many autographed memorabilia offerings, but UDA had the occasional authentic event-used race car. More UDA than UD, several special cards and card sets have been released over the years to commemorate events and players.

I found a couple cards over the past month honoring two events around the turn of the century... 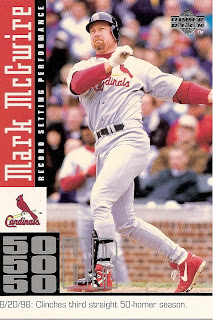 The first is this card from the 31-card set about McGwire's 62 home run season in 1998. The full set was distributed through the Home Shopping Network as well as retail and hobby channels for $19.99. Each card is 3-1/2" by 5" and focuses on a specific home run that year. There is a limited edition jumbo card commemorating the 62nd home run that was offered on HSN and then through dealers in addition to this set, which has the same basic design as this set. 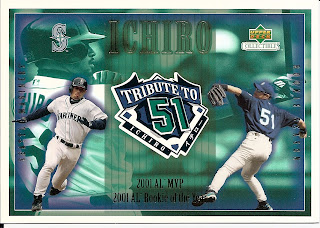 The Ichiro Tribute to 51 set was 25 cards deep, with some cards being "regular" cards and the last five identifying milestones in the 2001 season, all normal size. This card is a special jumbo card (again, 3-1/2" by 5") included with the set and sequentially numbered on the back.

Which tribute is better? Hands down, I choose the Ichiro card. There is more actual design to the card, with several photos, gold foil printing, and an attractive logo in the middle. A future issue commemorating the 2004 Red Sox season (it's towards the bottom of the page) isn't as attractive as this card.
at 3:00 AM