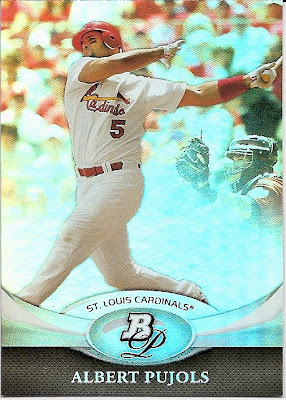 I started with my strongest hand. Or best card. However that works. It's not because this is Albert Pujols, but because the card is just that great-looking! Pujols stands out over everything else, but the crowd and catcher are bright and colorful. 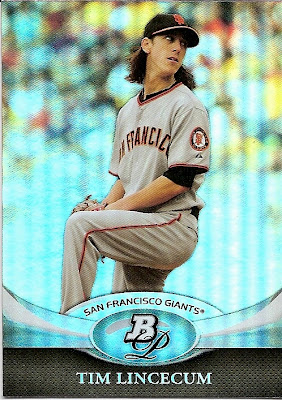 Compare that to Timmy here. The fans in the background just don't add a vibrancy to this card like the red and white hats and jerseys of St. Louis. Having an away picture of Lincecum is kind of lame. The Giants seem to play at least two day games per week - you mean to tell me he didn't pitch in a single one? 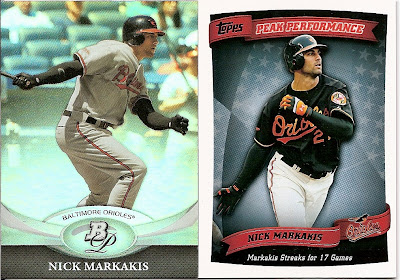 The Markakis Platinum card would have been better, had the stadium not been just so completely empty. At least it's not at Baltimore. Do the Orioles not play a lot of day games? Where was this picture taken that there aren't any fans in the stands? I guess I could figure it out, but I'm not that curious. 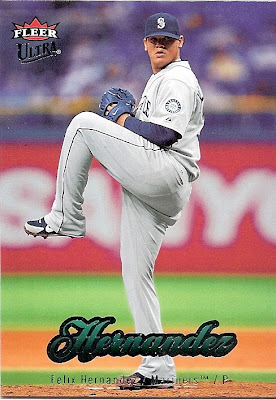 While it lacks the holofoil card stock, the Ultra line usually has quality photography. This image is fairly boring (thanks, Upper Deck) but at least the image quality isn't reduced. With all these away jerseys, I have to wonder where all the photographers get their images? And if Topps doesn't have a photographer in San Francisco, would they like to hire me?
at 12:35 PM