Sunday was a good day for retail pack hunting as far as I was concerned. I managed to find Topps Stickers, Topps Chrome, and TriStar Obak all at the only Target I checked. Remember, there are three within 10 minutes of my house, and they're all in the same direction. Now, so far it wasn't great for pack ripping, as the Chrome rack pack revealed nothing special. Will the two five-card Obak packs provide something big? 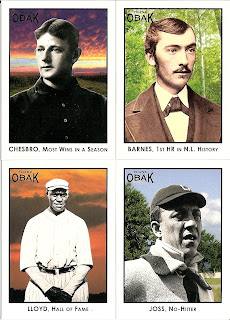 Each pack has five cards, including one mini. There's a shot at parallels, mini parallels, autographs, mini autographs, and cut autographs. This pack was full of base cards. And the mini: 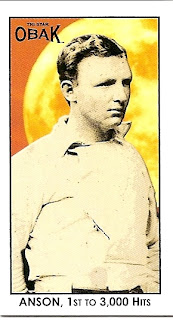 Even with a bunch of (really) old players and no parallels, I can use the mini and Barnes for the Cardboard Zoo. Plus, Pop Lloyd and Jack Chesbro are needed for my awards/leaders collection. 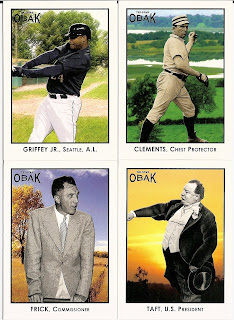 And now, a modern player! Griffey's going right for the PC. Commissioner Frick is needed for the HOF part of my awards/leaders collection. I could do without the 300+ pound president Humpty Dumpty. Clements is famous for being the first catcher to wear a chest protector. Which means he's a wimp. That would be like a major league shortstop wearing one of those softball face masks. I'm not going to debate girls using them, since they're closer to home plate and thus have less time to react. 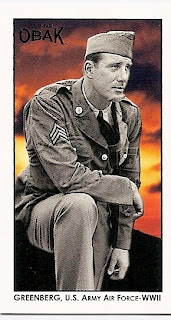 And Hank Greenberg for the mini, the only baseball player in the pack not wearing a baseball uniform. I need this card for the awards/leaders collection.

Review: These are the first two packs of Obak I've opened, ever. I've been interested in busting a box in the past, but it never materialized. I like the backgrounds behind the players. They feel surreal and sometimes alien, especially with the black-and-white photo placed over the color backgrounds. Thanks to the use of retired players, especially pre-war stars, I'm finding much more value per pack than active-player sets. Seven of the ten cards are headed to my various collections, which is much better than Topps Chrome (two were kept from the rack pack; an additional four could have been kept if the product was brand new to me - 6 out of 15 cards had possible places in my stacks).

The use of unique backgrounds, older lesser-used subjects, and baseball history in the product means there is a lot to enjoy. As usual with TriStar, there are no real inserts to collect, so autographs and parallels are the only chase cards.
at 12:30 PM