Getting Stoned with Greg Maddux

I'm not sure what came over me yesterday. A sense of childlike giddiness? Is that a word? But it was fun.
But I'm here to tell you, there's something else. A somewhat-normal post. I don't have anything great for you today other than some recent arrivals. There is some awesomeness in this post, though! 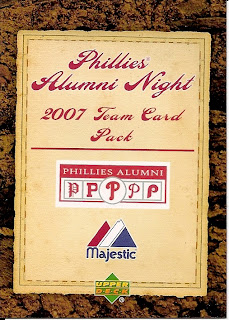 That's right! A team card pack! But no team card pack would be complete without some sort of advertisement. Since this is sponsored by Majestic, how about a deal at the Majestic Clubhouse Store? 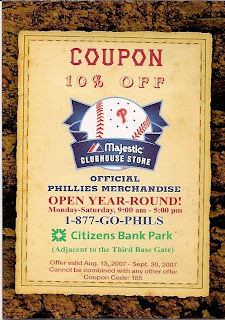 Too bad it expired nearly four years ago. On to the cards!
The base design: 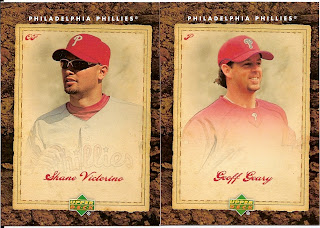 If you don't recall my obsession with Geoff Geary from a couple months ago, his appearance in this set was the whole reason for buying it. I'll get to add a couple cards to the Cardboard Zoo while I'm at it. Does the design look familiar? Yeah. Recycling the same year's Artifacts design.

Here's the card back: 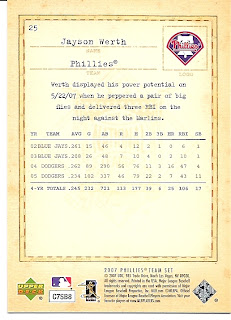 At least the set is identified properly on the back. 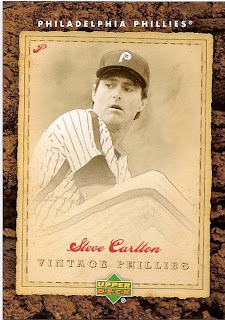 What's this? Vintage Phillies? It's part of a 10-card insert set, added one per pack. There are autographed cards inserted randomly as well. I didn't luck into any of those.

This is one of those sets that doesn't appear in a database, and without chancing upon it you wouldn't know it exists. It's great to have this set, because it's two more cards towards the Zoo, and one more for the Geary Collection.

A few cards from the weekend:

I believe Fleer did a Headliners insert set that looked very much like this. It's an attractive design. Too bad these are unlicensed cards from the early '90s. They have a bit of a curl to them, like Chrome, except backwards. 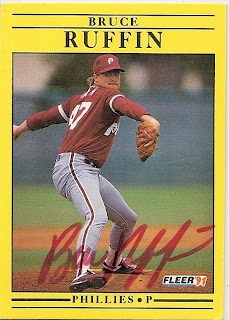 Bruce Ruffin had a great rookie year, and not much else. His son Chance just had his MLB debut this July. 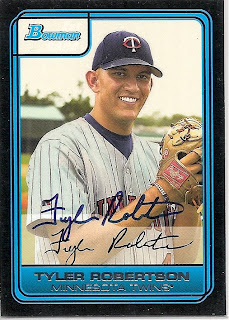 Tyler Robertson was promising around 2008, but has slipped lately. He worked completely in relief, mainly as a closer with AA New Britain this year, managing to earn a 10-3 record with 16 saves.

Both of these (supposedly) signed cards are available for trade. I don't want much at all. Really, I'm easy. I can't guarantee their authenticity, but it is my belief that the autographs are authentic. The same goes for the 2007 Phillies set - I'm keeping the Carlton, Geary, and one other card (who it is doesn't matter to me), but if there's anyone else from the 2007 Phillies you're interested in, let me know. I'll even trade the whole team away for a few nice cards in return.

Now for the grand finale, this card from the start of the post: 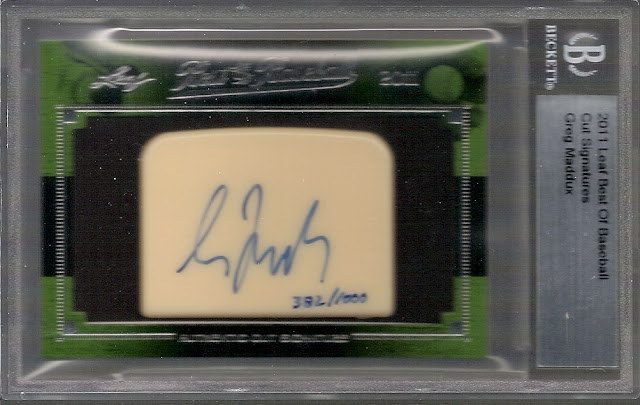 Why is this blurry? Because the case it's in is literally as big as an iPhone, and my scanner can't focus beyond the glass. It's one of those Leaf Best of Baseball "cut signature" cards. The cut signature isn't cut from anything. It's a piece of wall tile glued to a baseball card. Everyone's calling it a stone (hence the post title) but it really is like a tile sample. I knew what I was getting going in, so I'm not really complaining, but I have to be honest - I'd much more prefer a fake cut autograph on a piece of paper, or an on-card signature. But beggars can't be choosers, so this is a great autograph to add to my collection. Maybe in a few years I can upgrade it to something less massive.
at 12:30 PM