After a perpetually empty mailbox for the last forever or so (I think it's been a full two weeks since I received a card in the mail), several packages were waiting for me when I returned home Thursday evening. You saw one of them earlier today (the trade with Ryan L). Here are several arrivals that came from non-trades: 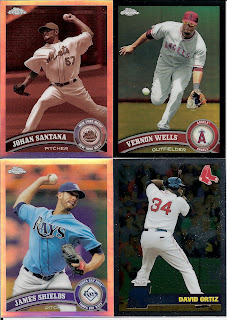 The above four cards are Chrome inserts headed for the type collection. They all came from Derek's auctions. Yes, Tomahawk Chopping Derek. The card below was also purchased from him, but it's headed to my Markakis collection. 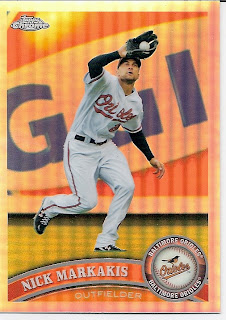 Next, an autograph for my women in sports collection - Britty Lun. Or Brittany Lincicome if you spell her name differently from her signature. 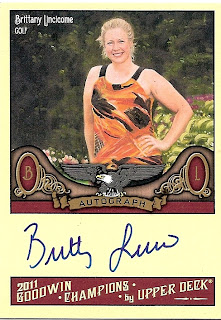 Last, my results from Colbey's Marquee break. He opened three boxes of four packs each - 12 hits total. I was the first one to buy in and chose the Dodgers. I figured I might get a nice relic, or an autograph of Kershaw or Kemp, or maybe even get a Koufax autograph. Here are the base cards I got: 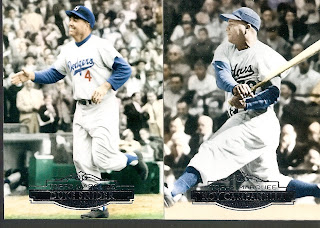 And here are the hits from the Dodgers: 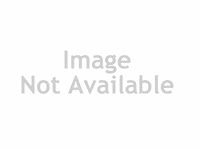 Yeah, zip. Zero. Zilch. Nada. Not even a blue parallel.

But with every purchased team, there was one additional team. By random draw, I was assigned the Kansas City Royals. You know, one of the least popular teams (at least it wasn't most-hated). A team with no base cards in the set. A team with maybe four total hits in the entire checklist. I tried and tried to trade the team away for a better chance with parallels - I figured I'd get a hit with the Dodgers. But nobody wanted it, and why would they? It was probably the weakest team in the entire set.

No base cards, of course, and thus no parallels. But this came out of an early pack: 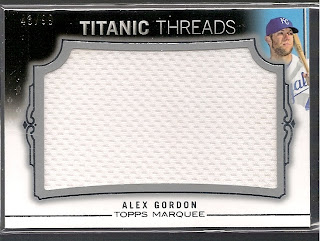 And I started laughing. The under-under-underdogs won one. This isn't a bad card, even though it's a giant patch of white.

Of course, I was still hoping for a Dodgers hit, which by now you know never came. But the Royals weren't done yet. They still had one more trick up their sleeve. 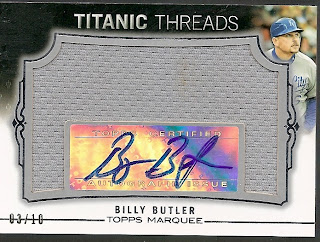 Yes, it's an autographed relic card numbered out of 10. You'd think with the card being numbered out of 10, they could put a bit of patch on there, but beggars can't be choosers. There's something going on in the upper edge, like glue residue or something. I was able to work some very careful magic and clean it up, yay! Funny, both hits come from the same set. At least it's two different players with two different versions.

Pulling two hits from the break was twice what I expected - pulling two Royals hits made this an awesome break! Thanks for the fun, Colbey!
at 3:00 PM