Mailbag: something I've been hunting for a while...

Last week was a big week for eBay wins. I think I'm waiting on somewhere between 40-50 cards. That usually means I get at least one envelope every day, but yesterday there was nothing for me. That wasn't the case today.

There were three envelopes in the box waiting for me when I pulled in the driveway from a quick run to the store. So what did I get? 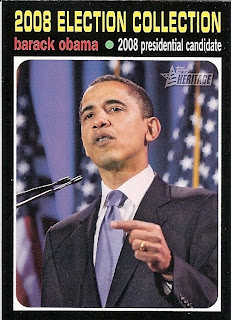 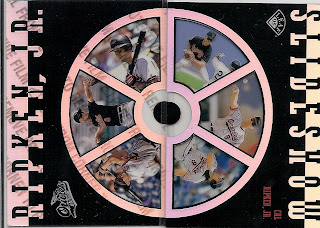 Next, two 1995 Leaf Slideshow cards - both of the Ripkens. The '94s (featured here) looked like slides mounted into the card. These look more like those old viewfinder wheels, but in a modern clean style. And with the arrival of these cards, there are only two left in the set I need: cards 6B and 7B! 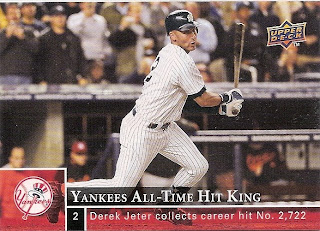 Last, one of the 2009 Upper Deck SPs. Someone listed the Derek Jeter Yankees All-Time Hit King card in a small lot and I ended up winning. Also included in the package were his base cards from '09 Upper Deck Icons and 2007 Topps Update/Highlights (with Posada and A-Rod), and X-Ponential3 insert from 2009 Upper Deck X. All three of those cards are available for trade. As for the Upper Deck SPs, I now need 8 of the 32 issued - Tommy Franks, George W Bush (both First Pitch) and Tom Seaver (HOF) from 2004; Buehrle (perfect game) and Obama/Pujols (All-Star Game) from 2009; and Rose ATHK, Yankees, and Joe Jackson from 2010.

That's it for today's mail. While I was out I checked to see if Heritage had arrived in my local Target. It hadn't. I did pick up some Opening Day (all I should need to buy for the year, actually), and a bit more that you'll find out about next week!
at 5:37 PM