New pages and a stack of mail!

First, I want to let all you tons of people out there desperate for my 2009 Upper Deck page that it's posted. Okay, so that may only be a couple of you, but look at the list for some trade bait. And I still need help finishing my 2011 Topps Series 1 set.

Also, I posted a page listing players I need single cards of for my awards/leaders collection. Looking to find something you can offer me in a trade? Easy! Just find a card for a player off that list! I'm not picky about what set the card is from (10 1987 Topps Barry Bonds?!) as long as the player is by himself (no Diamond Duos or anything). I'm not too interested in relics or autographs for that collection though. I do have a page of autographs I'm looking for.

Funny thing is, I'm making this post now, but I'll be reworking some of the pages, since I can only have a total of 10 unique pages. I think I'll work individual set lists into posts? Or maybe just one page. I'm not sure.

Soon-to-be-fun news: I've got a couple boxes on the way, and I'm looking at doing a fairly cheap group break. I'll have retail boxes of 2010 Topps, 2010 Topps Update, and 2010 National Chicle, so there's a slim possibility for hits, and plenty of strange inserts. I think we're looking at a maximum of $10 for the first team and $8 each additional, which I think is pretty good for three boxes from last year. There should be a good show next weekend and if I can find something decent with a couple hits I might grab that and add it to the stack (which might add a few more bucks to the total, or not). Maybe a 2010 Upper Deck hobby box?

Last piece of news: I have a 2011 Opening Day blaster that I'll be opening tomorow. Many of the cards will be for trade! And I have some repackaged packs for later in the week, especially if I can't find any Heritage.

Anyway, on to the eBay mail!

I've had family in town all week, and when they come it can be exhausting. I slept in until noon today, and for the first time since moving to California, the mail was here before I was awake. I found two boxes on the porch to add to the small stack from the past few days.

First, my 1998 Upper Deck set is finished with the arrival of a complete series 1 set. I also picked up (from a different seller) the 2003 Update set. Sure, these things aren't valuable, but I found a good deal. 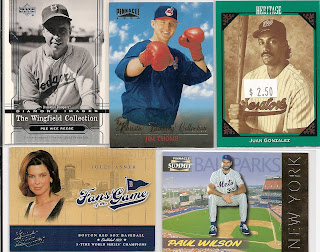 Some other minor inserts were bundled with the Update set - a Pee Wee Reese Wingfield Collection card from 2004 Upper Deck, a Ballparks card from 1996 Summit (Paul Wilson is a gigantic man sitting on top of a tiny right-center field wall and he's almost stepping on the third baseman!), a 1993 Studio Heritage insert of Juan Gonzalez, Jim Thome on a Christie Brinkley Collection card (I love this insert set), and the jewel of the group, a Jules Asner Fans of the Game card from 2004 Leather and Lumber. I loved watching E!'s Wild On when she was host. She has pretty much fallen from the face of the earth since the release of this card. I still wouldn't mind having an autographed version though. 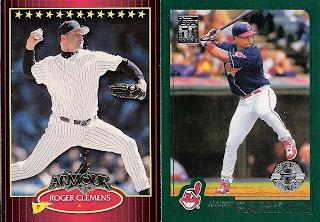 Next was a stack of 60 Years of Topps cards. The seller threw in an '08 Heritage Bryan Lahair, '09 Heritage Joe Nathan, '09 UD 1st Edition Yunel Escobar, '08 UD Buddy Carlyle, and an airbrushed 2001 Armour Stars card of Roger Clemens for free! I don't have much use for the Heritage and UD cards, but the Armour card will fit into my big collection! 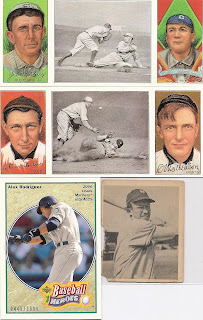 Next, one of the elusive UD Authentics Baseball Heroes cards of A-Rod. These things are usually overpriced for a set of which there are nearly 2000 issued of each card. I need several Griffeys and A-Rods and all the Ichiros. Slowwwww going. I also found two of the last three inserts from the 1993 UD All-Time Heroes set, and picked up my first 1948 Bowman card. Okay, the border is chewed away on the lower left side and the set itself isn't spectacular, but it's the first Bowman set, the first post-war set from a major manufacturer, and it's relatively easy to complete at only 48 cards. I'm not concerned with condition and I'm going to try to put this set together as cheaply as possible - this card cost me about a buck.Yogi and Stan will be tough to afford but the rest are possible over time. (Please don't give me an argument on how there were other sets made before '48 but after the war, and how the '49 Bowman and Leaf sets are the first real, major post-war sets - I picked this one for value reasons, and hey, it's the first post-war set listed in Beckett, so it works for me.) Oh, and Bill Rigney was born nearby in Alameda! On my birthday (59 years before I was)!