Saturday was kind of a disappointment. I went to a mall card show to hopefully scour the dime, quarter, and fifty-cent boxes for fun and profit. Well, fun, and trade bait. I did find some stuff for both categories, and I'll get to that on Tuesday. But it was a nice afternoon when the mailman delivered a nice large envelope full of cards from Colbey at Cardboard Collections with my results from the break and a trade.
I'll start with the break. I picked the Giants and the Mariners - I was hoping to pull some nice Bonds and Griffey cards. If it was just Bonds, I would have probably gone with a different team, but I have been a Giants fan since I started collecting. I'm not going to show everything - there's like 250 cards in the stacks he sent, you'd be bored by seeing 15 scans of cards just because, and I plan on showing some of them later some time because they just are that cool and I want to devote a whole post to them. Oh, and if you didn't know already, I love mid-90's stuff - inserts and subsets were relatively fun and interesting. I'm not really showing them here, just a few of the highlights.
First, the Mariners. 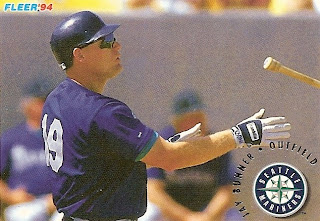 Jay Buhner, 1994 Fleer. Did he just hit a home run? Is he tossing his bat away or did it get loose? Is he trying to recreate the Carlton Fisk wave? And by the way, I love the shades, Jay. So cool. 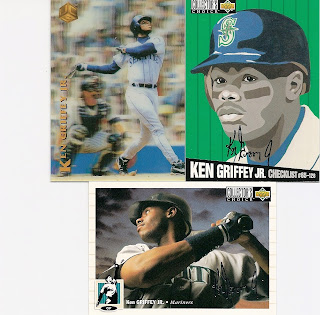 Some of the Griffey Jr. love. I like the UC3 set, even though it was a failed concept. I like 3D cards in general. And you gotta love the Silver Signatures from '94 Collector's Choice. Especially that photo of Griffey for his regular card. Griffey gets no love on the card value front but he started playing when I started collecting and he was the biggest thing as my interest in the hobby was in its adolescence. There were plenty of other Mariners in the group, but I'll get to them some other time!
Now, the Giants. Back when they played in the the 'Stick. Where I saw my first game, where my first World Series was played (no, I have never been to a World Series game), and when I was more Braves than Giants. I became a Braves fan pretty quickly upon moving to Atlanta, though the Giants stayed with me, and now that I'm living in San Francisco I'm back in Giants mode. (Hey, at least that means you might have someone to buy in for the Giants in your breaks more frequently!) Anyway, just a taste of what I received: 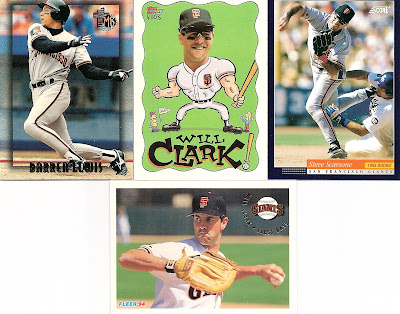 I chose a little bit more variety in this scan. I like Topps Embossed, although it was another failed concept. Actually kind of a gimmick. Gimmicks have been the thing since the 1980s, if you think about it, with all those released theme sets (1982 K-Mart?) and the start of inserts (Glossy All-Stars), but the release explosion of the 1990s definitely took it to a new level. Topps had several failures in the mid-'90s, but that's a whole other post. Anyway, next to Darren Lewis falling over is Will Clark in a Topps Kids release. I kind of like this set for the cartoons.I included one of the 1994 Score cards - I had a few survive with minor damage from the bad box. And I know now to buy any 1990s Score/Pinnacle products with extreme caution. I wonder if my '94 Scores are all stuck together. I chose that card of rookie Steve Scarsone because if you look closely enough, Tim Wallach (I think) of the Dodgers is sliding in to second, quite violently (he is literally grabbing at Scarsone's pants) and he's getting it back doubly hard (Scarsone appears to be kicking Wallach in the face). And for the last card there - the Will Clark shot - that's just a great picture, and in my mind a great pose for an art card (like National Chicle). I wonder if Topps will drop the throwback idea and just release a nice artist set for the sake of being art, like Diamond Kings was.
Now, the trade. We're almost done! I sent Colbey a group of 2011 Topps base and inserts, and he sent a bunch of stuff in return. 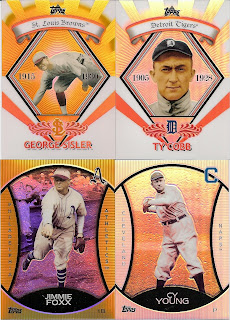 One of the most expensive things for me to get are the exclusive inserts from stores like Target and Wal-Mart. I either have to buy a blaster, hanging pack, etc from the store, or I have to find it on eBay, and I end up paying half the price of the pack for just this card. So it was great to get these. 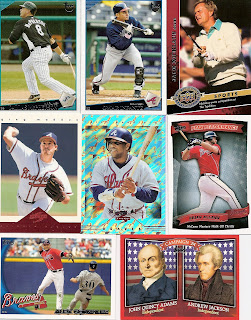 Colbey also included some odd-and-end cards I needed, and a decent selection of Braves cards. In fact, I think there might have been a full team set of those red Score cards! There were more than what's shown here, I just wanted to keep this post under 500GB, you know? 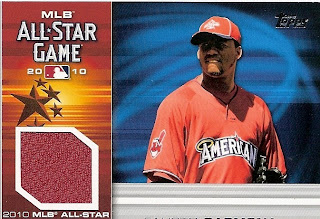 The piece de resistance. Or however that's spelled. He included a relic from 2010 Topps Update! My scanner chopped off the bottom of the image. I feel like a tech newb.

To sum up this long post, I loved the break. This was the first break I joined and the only one to be completed so far. (I'm part of The Other World's break next week and the two Gypsy Queen breaks.) This is going to have to be a monthly thing for me! And thanks a ton, Colbey, for the trade! I'm going to have to find something to even us up!
at 2:41 PM