I've decided that I'm going to split this box into four posts - one per stack of packs in the box. Let's start in the upper left corner. I'll list base cards from back to front in the pack (if you care), then the inserts. Cards in red are available for trade! Cards in black went to finish sets, cards in blue went to the awards and leaders collection.

Each pack contains 20 cards. I'm supposed to pull two memorabilia cards and one autograph per box. Besides looking for base cards to finish my set, I'm working towards that 20th Anniversary Retrospective set (I've got 239 cards now). I'm also looking for the Historic Firsts and Historic Predictors inserts.

Pack one.
Base: 346 Adam Kennedy, 363 Carlos Pena (holding his Silver Slugger award), 312 Jake Peavy, 397 Wily Mo Pena, 274 Chien-Ming Wang, 257 Billy Wagner, 223 Jeff Suppan, 206 Chin-Lung Hu, 492 Grady Sizemore TC, 461 Carlos Zambrano, 436 Cardinals Team Leaders, 197 Jeff Kent, 134 Jeremy Bonderman, 176 Joakim Soria, 113 Jeff Baker, 50 Julio Lugo, 99 Johnny Cueto, 36 Daniel Cabrera.
Inserts: Historic Firsts Predictors: College Football Adopts Playoff System, 20th Anniversary #389 Mike Bossy
Notes: How did it end up that all the cards I needed for my set were in one half of the pack, and the ones I didn't were at the front? I sense a trend. I could use two of the duplicates for my awards collection. And I only have three of the ten cards in the Predictors set, but I pulled one of them in my first pack. 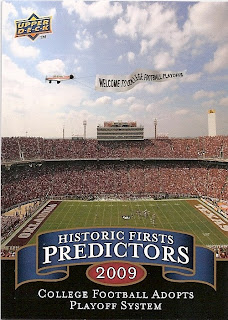 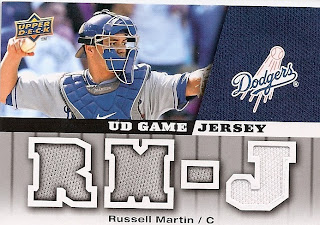 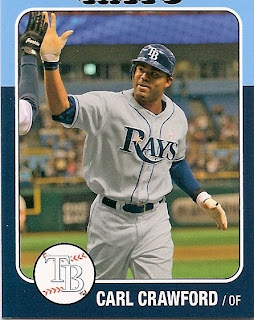 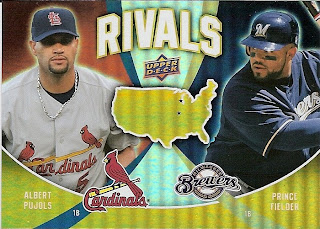