I bought this box last week while looking for some Heritage. By now, everybody's seen the cards, I'm sure, but I thought I'd share what I'm pulling. I'm going to revamp my "for trade" pages - put all the cards together in better groups. And I'll put these there as well. Anyway, most of these cards are going to be available - if I highlighted it in red I kept it this time. So without further delay... 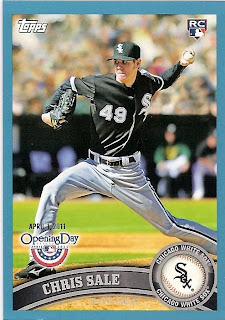 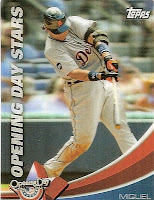 Pack 11:
Thoughts:
Of course, the base cards look the same as the regular Topps issue, so they look fine. Did the regular issue have the position printed below the player's name? I'm not sure. I like the blue parallels. They have a nice light sparkle to them and they're not gaudy. The ToppsTown inserts look exactly the same as the regular issue as well. The mascots look exactly the same as the base cards, but with the foil "April 1, 2011" over the Opening Day logo like the blue parallels. Why is the White Sox mascot card not called Southpaw? The back of the card calls him Southpaw, but the front just has the team name. I like the idea of the Spot the Error set, even if it is easy. The design reminds me of a 1990s Stadium Club insert set. The Superstar Celebrations cards look patriotic but being horizontal with wide top and bottom borders they look like a widevision image. The Stadium Lights set looks nice, even if all the pictures I've seen don't appear to be action shots. Opening Day Stars are nice 3D looking things, and the Presidential First Pitch are nicely designed as well.
I should note that I've seen two different Opening Day Stars sets. The Opening Day Stars set comes in a non-3D version (I haven't looked at the checklists to see if they're different).
at 2:33 PM