The most intriguing teaser from 2011 Allen and Ginter is this image: 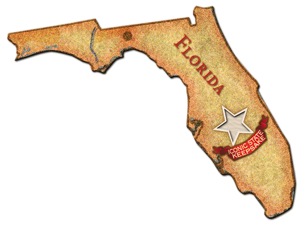 These are promised to be oversized box loaders with "iconic state keepsake" relics. Numbered only to 50, putting a set together will be tough but should prove to be fun. It would probably damage the cards, but imagine this set framed on your wall instead of a regular map of the United States, each state providing a piece of heritage from the state. I do have to wonder - will the pieces be sized appropriately? Alaska is huge, and Rhode Island is tiny. The sell sheet says they're just die-cut. So I guess I won't be able to rebuild the United States, one A&G at a time.

But I digress. What if I were in charge of deciding what relic to slice up for each state? Well, in alphabetical order, here we go: