Finally, the end. I don't promise any exciting finishes, here - but on with the list: the last 10 states and the relics I would associate with them if I were making the Allen and Ginter box loader set: 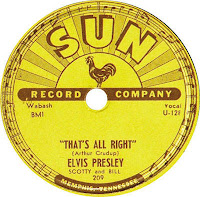 SOUTH DAKOTA - While other states have had bigger ones, South Dakota was home to the Black Hills gold rush. This card will contain flakes of real gold.
TENNESSEE - In honor of Elvis Presley, the center label part of one of his records is embedded on every card.
TEXAS - Steers and ... oil. That's what Texas brings to America. So both of those will be included in this dual relic card.
UTAH - The Great Salt Lake fills a large portion of this state, and every card will contain a piece of salt from Utah.
VERMONT - IBM is the largest for-profit employer in the state, and to recognize this, every card will contain a genuine IBM logo plate from an old computer. (I thought about putting maple syrup here, too.)
VIRGINIA - Continuing with the technology trend, Virginia exports a very large number of computer chips, one of which will be included in each card.
WASHINGTON - Again with the technology! Microsoft's headquarters is in Washington, so everyone will receive a Windows installation CD inserted in every card. Different variations will be available - including some original Windows on floppy discs. (Granted, they will need to be blanked - wouldn't want Microsoft to sue!)

WEST VIRGINIA - This is a recreational state, known for its caves and trout fishing. How cool would it be to mount a fish skeleton inside the card? (As part of the research for this article, I discovered that it can cost $250 or more to mount a fish skeleton!)
WISCONSIN - Wisconsin is known for beer and cheese. Since cheese doesn't last long in a trading card, we'll go with beer labels - since the set is limited to 50 of each card, it shouldn't be hard to have 50 different beer bottle labels from Wisconsin (current and present).
WYOMING - The last state (alphabetically) - I can't believe this is finally over. While researching this project, I learned that Wyoming receives about 6 million tourists a year - which didn't make sense until I remembered that Grand Teton and Yellowstone are in the northwestern corner of the state. I was a tourist in Wyoming for a day, actually - I stopped at the state museum in Cheyenne and two historic prisons along I-80 on the way from Denver to Salt Lake City. Anyway, this is Topps' diamond year, and mining is the main industry in Wyoming, so why not include a small diamond in this state's cards?

Well, that's it. Not surprising to me, overall this series of posts took several hours to write and a good bit of research. But it's fun creating a project such as this. Eventually I plan on creating my own cards - I may have to carry this concept on to a set of my own!
at 2:57 PM