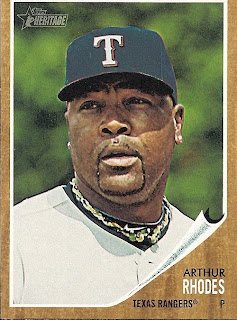 Okay, so there's a little bit of a (slightly boring) story here. If you're not interested, skip on down a couple paragraphs. I will post cards available for trade on the trade bait page.

Still with me for the story? You're the only one! I set out Sunday afternoon with three goals in mind. First, to drop off some old stuff at the Salvation Army. Second, find some retail 2011 Heritage in blaster or hanging form. Third, buy earthquake supplies.

The first task was easy, and set me up for a looping path where I could check three Target stores within five miles of each other. The idea was to check each store for the Heritage, and buy my earthquake stuff at that store. Well, I should have known better, and I did. This is the San Francisco bay area, and everybody goes out on the weekend to do shopping and leisure activities. But I still was on a mission, since I was out. The recent rains flooded the ramp from one freeway to another, meaning I had to take a detour. And my detour required another detour due to traffic caused by utility work. Arriving at the first Target (in a mall), it took me about three minutes to search and verify there were no packs I was looking for. I found some regular retail packs scattered in the wrong boxes but passed. On to the next Target, located in a different mall. This one can have insane traffic, and today was the worst I'd ever seen. It took me about 15 minutes to get to a parking space, and I didn't go up and down a bunch of aisles to find a close one. Finally, I got to the tiny card space in this one, and they had nothing. No 2011 Topps, no Opening Day, nothing. There were some non-baseball boxes, but pickings were slim, and I don't do other sports. Argh! Back to the car. The third Target is across the freeway, but requires fighting traffic again. I know a good back route over, but I cursed all BMW drivers along the way as two of them cut me off within two minutes, failing to yield at two different stop signs. I pulled in, found the first spot I could, took a deep breath, grabbed a cart, and headed to the third card stash of the day. I saw an empty Heritage gravity feed and a good bit of 2011 Topps packs and hanging packs, but it looked like I was out of luck. Oh, but what's this? Finally! Third time's the charm! Blister packs with three packs and three black parallels each! There were about five on the peg, and I grabbed two. And then, for the next hour and a half, went up and down the aisles grabbing canned goods and supplies to replace the old earthquake kit. I was pretty happy finding what I was looking for and tired from all that shopping, and I hope you appreciate the great amount of effort I went to for this post!

And now, what did I find?

Two three-packs. Each pack has 9 cards, and each three-pack has three black parallels.

Box one, pack one: 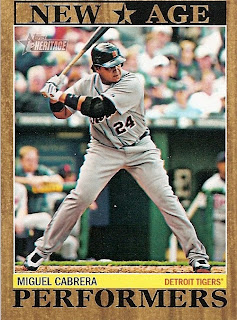 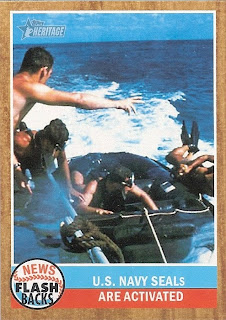 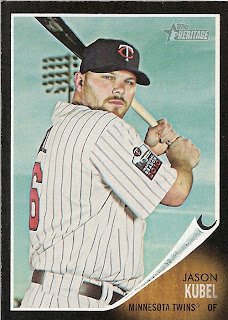 Nothing special. A couple inserts. No tints or chromes, and a MGR SP.
Box two, pack one:
Pack two: 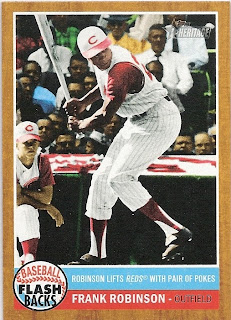 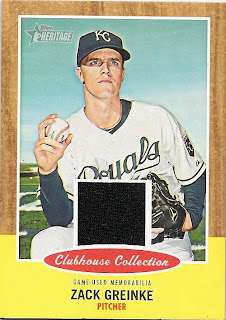 Black Parallels:
Well, that's more like it! A hit! It's the easiest hit to get, but I'll take it. And as expected another SP, and another insert.
I'm not sure I like the black parallels, but I think they might grow on me. I'm not putting together any of this set but I will be keeping some of the cards for parts of my collection. I've never been too big a fan of the Heritage line as far as set collecting for me. And while I understand the SP concept, I think they should do it right - make the set the same number of cards as the original, and do SPs the same basic rate as the original (so this set would have 587 cards, and 371-446 would be minor SPs, 447-522 SPs, 523-589 super SPs, etc. And be completely true to the set you're honoring - put all the subsets in the same number in the same location. I like the Heritage idea and don't knock anyone who enjoys collecting it - it's just not my cup of tea.
I do like that wood grain look, though.
at 3:30 PM