A Costly Question on Autographs 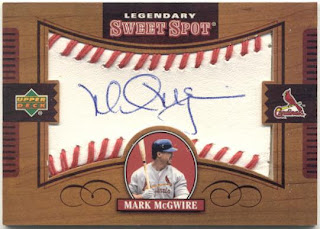 My personal collection, on the baseball side, is a bunch of autographed cards - some are in-person, but most are releases from sets. It focuses on a few teams that mean something to me and a couple accomplishments. Occasionally I browse eBay looking for deals on the autographs I want but don't have, and with the new season and (almost) new location, I've been looking a lot lately. One of the people on my list is Mark McGwire, and he will probably remain on the want list for a long time. At the time of this writing, this card is at about $120 with time remaining. He's not worth $100+ to me. 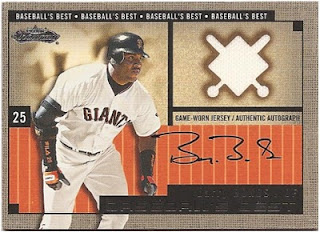 Not on my list, but not for reasons you think, is Barry Bonds. After seeing the prices on McGwire autographs, I decided to look up Barry. For someone in the news a lot, he's not going for very much. This card sold for over $100, but several of his certified autographs are going for $50-75.

So my first question is, why? Both of them have used steroids/performance enhancing drugs, and admitted it (though Bonds says he didn't know it). Bonds is a bigger name and has more accomplishments than McGwire. The only answer I can figure is supply - it looks like McGwire's cards are in shorter supply.

Now on to another autograph subject, while I'm on the topic. When I was in Georgia, there weren't big shows like the TriStar shows with autograph guests. Occasionally one of the shows would have someone like Clete Boyer or another former Brave. At those shows, autographs would cost a few bucks at most. Now that I'm here, I see flyers for these supershows and autograph prices, and they aren't cheap. Matt Cain is signing at a card store here in a week or so, and the autograph fee is $90. $90! You can get a certified autograph on eBay for $10-25. Is the thrill of meeting Matt Cain worth $80? What do you tell your 10-year-old Giants fan when he wants to go? Sorry, bud, but your hero costs too much. I've heard the argument - "Why should I charge $10 for my autograph so some dealer can get his stuff signed and sell it for $100 or more?" But come on, it's fricken Matt Cain. Or Jonathan Sanchez (who, coincidentally, doesn't have a single autograph card - he's got a couple Co-Signers with other players). Or Will Clark. Sure, Clark is a local hero, but pretty much nobody outside of San Francisco cares about Will Clark. Why? Why is it so expensive? Nolan Ryan, Albert Pujols, A-Rod have all signed a ton of cards and their autographs go for a lot, so they should rightfully charge a good bit for an in-person signature, but $90 for Matt Cain? Really? So if I decide I don't want it anymore I can't get anyone to buy it from me since I don't have proof it's authentic unless I spend another $50 or more for the service? After waiting in line for an hour to get his autograph? Just so I can see him sign it for five seconds?

I'll just get his certified autograph off eBay for $10 and save the hassle.

And one last question, this one actually serious - for all you TTM people, where do you get your autographs? I'm assuming current players are sent through the club. Ever had any luck at sending ahead to a stadium they are heading to? (Have all these questions been answered on some other forum or website I'm missing?)
at 10:52 PM