First, I'm gonna say thank you, yet again, to Dominic for sending me so many great cards. (And, thank you to everyone so far who has traded with me to date.) 129 cards, all needed to finish sets or my single-card samples for the 2009 Upper Deck release. You've seen some of the 126 I am not showing today - base cards, USA cards, insert cards, crazy-super-large-2500-card-set cards, buyback cards, and now, a few hits in the bag: 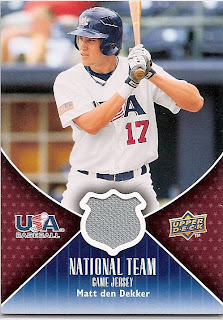 All the hits are Team USA cards. I'm not entirely sure what I'm going to do with these three - I could actually collect the jersey set now that I have a good start. You see Matt den Dekker and Mike Leake above and below, respectively. Matt posted on his Twitter account that he's starting this season in the Hi-A Florida State League - he was drafted last year by the Mets. 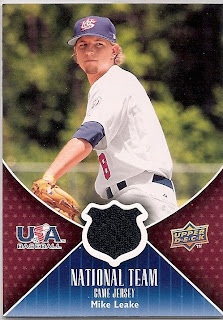 Mike Leake went straight from the draft to the majors with the Reds last year - the first time someone's done that since 2000, and went 8-4 with a 4.23 ERA in 24 games before injury. He's supposed to have had his season debut yesterday. I don't know what the results are since I wrote this post Monday night. Oops! 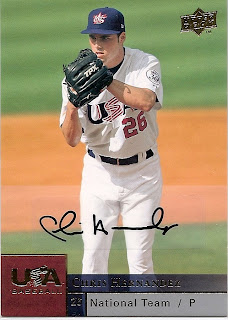 Last, this autographed card of Chris Hernandez. He signed with Boston last year, after doing well for Miami as a junior. He only pitched two innings for Lowell last year. It looks like he's playing for the Salem Red Sox this year.
Now, you've seen everything he sent. 129 cards - most of them inserts, with two jerseys and an autograph! A great package to open.
So, what did I send to Dominic in return for all these fantastic cards? Absolutely nothing! Yet. This was one of those player-to-be-named-later trades. Which is why I titled this half-a-mega-trade. We're only halfway done. He's a Reds fan - I guess he's not a Leake fan! I'll have to find him some really good stuff for all this awesomeness. So, again, thanks to Dominic!
This is not the end, by the way. I have a small back-log of pack busts, eBay grabs, and two more trades (including one even bigger than this) to tell you about. All in due time, though!
at 2:10 PM