One down, four to go! This post focuses on the USA Baseball cards that Dominic of Buckeye State Cards sent as part of a 129-card trade! If you are legally required to inform people about Megan's Law, you may want to skip this post, since there are a lot of 18U players in this lot!

Not in the 18U team, but apparently not doing much in the National Team games, is Hunter Morris. Otherwise, why is the best picture you have of him is when he's leaning on the outfield wall?

Maybe he's throwing the ball at a bird flying in the sky. Why else would he be looking up like that?

That's an ugly goat you got there on your chin. 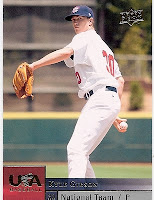 It amazes me when pitchers look like they're not really trying. (Contrast this with the Kuroda card on the last post.) Now, trading card pictures could all be from warm-ups or photo shoots, but I was at a minor-league game a few years ago where the pitcher seemed to be throwing BP. I have video and sometime I might just post it.

If you want to teach your kids fundamentals, don't show them this card. The video of this play may be better, but I see a glove pointed the wrong way and a fielder not in front of the ball, flat-footed and apparently off balance.

Now, see, he's trying. You can see it in his face. Too bad he's throwing in the bullpen.

Jacob Turner is trying, too, and he gets to pitch on the mound!

GRR! Tiger! Pitching in the bullpen! You think we don't notice the white lines and squared-off mound?

If Upper Deck was to do USA Heritage, this photo would work. He's standing in front of a concrete wall with water stains!

With hair like that, he could make the Giants. But he'd have to dye it red first, perhaps.

And that finishes the 2009 USA inserts from Upper Deck. Next post, I'll look at some of the 20th Anniversary cards Dominic sent! And thank you again, Dominic!
at 11:05 AM