Wow. So many cards. I mean, really, a lot of cards were in that box Ted of Crinkly Wrappers sent in exchange for one measly little Zeenuts card. This is just a taste of the large handful of Topps cards he sent:

The oldest card Ted sent me was this 1975 Gorman Thomas card. I kind of like the colorful design of the set, kind of an homage to the hippie love of the late '60s. 1979 wasn't a bad design either. I like the old Topps logo.

John Smoltz... someone just posted that they need this card. The 1989 set is near and dear to my heart - it was the first pack of cards I remember ever opening. I was an A's and Giants fan then (Atlanta was a world away) so I wouldn't have thought twice about this card. And while many people don't like the 1990 set, I do. It defines the '80s, and while the colors don't match team colors (what's a Padre blue?) it's a decent modern design.

Topps celebrates its anniversary every year, it seems. Why do I like Topps from 1989-1992 so much? This is a pretty good simple design, ain't nothing wrong with that! I just realized that 1995 card is a ToppsGold. I was a winner in 1992 with those scratchoffs. At least Topps was smart enough to stick the Winner stamp on those cards to maintain the integrity of the regular Topps Gold inserts. I like the 1995 set design, because of the edges of the photos and the use of a handwritten-looking font. It feels more casual and fun, like baseball should be. Of course, Topps went digital with the Cyberstats concept, which kind of takes away from the theme.

I'm going to jump from this decent 1996 card - nothing really obscuring the photo except for a TV-graphic style nameplate at the bottom, to the 2009 release, which wasn't all that impressive to me. It isn't bad, it just feels like Upper Deck with a white border. In fact, so does the 1996 card.

I guess Topps realized they were getting blocky like Upper Deck and decided to go with curves the past couple of years. There's too much invasiveness with the curve in 2010, but the arcing nameplate with the circle baseball logo of 2011 really hits the spot.

Stadium Club was Topps' answer to Upper Deck - and just like Upper Deck's 1989 release, this one came in very slowly, driving prices through the roof. It featured full-bleed photography (I believe a first for major card manufacturers) and a simple, enjoyable design with gold foil highlighting. The basic design would remain similar through the 1993 release - gold foil lines with the same logo.

As you can see in the 1999 (left) and 1998 issues, the design was still simple and unobtrusive, even though the logo and foil color changed. You can see a change to more fluid, active design in these issues.

The 2008 issue was the last for Stadium Club, released after being gone for five years. It's a shame they played a big experiment, with confusing short print schemes throughout the set. I'd rather have a coherent Stadium Club set than Topps Chrome. Speaking of Chrome, there's the 2007 issue to the right. I like the refractors, but the regular Chrome sets just never impress me. 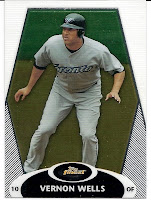 In 1993 Topps released Finest, the first ultra-premium brand. In fact, Finest and the regular Topps issues are the only baseball sets still being issued from that year. Beckett still values some of the '93 Finest Refractors as high as $500.

Topps Heritage - this still feels like a novelty concept to me, putting modern players on copies of older releases. However, Topps has a huge following on this line, and it's one of the best sets for set builders, and while it's not for me, I won't be the one calling for its end.

Topps has released several other brands over the years, including a few attempts at Bazooka, which seemed to always have at least one interesting insert to it - I liked the themed relics from the mid 2000s. And Topps '52 Style is another throwback set which focused on rookies. While the original 1952 set was groundbreaking, the design really isn't that great. I prefer the 1953 Topps issue over '52.

Gallery focused on "art" themes applied to the players, while using photographic images, for several years. Eventually they switched to actual art, and those are the years I collected. Another long-running painted set is Allen & Ginter. Ted sent one card each from '07-'10. 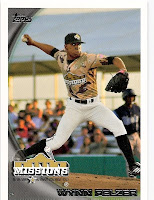 Total was a massive set. I think the idea was to give everyone who played a major league game the year before a card, an idea I think should be used in the base Topps set. Since Topps secured a minor league license, they've issued Pro Debut, which as you see is the same style as the regular release, with minor league team colors and logos. I wish they would put who the team is an affiliate of on the back - it says that Pelzer was drafted by the Padres, but what if he was traded before coming to the Missions? I'd have to actually check the affiliates online to figure out what teams I would like. While that's not hard to do, if I was at a card show flipping through singles I'd want a somewhat easy way of finding the team I follow.

I've talked about National Chicle a few times. I like the set. Everyone gave this set such a hard time because of the Ruth card - hey, Babe Ruth played for the Braves,  even if it was for part of a season at the end of his career. And the pose matches a Babe Ruth Exhibits card (although he was in a Yankees uniform). And a lot of people didn't like the set because of a lack of strong autographs, but several of the prospects have turned out okay so far. The art is interesting and matches several of the styles National Chicle used back in the 1930s. I'll actually miss this set this year.

Everyone knows the story of Bowman's demise, being bought out by Topps to create a monopoly. And of course, come 1989, Bowman returned. It had several problems - mainly, it wasn't attractive and didn't provide anything over what was already available (see the 1990 card to the left). Not to mention the 1989 set wasn't issued in a standard size. However, 1992 meant a better quality card with a focus on rookies, and a new monster was born. Bowman is still the home of the rookie card, although the parallel "Chrome" set tends to get the credit now.

Speaking of Chrome, here are the '08 and '09 issues. Bowman and Chrome keep the same basic design from year to year - it seems that they have a black border most of the time with a colored inner frame, and usually feature the player's autograph on the front. What I want to know is why Bowman is still released, if Chrome is so important. I'm glad see one of the two sets disappear (or make Chrome a parallel in the Bowman set, actually) - do the same for regular Topps - issue Chrome and Refractors as parallels like is done with Heritage.

Bowman Heritage was a run replicating the early Bowman sets. I'm trying, slowly, to complete the original 1948 set (patterned in the 2001 set to the left), even though it's a boring set. A black and white photo with a white border. Yawn. But it was the first post-war set, so it has significance.

I like this 2007 card. Can you guess why? Of course, it's a painted set! Or looks that way - it could be photoshopped.

I didn't even begin to show you all the cards Ted sent, giving a great view of the evolution of cards and card companies over the past thirty-plus years. My last post in this series will look at the main part of the trade, where it all got started. Stay tuned, batfans!
at 10:55 AM