Finally! The finale! Ted from Crinkly Wrappers sent a box loaded with cards from the '70s through today, which have been featured on my previous five posts. Yes, there were just that many cards, and it's been fun going through all those different releases. This, the final post in the series, looks at where the trade began.
-------
A long time ago, in a box far, far away (Connecticut), sat several cards I needed for my 2009 Upper Deck and 2011 Topps sets. A great Jedi named Ted searched out those cards with the force, using the baseball-bat-looking lightsaber to wield off dust bunnies and dinged corners. He has defeated the dark side of the box by sending me these and more:

Red glove. Strangely colored gloves can only be a sign of evil doings.

Most boringest card ever. Couldn't photoshop the new stadium in the background? Or maybe the White House or Capitol? Josh is over here with the A's now.

Speaking of, former A's pitcher Tim Hudson looking good in Atlanta. I was able to pick up his autograph a couple months ago fairly inexpensively at a LCS because he's no longer a bay area pitcher.

Ronny Cedeno can do the Jeter Leap for much less money.

Every time I hear the name Martin Prado, I think of the hispanic pool boy in Legally Blonde talking about shoes. 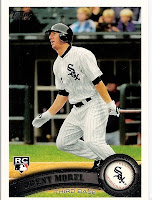 2011 Topps really does have great photography. I guess since Topps doesn't release Stadium Club or any other sets focusing on quality photography there are better images to be used for Topps. 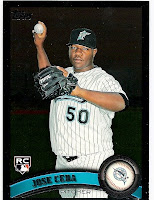 Wal-Mart black border. I don't think I've ever pulled a black border card when I would pick up cards from Wal-Mart. Is Jose Ceda threatening to throw the ball at the photographer? 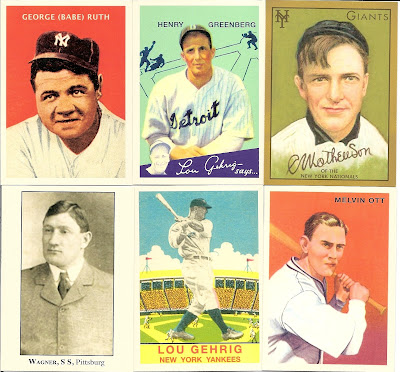 Ted included seven of the CMG reprints. Some people complained about the National Chicle release last year having cards with boring backgrounds, but the Ruth and Ott Goudey cards here have simple backgrounds, not to mention the Mathewson and Wagner with no real background to speak of.

Last, nine of the 60 Years of Topps cards. He sent 20 of them, if I can count right.
One last time I want to thank Ted for this awesome package! Hopefully we can do some business again! And I hope things get better for you.
at 2:57 PM