So many cards, so much to say! Now I'm going to look at the Score/Pinnacle brands cards Ted sent, and the few cards that came from a non-major manufacturer. 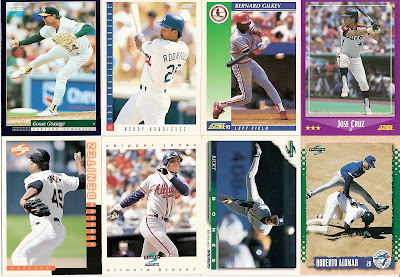 Score. I didn't scan these quite right - they go from right to left instead of left to right. I don't care for the first year or two of Score, it didn't provide anything other than another cheap card set. But starting in 1990, with the last 30 cards or so, they started including subsets. Dream Team, All-Stars, and other random stuff (remember the Bo Jackson black and white card?) were part of the base set. I have several of those subset cards in my This Card Is Cool collection, and eventually I will feature them here. Like many manufacturers in the 1990s, Score turned their subsets into inserts, and while some of the Score designs aren't bad (the Goose Gossage and Henry Rodriguez cards on the top, and Chipper, Bones, and Alomar on the bottom are decent designs), the sets never stood out and were always overproduced. In fact, Score, to me, defines Overproduction - 1988 Score will always be lower in my mind than 1988 Donruss, for instance. I don't think Score really ever brought anything quality to the hobby, which is probably why they went bankrupt in 1998.

Pinnacle was Score's answer to Upper Deck. The 1992 cards were glossy but unexciting. The double-fronted Team Pinnacle cards were a major hit though. I still have only a couple of them but I would like a full set. The 1993 set wasn't much better, but I like the look of 1994 (to the right).

Pinnacle kind of lost its edge and the 1995-1997 issues all looked about the same - lots of gold foil on the bottom taking up image space. Donruss - parallels. Fleer - inserts. Score - gold foil. However, the 1998 issue (right, too little, too late) was a nice design.

Score issued a few other sets in the 1990s - Select and Summit are shown here. Select was supposed to be a premium brand, but it never stood out. They even took it beyond Select, with Select Certified (really an answer to Leaf Limited and Topps Finest). Summit was just another set among the dozens released in the 1990s. 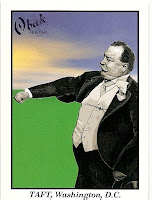 Obak is a throwback design from Tristar. I really like it but I never really buy any minor league stuff. Eventually I'll probably grab a set or try to put one together if boxes are cheap enough. This is one of three oddballs Ted sent.
Another oddball is Sportsflics, 1987 Bob Knepper shown. Sportsflics never really took off, though they made a small comeback in the '90s with a few releases. 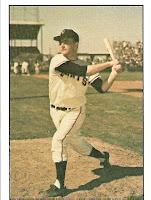 Last for today, is this 1979 TCMA 1950s card. I really like what TCMA did in the '70s and '80s, releasing cards of retired players in topical sets. Most of the cards look the same Foster Castleman played for the Giants in New York, where this picture was probably taken (anybody familiar with the Polo Grounds?), but was traded to the Orioles when the Giants came to SF.