Upper Deck could be the most hated card company out there right now. But you can't deny they brought about many innovations in card manufacturing still seen today. Here are some of the Upper Deck cards Ted of Crinkly Wrappers sent: 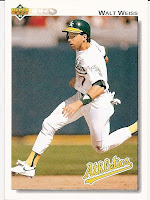 Of course, we start with 1989. I like this issue - it is a really nice design. The 1990 and 1991 designs weren't that exciting, but I like the 1992 design. Maybe it's the baseball fading into the picture from the logo, or the shadow design around the photo, or maybe it's because this was the first Upper Deck set I could finally afford to collect.

1994 wasn't that great for Upper Deck. Sure, they went full-bleed, but I don't like the design too much. They could have left out the squished black and white Chipper or put the team name over that picture. This is the first year that Upper Deck used a blocky, technology-oriented design. They would follow this formula through 2010. I do like the 2000 issue, though - a nice design. Notice the technology design concept - lines and dots.

2004 had too much going on around the player's name, position, jersey number, and team logo. There's some other photo used as a background there - in fact there's a scoreboard with a Budweiser advertisement on this one. 2006 wasn't spectacular, but left a lot of room to showcase the great photography. Both sets again feature blocked sections.

Now this 2008 card is pretty much perfect if you're showcasing great photography. Minimalist at its extreme - information given in foil right over the photo, except for the laser fading red light coming from the position "home plate" foil stamp. 2009 went back to a background around logos, positions, etc - a step backwards if you ask me.

The last Upper Deck issue was actually pretty nice. A font with some character and upper/lower case was used, you have a decent inset picture (instead of squished copy of the main photo), and the photo still rules the card. Again though, straight blocky sections, and fading lines return. 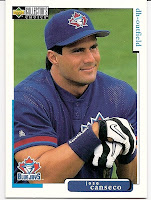 Collector's Choice was the backwards leap for Upper Deck, and I don't say that in a bad way. By the time Collectors Choice was released, Topps had Stadium Club, Donruss had Leaf, Fleer had Ultra, and Score had Pinnacle - every company had at least two sets, a basic brand and a premium brand. Upper Deck was already a premium release, so they put out Collector's Choice. I liked Collector's Choice - you still had interesting photography but at a cheaper price. Most of the designs weren't that great, but they weren't in-your-face intrusive like the late '80s Donruss and Score or 1991 Fleer. This 1998 design is actually pretty nice.

SP was Upper Deck's premium brand, basically as their version of Finest or Flair. The SP brand would evolve over the years, becoming SP Authentic and spawning SP Legendary Cuts. 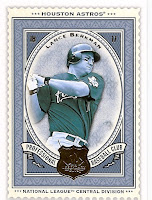 Legendary Cuts was all about cut signatures. However, they designed some fancy framing for the base cards and each year was pretty nice. This looks like a postage stamp, but it's still a decent design, if busy. Too bad there isn't any color to the photo.

Upper Deck dabbled in painted sets and I like both of these releases. Masterpieces is meant to look and feel like canvas paintings, and as far as I can tell, 2007 Masterpieces is far ahead of any other release yet on the number of parallels - I count 16, excluding plates. I think one of the Topps Chrome or Finest releases hit 11 one year, at most. They tend to hover around 7-8. Goodwin Champions is one of those love/hate sets, where baseball fans hate getting cards like this marathon runner but card collectors enjoy the true multi-sport branching. One thing's for sure, sets like Goodwin and Allen & Ginter bring certified autographs of many athletes who otherwise wouldn't have a card. When I returned to collecting in 2003 after a 5-year haitus, Ovation was one of the first base sets that really wowed me. I really liked the baseball stitching image and embossing. I had seen it before (let's not forget Topps Embossed) and I've never collected the set, but I still enjoy these cards. Some Sweet Spot base sets feature the same basic idea, which makes sense given the product's concept. I like the Sweet Spot signatures, as long as they aren't fading away.

When I saw that the Baseball Heroes sets were released as premium products, I was quite disappointed. I can't afford $30-50/pack stuff. But I've always enjoyed the Baseball Heroes inserts, and I'm on a quest to build a complete set from the original 1990 releases through 2010. The easy stuff is done. I just need the rest.
That's all I have to show for Upper Deck, though Ted included much, much more. I'll finish the brand roundup with the next part of this series - Topps! With 60 years of history, it will have a good bit of images. Until then, happy collecting!
at 2:54 PM