Oh, the puns. I was talking with my grandmother and said a pun at dinner last night, and she said I'm taking after my grandfather. You'll see what I mean in a minute.
This is a very busy week. On Sunday I head to LA for baseball and sightseeing. I'm excited, even though I've been to LA two and a half times in the past decade or so. There really is a lot to do there! I'll be seeing nine games in nine different parks, touring the two MLB stadiums, and racking up a pretty large number of miles (ugh, gas prices). The only LA-area baseball game I've seen in 20 years is the one above. I took that picture. Mets won, by the way. The series clincher. I was rooting for the Dodgers, just so you know - being a Braves fan I chose the Dodgers over the Mets.
This week is full of preparations for the trip and I have several activities going on in addition to packing. I'll have a temporary addition to the family when I return in the form of a feline, so there's preparations for that as well. And there's the A's game on Thursday. And I just picked up Rock Band 3 and I gotta tell you, those games have been quite a big part of my life in the past year. Plus, I seem to spend an hour or more every day writing and reading blogs. Anyway, what I'm getting at is - there are so many distractions for me, and I have a hard time concentrating, so if you're working with me on trades or something and I don't respond, I will get back to you eventually. If I go a few days without responding, don't think you're insulting me by poking me with another email, although it shouldn't go for that long.

So, now, onto the postal post. Not much lately, which is fine with me. I finally sorted most of my inserts by team, and if I have time this week I'll finally have a good trade bait page. Or maybe next month. Today brought two non-trade arrivals. 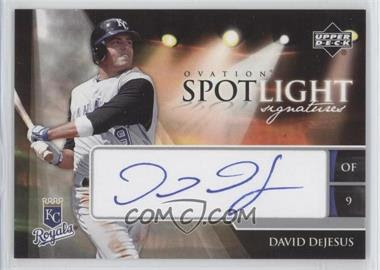 First, a 2006 Ovation autograph of David DeJesus. I'm using this COMC image, because I'm just too busy lazy to scan my own dang card. He's going in the A's autograph stack! (Which really is a stack in a little cardboard box, with a few other autographs and relics from baseball and non-sport, since most of that collection's in Georgia). 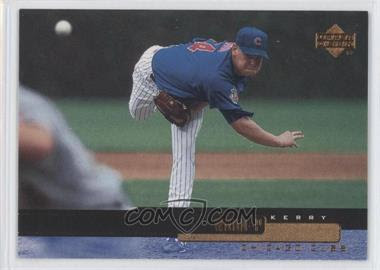 And, my 2000 Upper Deck set is now complete. I'm slowly getting some of these base set runs done, and I'm quite happy about it. Even if I don't put them together by hand. I have such a broad interest in cards, it would take more effort, money and time than I'm willing to provide to hand collate so many sets. I do have several sets that I put together by hand, so I'm not that lazy. In fact, there are about 120 sets right now in various stages of completion. At least 2000 Upper Deck looks much better than 1999 (what I think is probably the ugliest flagship Upper Deck set):